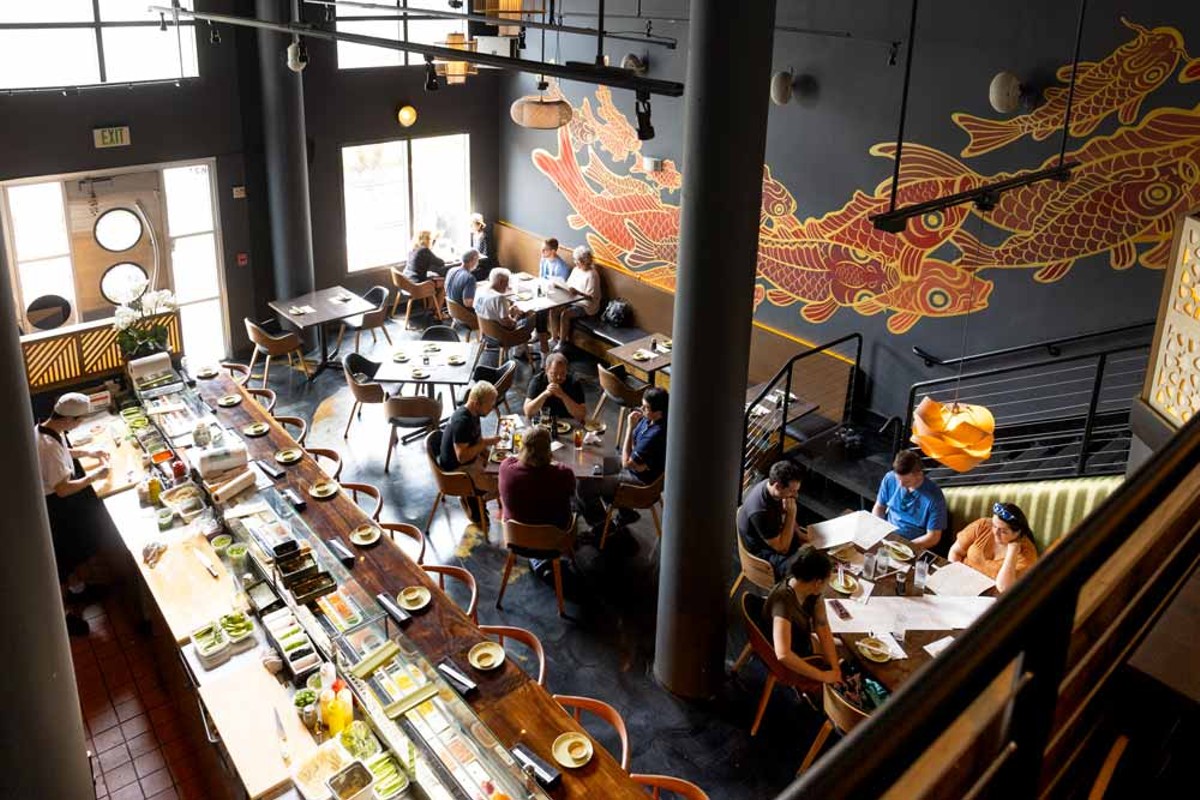 Those lamenting the closure of Shari Sushi after it served the Thornton Park community for 15 years likely haven't set foot inside its successor, Ootoya Sushi. Those who have leave a lot less devastated, vowing to explore the restaurant's menu even further. Many, including the folks I've dined here with, seem taken by Ootoya's upgraded design flourishes and moody aesthetic, preferring it over Shari's dated opalescence.

Ootoya, instead, reserves the glitter and sheen for its pretty plates of seafood and Japanese fare — and it doesn't get much blingier than the appetizer of lobster tuna wraps ($16). No pita, no tortilla, no bread of any sort in this sushi wrap duo. Rather, it's the tuna that serves as the wrapper, enveloping spicy lobster crowned with paddlefish caviar and gold leaf, and nestled in avocado puree. But we couldn't understand the inclusion of a thin raisin biscotti — it was a puzzling addition, and its crunchy sweetness only proved intrusive.

By comparison, the flavors of glistening wild king salmon topped with black truffle ($15) were simple, even bordering on bland. Those haute dots of wasabi mayo on the plate seemed more form over function, so as my dining comrade and I devoured pods of edamame slicked in garlic butter, soy sauce and chili pepper ($9), we discussed methods to improve the truffled salmon (a wee pinch of sea salt over the fish would do wonders).

We enjoyed happy hour lychee mules ($7) and rosewater-lemon drop martinis ($7) at the sushi bar, as did many others congregating in the lounge — which, by the way, was also given a significant design upgrade. It fills quickly on weekends during the very happy hours between 12:30 and 6:30 p.m. Aside from the reduced-price cocktails, we took advantage of some reduced-price rolls ­— specifically, the peanut avocado roll ($6). A vegan friend of mine suggested I try it, saying, "It exemplifies how simple ingredients can shine so bright when done right." I won't lie — the uramaki roll (rice on the outside) comprised an odd combination. With the avocado puree, it was like biting into a roll with crunchy peanut butter. No, I much preferred the toro scallion rolls served with the bluefin tuna trio ($37), featuring two pieces each of fresh and flawless akami, chutoro and luscious otoro. Real wasabi and beni shoga — julienned ginger pickled in plum vinegar — also graced the rectangular plate and needless to say, it's a can't-miss order. 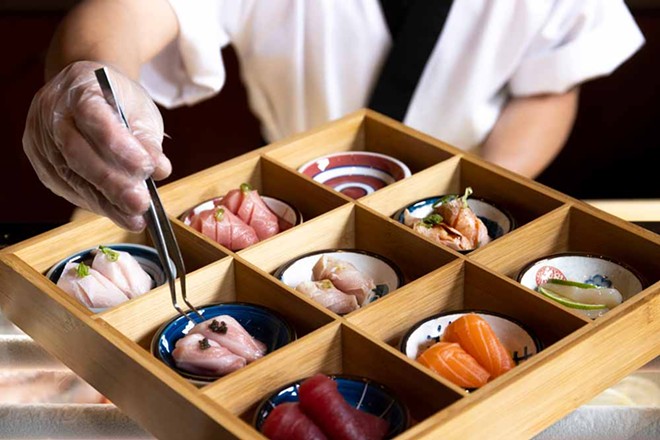 So is the Nobu-worthy black cod ($27), slicked in saikyo miso, broiled and served atop a banana leaf à la Mr. Matsuhisa. The fish is even garnished with a pink-and-white hajikami ginger spear. Hey, imitation is the greatest form of flattery, I suppose. If the cod weren't wonderfully flaky, buttery and mildly sweet, I might have had a, well, beef with the dish. But I didn't. The cod was gobbled down along with Ootoya's blue crab fried rice ($18), colored with green soybeans and yellow corn.

Lovers of specialty rolls have about 40 or so from which to choose. Personally, I'd rather see a reduction in rolls and a greater variety in their sushi/sashimi selection, but folks love sushi with cream cheese, mayo and kiwi, so concessions and considerations have to be made; it's just good business sense. What Ootoya's menu achieves, however, is balance — and it's a balance both sushi purists and roll wreckers will appreciate.