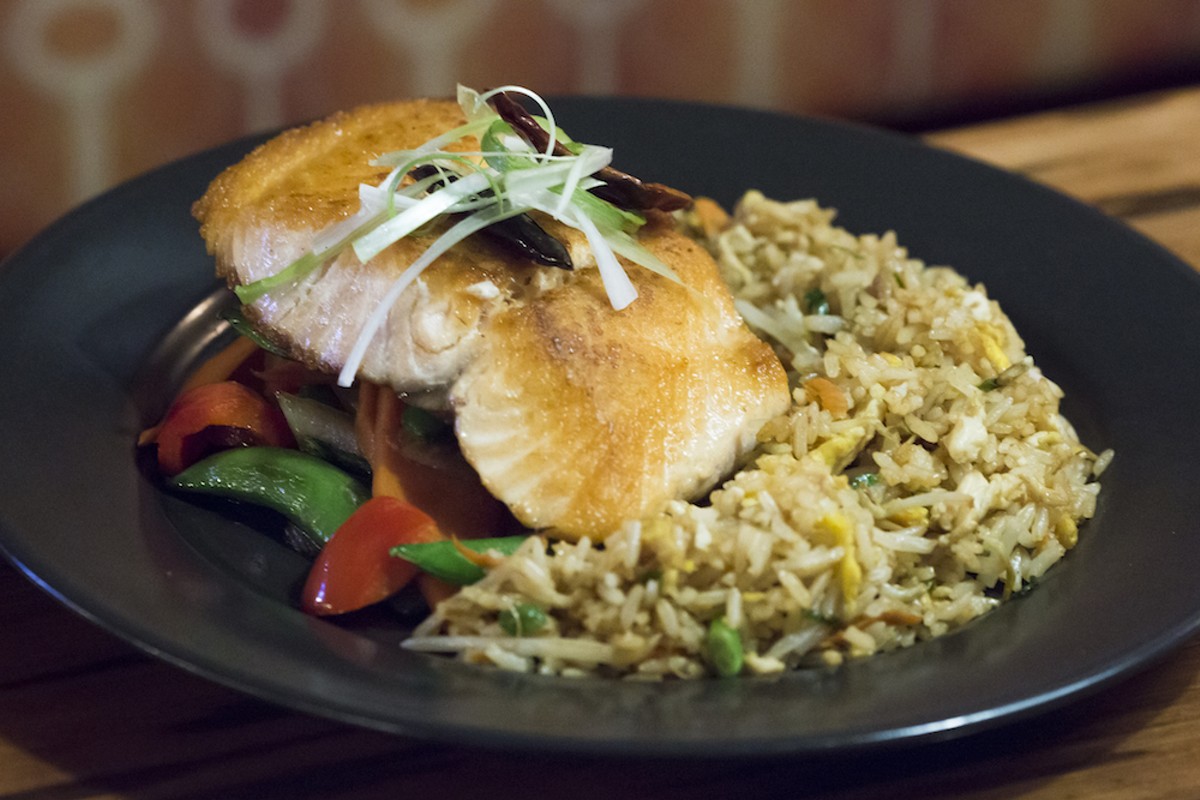 "Garp & Fuss." The name of this Park Avenue restaurant, naturally, conjures up John Irving's novel The World According to Garp and its strong feminist subtext (not to mention George Roy Hill's faithful movie adaptation). That two women, Liz Zucco and Nikki Nielsen, run Garp & Fuss was an irony not lost on the literate-minded group that gathered to join me here for dinner. In fact, the restaurant's appellation is a nod to the nicknames of Zucco's younger sisters – Alyssa ("Garp") and Amanda ("Fuss"). As infants, Alyssa resembled the baby from the movie, while Amanda was just a fussy young lass. Now both women tend bar at the restaurant, and Nielsen's mother, Karen, acts as the restaurant's pastry chef. So, yeah, women run the show here, and the productions coming out of the kitchen reveal the talents of this ensemble cast.

Nielsen plays general manager while Zucco stars as executive chef, and her infernal boiled peanuts ($5), of all things, set the stage for the fare to come. We followed the fiery Southern specialty with a fiery Northern one – hot wings ($10 for 12). The perfectly fried drums and flats flared our nostrils, which proved oddly comforting as we dined in the gorgeous brick-walled, glass-ceilinged atrium on this chilly night.

If you dined at the old La Maison de Crepes or, more recently, Bistro on Park Avenue in Winter Park's Hidden Garden, then you likely dined out here. There's an inviting bar area, as well as a small lounge area upstairs, but if you get seated in the harshly lit, booth-lined dining room, request a seat in this arresting arcade instead. It's one of the lovelier dining spots in the city – and one that puts you in no great hurry to leave.

We certainly took our sweet time enjoying dinner as the simple pub grub gave way to more sophisticated fare. Delicate crab cake bites ($12) were duly scarfed in not-so-delicate a fashion, as was a plate of wonderful butternut squash ravioli ($15) with brown butter and fried sage. A burger called "Old Faithful" ($13) lived up to its name – we'd order this dependable, flavorful standby (medium-rare!) any time. It's one of the better local burgers you'll eat.

Of course we couldn't leave Garp & Fuss without trying the eponymous Garp ($14), an Italian beef sandwich, and the Fuss ($14), a fried chicken handheld. The former is done Second City-style with a bracing giardiniera (perhaps too bracing) and served with beef jus and French fries which, I have to say, were sensational – crisp on the outside, soft on the inside. The latter appeared to have a pounded chicken cutlet as opposed to an unctuous buttermilk-fried chunk, but the hot honey and blueberry relish made the sandwich a tad too sweet for us.

No such issue with the Key lime pie ($6), served in a jar – the tempered sweetness is precisely why we loved it. Just as outstanding was the carrot cake ($6) with cream cheese frosting and fresh whipped cream. Clearly Nielsen's mom is an expert pastry chef, but the word "Volunteer" emblazoned on her T-shirt makes it clear she isn't getting paid for her services.

Making pies and cakes and getting nothing in return except for smiles and gratitude ... well, that's a familiar scene in The World According to Mom.