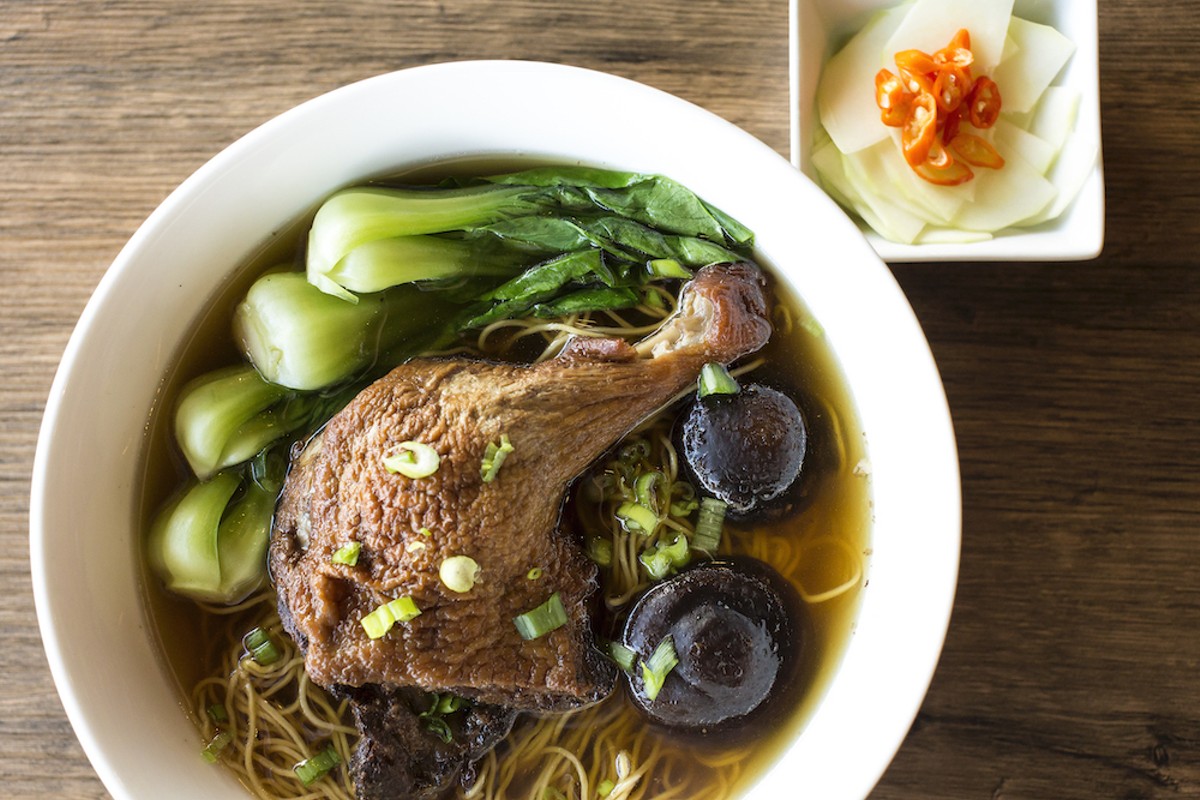 In addition to supplying the world with contrivances of death and destruction, Lockheed Martin appears to be churning out a restaurateur or two as well. Isra Sunhachawi, a systems engineer at the defense firm, along with Quan Van, have made Kai Asian Street Fare a locus of pan-Asian legitimacy. Then there's Hien Q. Pham, also a Lockheed systems engineer, who feels a need to bring a different Vietnamese restaurant-going experience to the city with Z Asian.

"I'm a latecomer to the restaurant game," he says, "so I have to be different ... and better." But beyond the modern, formica-free, gone-bamboo interior, Z also presents a focused menu of about 40 (not 400) options of nichey specialty fare. It's part of Pham's vision to bring "100 percent authentic Vietnamese food" to the masses and that, he most certainly does.

He's especially proud of the soups, all of which were engineered through the application of rigorous testing, analysis and quality control – skills he's more than familiar with. They're laboriously cooked for an average of 10 to 12 hours, and what it all boils down to are broths that strictly adhere to the "quality is our business model" ethic Pham espouses. And like Lockheed's Hellfire Missile, Z's bún bò hué ($11.95) absolutely kills. There's plenty of bovine inspiration (and slices of marinated beef) in the lemongrass-scented, egg-noodled broth, but Vietnamese ham and pork knuckles manage to make a positively porcine gesture. As great a slurp as that was, the duck noodle soup ($12.95) may very well be Z's signature dish. It's another complicated broth the recipe of which both Pham and his wife, Huong Nguyen, closely guard (phishing attempts will be rebuffed). Chopsticking the meat off the duck leg may require a bit of dexterity (my stick skills are pretty basic), but sipping that soup juice was so damned easy – stringy egg noodles, shiitakes, bok choy and all.

There were moments in between swigs when we gnawed on crispy chicken wings ($6.50 for five) glossed in sweet and sticky fish sauce and Thai chili. They may not have lived up to the standard of Kai's Korean-style wings, but these flappers were worthy nonetheless. Gleefully heeding – mid-finger lick, no less – our server's suggestion to sample the grilled pork chop combo ($11.50) led to indifference. Textural diversity aside, the chop was a bit charred (oh but those luscious bites of fat!) and neither the eggy Vietnamese meatloaf nor the thin strands of pork skin dusted in seasoned rice powder aroused so much as a shrug. No slight to the dish's preparation – it just wasn't our thing. We did take slight issue with the bánh xèo ($11.95). The savory, turmeric-tinged pancake fashioned from rice flour was a beaut to look at, and the fillings of pork, shrimp and sprouts looked just as appealing. But biting into a mildly tough and chewy pancake wasn't exactly an exercise in palatability.

There's a full bar with some luxe items – evidently some patrons like to pair their pho with high-end cognacs. Me? I'll take a Vietnamese coffee ($4) anytime. I might even end with chè sâm bo luong ($4.50) – an herbal tea dessert beverage with Chinese dates, seaweed, red beans, jelly and longan fruit (think lychee) floating in the glass. It's not for everyone, but it's a lot more interesting than cheesecake.

Lastly and, I suppose, fittingly, "Z" holds no place in the Vietnamese alphabet – rather, Pham chose the letter as a signifier for "Generation Z." Which probably means they're reading this on their iPhone X. Or not at all.