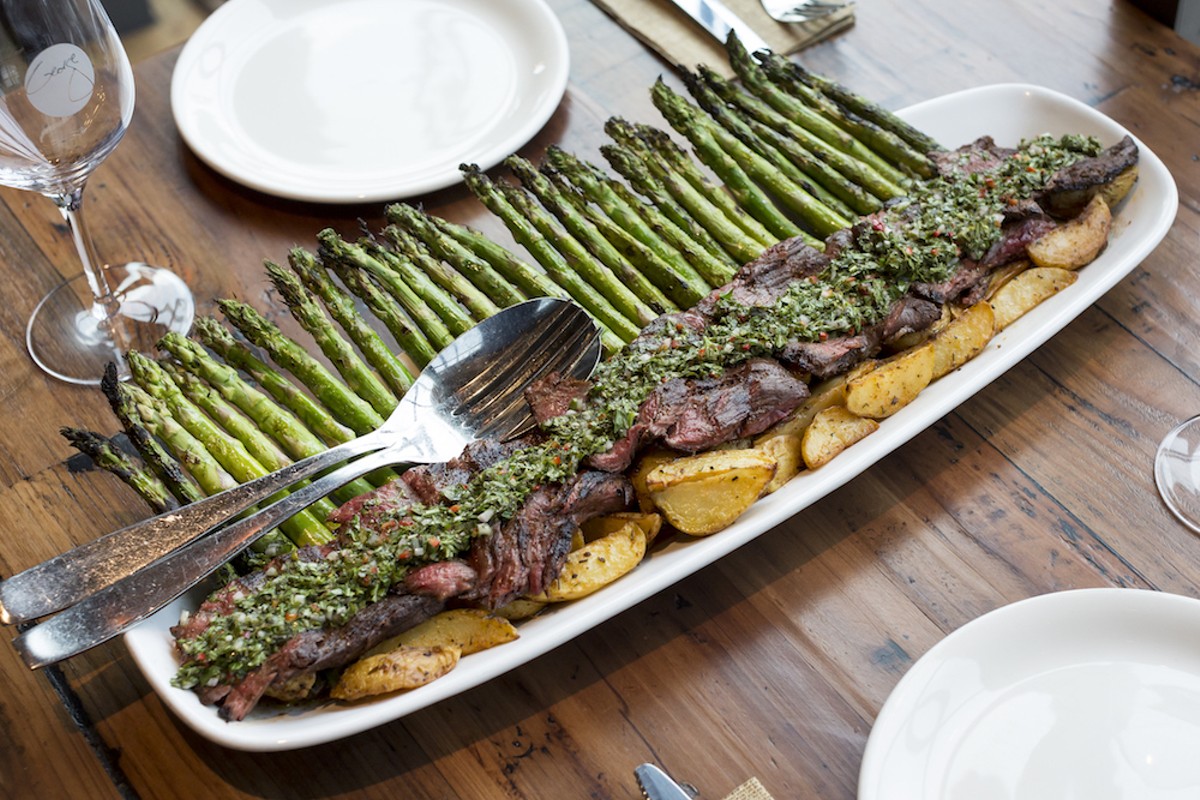 I recently returned from my dream road trip down the A6 highway from Paris to Lyon, through the endless terraced vineyards of Burgundy. We followed the tree-lined Route des Grands Crus – the winding road through charming French towns home to the biggest of big wine producers: Puligny-Montrachet, Mersault, Pommard. Since then, I haven't stopped thinking about it, wishing I could bottle that feeling.

But I realized, sitting at Wine Bar George, that it's already, literally, been bottled. No need to return to France; those feelings all came flooding back to me as I tasted the ruby-red 2016 Vincent Girardin Burgundy our server recommended. "You have to taste this," I said to my husband, who'd accompanied me on our road trip, along with three other friends. "It's our vacation."

George Miliotes is one of the 140 wine professionals in the U.S. known as Master Sommelier, and he's the one who showed us to our table. He's also an Orlando native, which makes his omnipresence understandable – most other celeb chefs who've opened at Disney only occasionally make appearances. 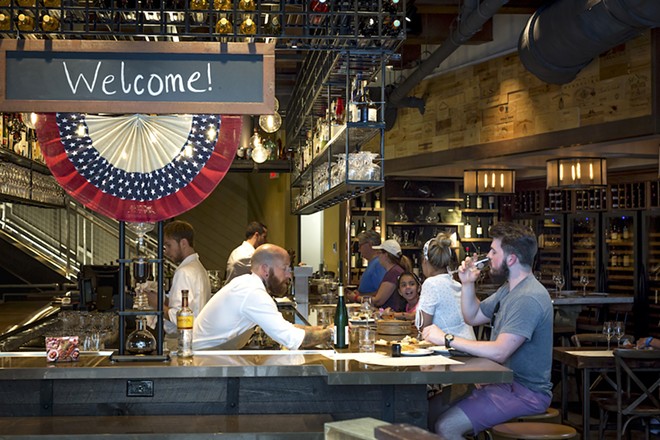 As he guided us upstairs to our seats, I told him we'd just returned from Burgundy. He asked me if there was a particular highlight. "The cave of Montrachet," I said. The Master Sommelier responded, "Well, that certainly doesn't suck."

This kind of elegance-meets-earthiness that Miliotes personifies is what you'll find at his restaurant and wine bar. It's baked into the architecture, the service and the menu offerings, both in what you'll sip and what you'll savor.

The restaurant feels like the caveaux we visited in France – cozy and cool, both in temperature and in vibe. There's no mistaking that wine is the star here. The entire first floor is occupied by a few high-top tables, but overtaken by the gigantic rectangular bar. Most of the eating takes place upstairs, in two dining rooms and a New Orleans-style terrace with some four-top tables. If you want one of the best views at the Springs, request a table out there.

You'll want to spend some time with the wine list, but you'd do just as well to let your server guide you through it. They're all well-versed in the language of the grape, and are happy to figure out exactly what you should be sipping. I asked about a varietal I'd never heard of – a $9 French white from the "on-tap" list – and our server threw out buzzwords like "minerality," "herbaceous," and then said, "it's like a Pinot Grigio without the boring." Sold.

There are plenty of wines offered by the glass – Miliotes wants you to taste as much as possible – and there are lots of bottles within budget, starting at about $60. There's also an "Outstanding by the Ounce" section, which highlights the best-of-the-best bottles from all over the world in 1-, 3- and 6-ounce pours, plus bottle prices. Dying to try a 1996 Chateau Margeaux, but the $2,400 bottle price tag is a bit out of reach? George lets you taste the epic vintage for $100 per ounce. OK, that's still steep, but there are plenty of excellent wines on the list to try for a song.

The food menu features the same kind of approachability. Small plates come out in a flash. The house-made meatballs ($14) are downright pillowy, gently plopped in a pool of bright tomato sauce on a bed of three-cheese polenta so cheesy, it sets up almost immediately upon hitting your cool side plate. The fork-tender porchetta-spiced pork cheeks were dreamy, too, in the way that a perfect pot roast soothes the burdened soul. The menu listed an orange gremolata on top, but we didn't catch any of that on our plate. We didn't really miss it.

My favorite small plate was the grilled octopus salad ($18), which is presented more like a ceviche than anything else: julienned octopus studded with diced celery, green olives and red bell peppers. On the first bite, I immediately imagined myself sitting on the promenade in Valencia overlooking the Med.

Necks craned from other tables when our entrée appeared: the family-style wine-braised chicken ($59), an entire, purple-hued chicken served in a large cast-iron-style casserole with mushrooms, pearl onions, Yukon potato hash, asparagus and its own braising liquid perfectly transformed into sauce. We didn't need the serrated knives on offer. That chicken was a pièce de no résistance. The diners at the table to our left even came over after they'd paid their check to ask us what we were eating. The order envy was palpable.

To finish, we indulged in – what else? – more wine, with the Chocolate Experience dessert. I'm no white chocolate devotee, but paired with a Spanish muscat, I'm a convert. The milk chocolate came paired with port, and the dark chocolate with a heady, aromatic merlot. We also ordered olive oil cake ($7) with candied kalamata olives and lemon mascarpone. I asked our server for a pairing, and he surprised me with a Madeira, brimming with raisin and a briny finish that complemented the olives.

The very first time we visited Wine Bar George after it opened, we sat out on the terrace and noted a young couple who sat down at their table, took a brief look at the menu (and likely at the prices) and surreptitiously got up and left. This isn't turkey legs and Butterbeer. But it is an ideal way to escape the theme park atmosphere and sit down to what will likely be a perfect meal, or at the very least, a perfect glass of wine.