Admittedly, when celeb chef Gordon Ramsay's restaurant group announced he'd open a restaurant in Orlando, I expected something a little glitzier — more akin to Jose Andres's Jaleo or Morimoto Asia. He is the most-starred chef in the Michelin guide, after all.

Well, this ain't that. Ramsay's family-friendly chip shop has taken over one of the smaller quick-service restaurant counters at Icon Park, and inside the adorable, ultra-Instagrammable entrance is an ordering counter, a few bar seats, and a self-serve fountain drink and condiment station inside. Also, air conditioning.

The umbrella'd, open-air patio, though, which serves as the main dining space, features second-to-none views of the Wheel (fka the Orlando Eye) — and an excellent vantage point for people-watching.

After a taste of some of the compact menu's highlights, it's clear the concept is a love letter to the fish supper — classic British comfort fare — but Ramsay has put just enough fancy-pants magic on it to make it interesting for both foodies and families.

The generously portioned cod is robed in rice flour batter, which makes for a light, crispy coating. A source tells me they'd originally tried beer batter but went with the rice flour alternative for an easier appeal to parents. The original Fish Combo comes with sea salt fries (unfortunately, not hand-cut in house, but still tasty) and choice of two sauces — more on those below — for $17.

You wouldn't be an "idiot sandwich" to order the Lobster & Shrimp Combo for $21, though. The two pieces of batter-fried lobster (shells and tails left intact for effect) and gigantic fried shrimp are luxurious enough for the price tag. The signature Fishwich Combo (above), two pieces of fried cod between mini naan — a nice nod to the Brits' love of Indian cookery — topped with avocado crema and fresh tomato relish will set you back $18.

Clifford Alejos
Lobster, jumbo shrimp, chips and two sauces for those with Michelin-starred palates.
All six of the signature sauces are made in house. I particularly liked the Curry Mango and the Southwest Ranch, but it was Gordon's Tartar Sauce that I kept going back for. It's herbaceous and addictive, spiked with fresh dill and parsley and minced cornichons — nothing near the mayo + pickle relish you'll find elsewhere. 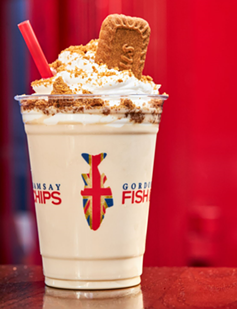 Gordon Ramsey North America
The Biscoff cookie-butter shake
For something sweet, the shop offers two milkshakes: Sticky Toffee and Biscoff, topped with two of the namesake cookies. I loved both.

Gordon Ramsay Fish & Chips is now open to the public at Icon Park at 8391 International Drive.