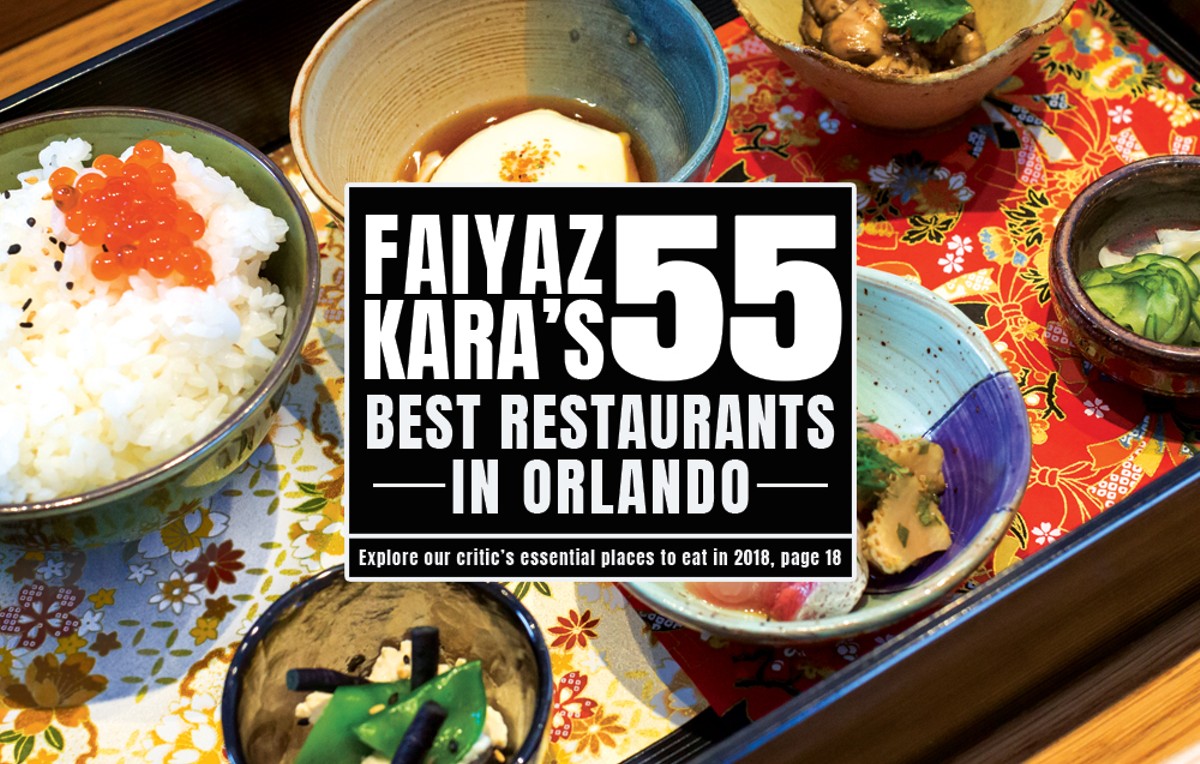 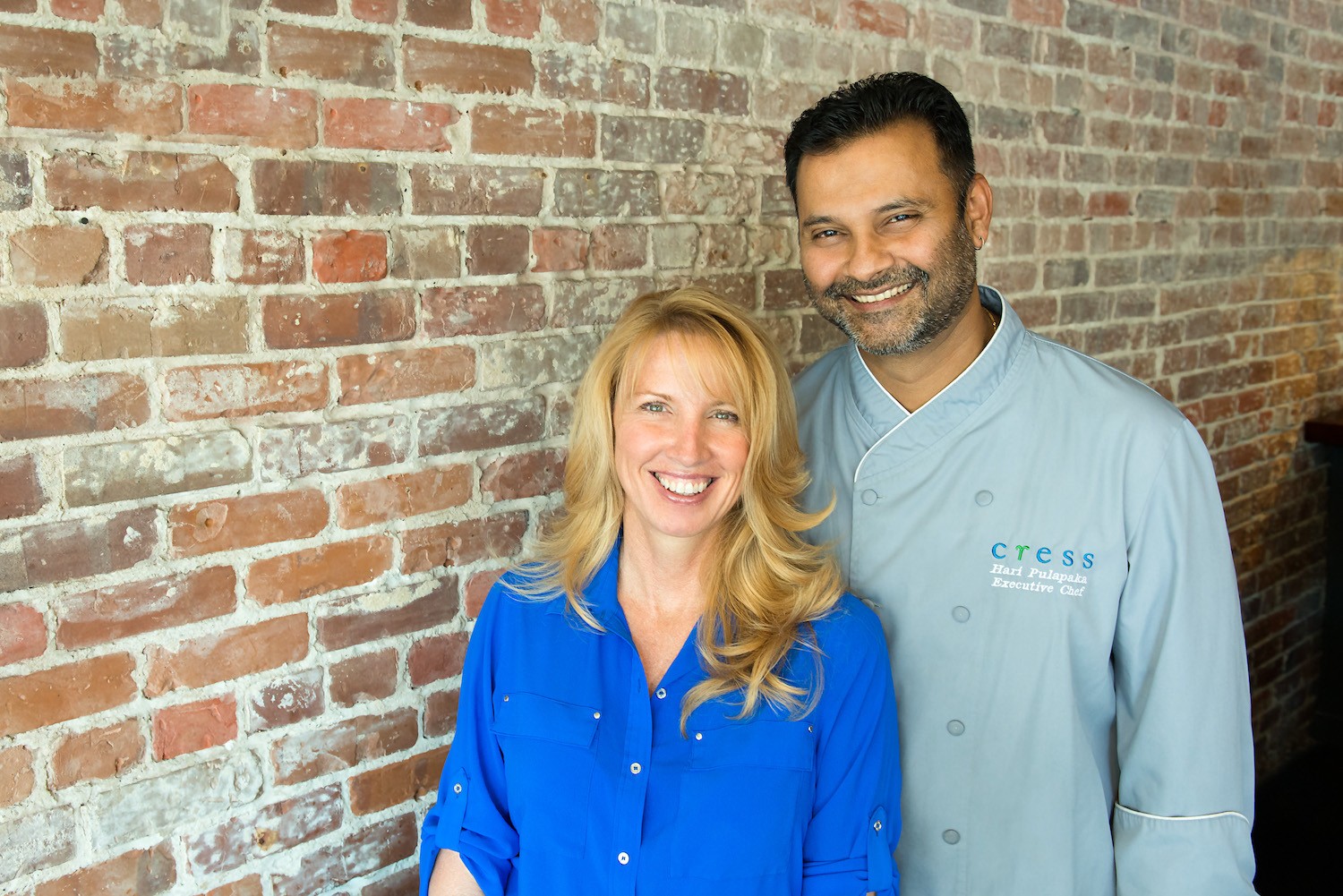 Sure, there have been a few concept changes in the decade-long life of this DeLand charmer, but in its current state as a "ticketed events-based restaurant," chef/owner Hari Pulapaka not only probes and examines the cuisines of the world in his "global kitchen" but, more so than any other chef in Central Florida, does so while raising awareness of socio-political issues and championing causes related to food waste and sustainability. Whatever the cause, Pulapaka's menu creations are always interesting – Libyan camel-duck kebabs, Moroccan quail bisteeya, tempeh kofte etoufée – and their preparation indicative of his methodical and exacting nature (Pulapaka is also a mathematician, after all). Wife Jenneffer curates a dynamic wine list and, together, the duo bestow the sleepy hamlet with a semblance of cosmopolitan gentility. (cressrestaurant.com)

High-end chophouses are a dime a dozen in this town, but the sexy Spanish steakhouse on the 17th floor of the Four Seasons Resort Orlando is the only one worth braving the infuriating hordes of driving-challenged tourists for. A gin and tonic graced with juniper, Key lime and botanicals proves pacifying, but by the time you commence indulging in modern takes on Basque and Spanish staples, as well as USDA Prime cuts of beef, all is forgotten. The menu, conceived by the resort's executive chef Fabrizio Schenardi and executed by chef Gabriel Massip, comprises tapas (I can't get enough of the celtuce with chipotle and romesco), raciones and beefy cuts ranging from 30-day dry aged bone-in ribeyes to A5 Miyazaki wagyu. There are entrées (the duck breast with almond spätzle, seasonal fruit and a foie emulsion, for one) that wow as much as the ceiling-spanning art installation resembling a matador's red flowing cape by Peter Genetenaar. Cap your meal with sweets by Rabii Saber, one of the country's best pastry chefs, and a superlative meal will be had. (fourseasons.com/orlando/dining/restaurants/capa) 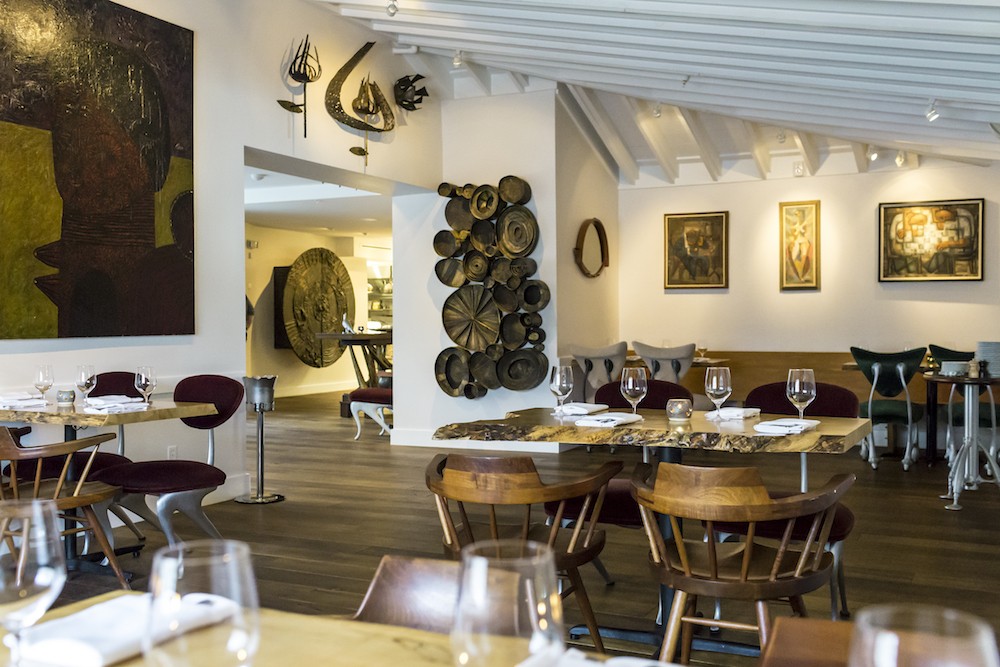 Luring the state's most acclaimed chef to Mount Dora – far from the burgeoning Olympic Village of celebrity chefs that is Disney Springs, where throngs flock for a rare glimpse of a TV hotshot and then settle in for a meal as fulfilling as an M. Night Shyamalan flick – was nothing short of a coup for this sleepy little town. At 1921 by Norman Van Aken, modernism supplants the mouse ear as the prevailing motif, with borrowed works and furnishings from the Modernism Museum next door taking eye candy to a whole new level. More importantly, 1921's menu reflects a genuine attentiveness to the flora and fauna of the Sunshine State. Here, Van Aken acts as our very own Michel Bras, conceptualizing a multiculti menu inspired by the restaurant's immediate surroundings, with talented chef Camilo Velasco realizing the vision. (1921nva.com)

I know what you're thinking: A pizza joint in the top 10? Really? If you've sunk your pearlies into one of Bruno Zacchini's neo-Neapolitan pies, then you know it's justified. Fermented dough is scorched in a wood-fired, Ferrari-red Pavesi oven at about 900 degrees Fahrenheit until properly leopard-spotted, but the toppings, comprising new, at times seasonal, flavor combinations are where Zacchini gets creative. There's enough mod to entice tattooed millennials to shred a pizza topped with maple syrup, blueberries and guanciale, or one with charred peaches, romesco, pickled jalapeños and Volpi soppressata. Pizza is one of those foods that can divide households, but Zacchini is happy to straddle the line between purist and progressive. (pizzabrunofl.com)

Having three Japanese restaurants appear in the top 10 is reflective of the culinary one-upmanship taking place among local chefs and restaurateurs of the genre. And any conversation about the finest sushi restaurants in town will inevitably turn to the innovative cuts at Chau Trinh's spirited anime-themed eatery in Oviedo. Staging at Eric Ripert's Le Bernardin and Ronny Emborg's Atera in New York City, among others, has helped fuel Sushi Pop's progression and innovation, which starts with the prized cuts of seafood Trinh uses in his dazzling moriawases and omakases. Cocktails can get experimentally fun, but don't let the whimsical libations, hot-pink hues, manga art and anime on the TVs fool you – Sushi Pop takes its fun very seriously. (sushipoprestaurant.com)