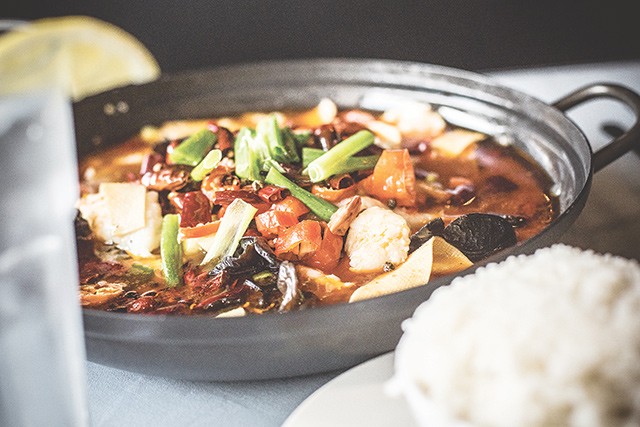 Heading into one of the hottest (literally) Chinese restaurants in the city on a Sunday evening, I was certain we’d be met with the sort of unrelenting cacophony, unrestrained gorging and cutting pungency one would find at a Nanking New Year’s Eve buffet. But to our utter amazement, Chuan Lu Garden was bustle-, body- and fragrance-free. We actually thought the place was closed and sidestepped into the neighboring Ginza Japanese Steak House & Sushi Bar (the two restaurants share a narrow hallway), but we were met by a waiter who enthusiastically ushered us back into the barren dining room.

Once we were seated, our delightful Beijing-born waitress presented us with menus that listed Chuan Lu’s signature Sichuan dishes on the front pages and Americanized Chinese standards on the back pages. Sichuan cuisine, in case you’re unaware, is known for its use of brazen Sichuan peppercorns, wee buggers that produce a sensation akin to rubbing Tiger Balm on your tongue – aromatic, invigorating, tingly.

Biting into one creates a nice tickle on your licker, and our waitress made sure the kitchen didn’t dumb the dishes down for us. Evidently, servers have been told to serve non-Chinese patrons less intense versions of their dishes, but we got the real deal.

After some proper direction from said waitress, we soon found ourselves diving into a heap of spicy pork ear ($4.95) and a plate of roast beef, stomach and tendon ($7.95) in chili sauce. If it all sounds culinarily kinky, rest assured, it was.

The crunchy, thinly sliced pork and beef cuts, both served cold, curled our collective hairdos with their lacing of red-hot tien tsin peppers, but it was the platter of cumin lamb ($13.95) that afforded us our first taste of those Sichuan peppercorns. To describe the dish as “bold” would be an understatement, what with the heavy cumin seasoning, enough red-hots to burn a hundred guts and, of course, a healthy smattering of those explosive little balls resembling miniature World War II mines. If you tried hard enough, you could discern the flavor of the tender morsels of lamb, but the ferocity of this dish is what made it our favorite.

Ridiculously rich, though not quite as rousing (even with those peppercorns), was the double-cooked pork ($10.95) with hot sauce. I don’t think we’d ever seen so much pork belly on a plate before and, needless to say, there’s only so much of it one can eat. This one required a big takeout box. Another menu star was the Lanzhou-style beef noodle soup ($8.50). Of the three noodle types offered – hand-pulled, thick-cut and rice – we chose the hand-pulled. We were even invited into the kitchen to witness the noodle manipulation – a very welcoming gesture, to be sure, given that most of the tables were, all of a sudden, occupied. The soup, with its slices of brisket, cabbage, cilantro and whole peanuts, was nothing short of fantastic and, dare I say, as good as any soup (pho or otherwise) we’ve had in Orlando.

If there was a dish that fell flat, it was the boiled salted duck ($5.95), a starter of moist, very fatty, stimulant-free chunks that just seemed dull when compared to the other items we sampled. We weren’t exactly wowed by the lone dessert offering either, but the tempura-fried vanilla ice cream ($4.95) helped temper the burn, even if it was a temporary relief.

Allow me to state the painfully obvious: If you can’t stand the heat, you had best stay away from this kitchen.