Bao's Castle in SoDo offers a whole lot to like

I don't know a bloody thing about Nintendo's Mario franchise (I play Trivial Pursuit on our Nintendo Switch), but those familiar with the most popular console game in the history of ever will no doubt recognize the fire-breathing tortoise creature busting through the faux stone wall inside Bao's Castle. It's Bowser, a character who, yes, lives in a castle and is, evidently, Mario's arch-nemesis. He's a huffy puffer who's rude and mean; he snarls and does so without a protective face covering; and, yeah, he's a bit of a Karen too.

Thankfully, everyone else working inside this blond-wood bao house in the Sodo Shopping Center was properly masked, as were we prior to seating ourselves at a high-top. I should note that Bao's Castle is seating at 100 percent capacity, but given no one else was dining inside, we felt safe enough stuffing our yaps with bao. The "Sidestepper" ($4.75), combined the crunch of fried soft-shell crab with the hellfire of honey sriracha and spicy apple kimchi. It's the kind of bite that would easily ignite Bowser's conflagrating esophagus. It's also the photo-worthiest option, with those crabby legs sticking out of the fluffy white bun.

Owner Danny Ngo, who learned a fair bit about the restaurant business running Sodo Sushi Bar & Grill with his parents, is clearly out to serve bao of the utmost distinction. He consulted with Danny Nguyen, the talented head sushi chef at Kabooki Sushi Sand Lake, to develop the menu, and it's proven to be a shrewd decision. Like Bowser's temperament, the bao here are absolute fire.

The "Mad King" ($4.50) cuddles a luscious slab of pork belly that's been cooked sous-vide for 24 hours and dressed with pickled daikon and cilantro; the crispy panko shrimp ($4.50) is judiciously embellished with Japanese guac, bacon jam and pickled onions. No question the bao are crafted with diligence and care, and none of what we sampled was overly sauced or goopy in the least. Our favorite was "Baoser's Buddy" ($4.25) simply because of the incredible amount of flavor concentrated within the chunk of Korean short rib. Plus, the kimchi stung with plenty of heat, and the scallion strings were a nice visual touch.

The sweet Taiwanese glaze on the fried chicken ($4.25) made it the most innocuous bao of the bunch we sampled, and one we'd brush aside for the "Baby Yoda" ($3.99). Its meatless presentation, by comparison, offered a lot more bang for the buck with sauteed shiitake and button mushrooms soaked in umami and a perfectly crisp onion ring drizzled with a bold black pepper sauce.

In between bao bites, we pecked away at a side of fried Brussels sprouts ($3.75) that deserve a sentence of praise for being tossed in bacon-kissed honey and served with a yuzu tartar sauce. I also have to laud the panko shrimp rice bowl ($9.99) dressed with ajitama, furikake and kimchi cucumber for how well it traveled. Sauteed mushrooms and bacon jam rounded out the dish.

Honestly, most everything at Bao's Castle is worthy of praise, including the inviting bar and its craft quaffs from Orlando Brewing on tap. The restaurant is also open 24/7 (that's right, 24/7!) and offers a late-night happy hour from 10 p.m. to 1 a.m. with $3 baos and $4 beer and wine. So, really, what's not to like? At the risk of fanning Bowser's flames, I have to say that everything we sampled at Bao's Castle seemed a lot less like that raging tortoise and a lot more like Mario. That is, Super. 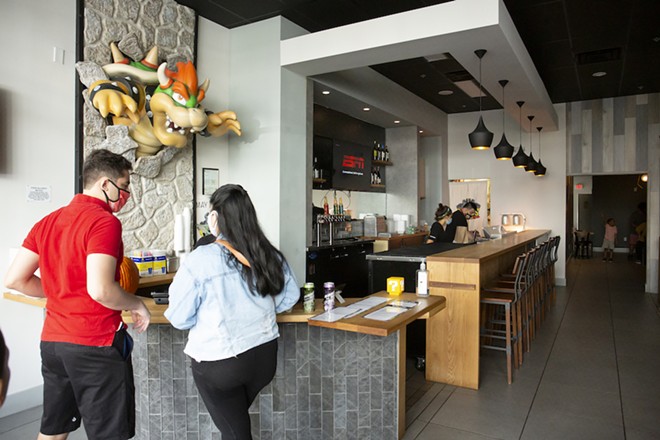