With debts mounting, the owners of the former Nick Hotel speak to Orlando Weekly on what the future holds Updated for clarity on the valuation by the Orange County Property Appraiser.

Updated to include new comments from Urban Commons regarding the value of the Orlando site.

After a tumultuous 2019, it looked like Urban Commons was heading into calmer waters this year, but of course (like everything else) that quickly changed. The L.A.-based real estate investment and development firm is best known in the Orlando market for their 2014 purchase of the Nick Hotel for $41 million, now known as the Holiday Inn Suites and Waterpark. Outside of Orlando, Urban Commons owns several other hotels, mostly focused on business travel, and operates the historic Queen Mary ship in Long Beach, California.

For World War II veterans, the Queen Mary ship, which now serves as a tourist attraction with an onboard hotel, is important thanks to the role the ship played in transporting tens of thousands of troops into the war.

The $143 million deal for the Queen Mary was the capstone of a years-long expansion for Urban Commons that included its first foray into nonbusiness travel. The Nick Hotel purchase two years prior was an indication of what was to come with Urban Commons. Operating as the world’s largest Holiday Inn Resort, the Holiday Inn Suites and Waterpark has 777 rooms across 24 acres and sits just across I-4 from Walt Disney World. 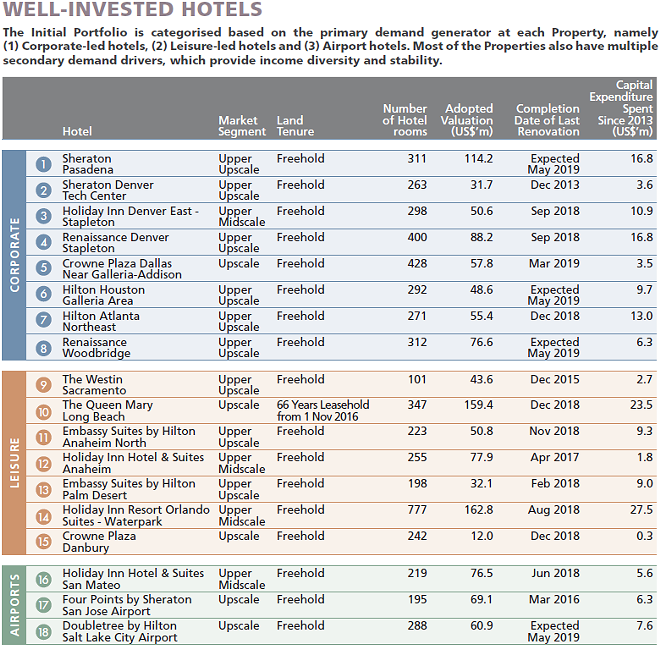 The IPO in early 2019 wasn’t a success, fetching at least $100 million less than had been expected. At the same time, the Queen Mary was continuing to cause troubles for the firm, but soon it would become the inspiration for one of their most significant moves yet in Orlando. Image via Ken Story
The 2018 Terror at the Inn family Halloween event at the Holiday Inn Suites & Waterpark
After successfully hosting various seasonal events at the Queen Mary, Urban Commons brought those concepts to Orlando. The first was a family-oriented Halloween event that was a failure by most measures. But last year, a more adult-oriented Dark Horizon event debuted that was similar to the Dark Harbor event that has become a must-visit for many in the LA area. At the time that Dark Horizon debuted in Orlando, there were questions on the financial situation at Urban Commons, with bills mounting and Long Beach unhappy with how the company was handling repairs of the Queen Mary.

After Halloween, things didn’t get any better for the company with more financial issues and Long Beach continuing to have problems with Urban Common’s handling of the historic ship. 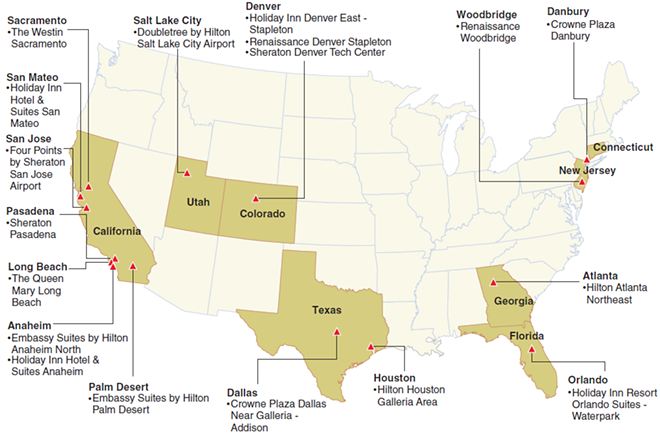 Image via Eagle Hospitality Trust IPO Prospectus
Eagle Hospitality's portfolio as of May 2019
By late April, five hotels saw their management team leave, and all but two of EHT’s 18 hotels had received notices of default from master lessees under their hotel management agreements, including the Queen Mary in Long Beach. Meanwhile, Wells Fargo sent a notice identifying multiple events of default on a $35 million mortgage loan just weeks after Bank of America sent a notice for immediate repayment on a $341 million loan. By the end of April, a third-party firm, FTI Consulting, was brought in to assist in restructuring Eagle.

On Thursday, May 7, those familiar with internal operations at Urban Commons reported to Orlando Weekly that an important meeting was taking place at Urban Commons LA-headquarters. At the same time, multiple cars were seen outside of the management office of the Orlando property, where 325 employees had been laid off the month prior. The following morning, the Long Beach Business Journal reported that the company owed multiple California cities hundreds of thousands of dollars in unpaid taxes. In that article, it noted that Orange County, Florida, officials declined to comment. Public records show the gross tax total for the Orlando property being $1,090,055.91 in 2019.

In the past few months, at least two lawsuits have been filed against Urban Commons, and its related partners, for unpaid bills at the Orlando property. In one case, where Urban Commons’ Orlando company, UCCONT 1, was found to owe more than $420,000 in unpaid cleaning bills, a proposed writ of garnishment is now moving forward. In the other still ongoing case, Urban Commons, along with its management partner Evolution Hospitality, reportedly owe more than $118,000 to a staffing agency.

Now with rumors running rampant on what the future holds for Urban Commons, the company issued a statement to Orlando Weekly to address many of the concerns regarding the future of the Orlando property and the company. First and foremost, they assure the Orlando Weekly that the Orlando site, now with an assessed value of $71 million and an estimated annual RevPAR of $22 million according to the Orange County Property Appraiser's office, is not for sale. The company states it will continue to focus on its family-focused assets, including the Orlando site. “Urban Commons is committed to its properties in Orlando and Long Beach — these assets are in prime locations, and Urban Commons is excited to build on our legacy initiatives, unlocking each property’s potential by driving guests, adding value and increasing revenue.”

In discussing the 16 hotels now with default notices, Urban Commons noted, “We aren’t able to comment at this time but we look forward to providing more information at a later date.” Though they did note that when considering management leasees for a property they look for the most efficient team available. “Urban Commons selects hotel managers based on the most efficient strategy or management team so, per usual, changes in management companies may take place in order to drive revenue and reduce operational overhead.”

Regarding the site in Orlando, the company was unable to tell Orlando Weekly when it may reopen or what the future holds for the site. “As of now, operations at Urban Commons’ properties in Long Beach and Orlando are suspended and will remain so until it is deemed safe.” Going on, the statement from the company to Orlando Weekly explained, “While hiring takes place at a property-level, Urban Commons believes that furloughed or laid-off employees at all Urban Commons’ portfolio properties will be recruited as the hotels reopen.”

One thing that the company is still unable to commit to is if Dark Horizon will return this year. “While there is uncertainty around events globally, the health and safety of our employees, guests and communities must come first. We will follow the recommendations of our local and state governments, and look forward to announcing upcoming events at our properties once it is safe to do so.” Going on to explain, “As of now, events at all of our properties are on hold. Once Safer-At-Home restrictions are lifted, and it is deemed safe for large gatherings to take place, we will revisit our events calendar, including Dark Horizon in Orlando.”

Even with multiple lawsuits and an extremely rocky 2019, Urban Commons remains persistent that they will recover. In response to questions regarding a potential bankruptcy, the company responded, “Despite an extremely volatile market, we are confident in the ongoing financial viability of Urban Commons as well as our growth strategies for 2020 and beyond.”

For now, the situation at Urban Commons and its Eagle Hospitality is just beginning to come to light. With Florida beginning to reopen and no indication when business travel will rebound, the question will be if the company can lean on its nonbusiness travel Orlando property as it looks to address the nightmare that the Queen Mary has become.

UPDATE (5/27/20 7:25 PM): Urban Commons has responded to the $71 million valuation of the site from the Orange County Property Appraiser.

The statement from Urban Commons to Orlando Weekly, regarding the current valuation of the property by the Orange County Property Appraiser, reads: "A public assessor will not provide the true value of a property, the figure you have stated is not correct. We started negotiating the acquisition of the underperforming Holiday Inn Orlando Suites soon after the last recession. Over five years, Urban Commons invested more than $30MM converting the property into what it is today. It took us three years to renovate, rebrand and relaunch the property, unlocking and adding significant value.”


It should be noted that in 2016, Urban Commons sued the Orange County Property Appraiser's office for "exceeding the market value" of the property in its appraisal, stating that appraisal also included "the value of certain intangible property."

Sales records show Urban Commons purchased the property in 2014 for $41 million. Since then they have invested "more than $30 million" in upgrades including debuting new hotel rooms earlier this year.

Image via Ken Story
A July 2019 photo of the Queen Mary with paint chipping just months after a paint job was finished.
_
Please follow CDC guidelines and Orange County advisories to stay safe, and please support this free publication. Our small but mighty team is working tirelessly to bring you news on how coronavirus is affecting Central Florida. Please consider making a one-time or monthly donation. Every little bit helps.