Director Michael Grandage is a legend in both London and New York, having been honored by the Tony, Olivier, and Drama Desk awards for helming serious, star-studded dramas like Red and Frost/Nixon, as well as acclaimed revivals of Grand Hotel and Guys and Dolls. So when he spoke to me last week from his home in England, I would have loved to interview him at length about his work with Jude Law on Henry V, or The Cripple of Inishmaan with Daniel Radcliffe. But our half-hour conversation concentrated on his latest creation, the spectacular Broadway tour of Disney's Frozen that's currently chilling at Orlando's Dr. Phillips Center through Sunday, March 6.

What was your knowledge of Disney and Frozen prior to directing this show?

I had followed since my childhood all of the Disney cartoons, as they were called then — they've morphed into "animated features" now — and I've followed them all over many, many years. I like the medium of animation, and that's been my way into Disney. But I saw Frozen when it came out, and then didn't see it again [until] I got a call to ask am I interested in the stage version.

Why do you think Disney approached you to direct Frozen?

One of the things that [producer] Tom Schumacher and the Disney Theatrical wing of Disney do is they really love working with theater makers. Julie Taymor on The Lion King started something for them where they engage with probably the most serious theater makers on the planet. ... Nobody was wanting Frozen to be overly serious, but what they did want was a kind of serious application of the form. 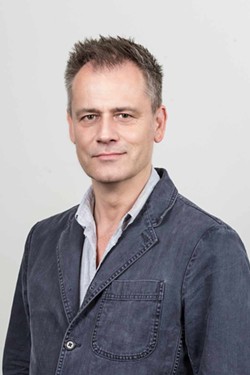 How did you assemble your multicultural cast in the shadow of the original film's famous voice stars?

I didn't think it was unlike putting together a production of [Shakespeare's] As You Like It. You're looking for a group of actors who come from all ages or backgrounds [and] you're trying to find the very best people. But you're also trying to identify, particularly in the leading roles, people who may well become famous, because you're getting them at a point in their career where that is still in development. I think that one of the joys of Frozen is its very young set of leads, and if you can get them at the right time, you can get before they break out.

What was it like collaborating with composers Kristen and Robert Lopez and screenwriter Jennifer Lee on the screen-to-stage adaptation?

What I got when I arrived was three creators from the original film who were wide open to suggestions, which I suppose could have gone the other way. ... It was a very highly collaborative process of really opening the film right up and creating all the new songs. ... It was a phenomenally rewarding experience, but for me it was the reason that I wanted to do it, because I'd never had the joy of coming to a [musical] where everything hasn't already been predetermined.

How did puppet designer Michael Curry help bring the characters of Olaf the Snowman and Sven the Reindeer to life on stage?

A very rewarding part of the process for all of us was having this collaboration with [Curry] from developing basically something at the start that was just bits of things sewn together. And out of that, trying to work out how it goes in the next direction. There was never any sense that we were presented with a puppet; we were always working with him in collaboration to get to where we need to get. ... His work ethic is phenomenal, and he really is a researcher and developer in his studio. He just keeps working on stuff and making it better, and what you're seeing on tour has already developed highly since we opened on Broadway [so] things continue to be developed by Curry going from Broadway to the tour.

How did the pandemic impact Frozen on Broadway and the national tour?

The pandemic brought Broadway to a sudden close, which was very sad. ... We'd just done the change of cast after a couple of years, and they were just starting; then the pandemic came and the show closed, and has not gone back. So what's interesting is that the tour has become the American production of Frozen.. ... The American production is now represented by the tour rather than Broadway.

Disney has made something positive out of that, I think, because there comes a wonderful sense of pride in thinking the only production you can see in America is one that is going to individual cities, sitting down and engaging with the whole nation, as opposed to the nation somehow believing they have to come to New York. I think at some level, that's turned into a very positive message.

The tour is actually a big beneficiary [of] all the things we learned over an extended period to get right on Broadway. The one biggest change is that we created a whole new number for the tour that had never been seen on Broadway before. ... The two leading ladies didn't actually sing a song to each other; they didn't sing together. So the composers went away and wrote a song called "I Can't Lose You," that was premiered in the touring version.

What does Broadway's Frozen offer for someone who has already experienced versions of the film in Disney's theme parks or cruise ships?

There is a level of expectation for audiences that they want to see spectacle. What Disney takes out on tour, they wish to take something of the level of Broadway out on tour, [and] they certainly made sure that our budgets for producing the touring version allow us to do full-on spectacle. A number like "Let It Go" has to involve a transformation, and it obviously has to be done in a way that makes people fill up with wonder and excitement. And they've given us the tools to be able to do that.

I don't think anybody wants it to be exactly like the film; I think they want a different experience. And so that gives us, in a way, permission to do things differently. ... That's how we've approached it really, which is deliver "the same but different," if you like: Make sure that they get the DNA of what they want, but make sure that you've augmented it with something that is unique to the live performance.