I've been to Bombay more than I've been to Los Angeles, and I've been to L.A. enough. So I felt well-prepared for the combination of subcontinental superficiality that the Miss India International pageant (Nov. 30 at Hard Rock Live) should have been. After all, we are talking about a beauty pageant, and Bombay is a city that defies all the hokey Western stereotypes about India as a homespun land of gurus and salt-of-the-earth peasants.

India (though certainly weighed down by poverty resulting from endemic political corruption) is perfectly capable of meeting and exceeding America's finest when it comes to opulent emptiness. Though cities like New Delhi and Bangalore can hold their own when it comes to parties and flash, it's Bombay that spins out the plastic fantasies that provide dreams of fame for the country's teeming masses. Like Hollywood, Bombay is a city that runs on star power and whether it's MTV India, the omnipresence of film posters or some star DJ spinning trance at Fire 'N' Ice, the city -- like Tokyo or New York -- always feels as if it's spinning on an entirely different axis from the rest of the world. Having briefly rested on that axis by interviewing Miss India 1997 in her suburban Bombay apartment (she was then a VJ on MTV India and a bona fide celebrity), I felt uniquely qualified to understand this pageant's proceedings.

Well, I'm still trying to figure it out.

Organized as a fund-raiser, the pageant drew participants from 17 states to compete for the crown of Miss India International (not the same as Miss India or Miss India Worldwide, apparently). The actual beauty contest, however, was quite secondary to the sheer pageantry of the entertainment that preceded it. After being ushered to my seat, a spectacle unfolded before me that could only be described as impressive.

Whether it was dance-school students lip-synching to numbers from Bollywood films like "Asoka" (sadly, there was no re-enactment of one of the shootouts from "Sholay"), full-on music-video choreography accompanying a Talvin Singh remix of a Najma track or a showcase by some straight-up Bollywood B-boys (yes, there was breakdancing) it was quite a musical affair. And though Nusrat Fateh Ali Khan might have done a grave-turn if he saw what was going on while one of his songs was playing, it was incredibly entertaining.

But little could have prepared me for what I consider to be the evening's highlight. As a man emerged from side-stage banging on a dhol (a two-headed drum), a performance began that was truly inspired. Avtar (the dhol player) wasn't playing any regular instrument. No, the bass side of his dhol just happened to be equipped with a flashing strobe, so he had his own portable light show. And, as his playing grew faster and more frenetic, with the lights coming more furiously, the curtains behind him parted to reveal ... acrobats from Splendid China! Spinning plates! On sticks!

Needless to say, this was not what I was expecting.

Thankfully, intermission soon came and I was able to catch my breath before the beauty contest got into full swing. With a cast of judges that inexplicably included Ranier Munns (of the Bogin, Munns & Munns law firm), the contestants were graded neither on swimwear nor on talent.

No, the 39 girls up for the crown were being judged for two main things: ability to beautifully wear beautiful clothes (both "Indian" and "Western") and ability to answer queries from the judges. Questions like "What do you think your best attribute is?" (best answer: "My smile") or "If you could have everyone in this room give to one charitable cause, what would it be?" (best answer: "Education," which I didn't realize was a charity). Most responded admirably, but it was certainly the first category that provided the judges the most to work with. And, given the stunning beauty of the contestants, it probably also proved the most difficult to decide upon.

In the end, it was Nasheyn Lally who won. But the pageant was less about her than it was about celebrating the mad, modern diversity that is Indian culture in Orlando. And though this was only one of many Indo-centric events that happen in town, it certainly turned out to be one of the year's best. 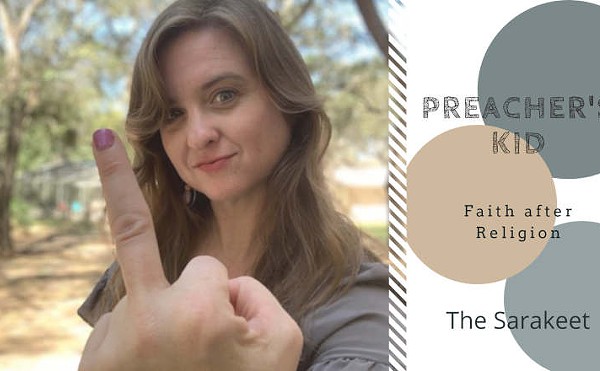