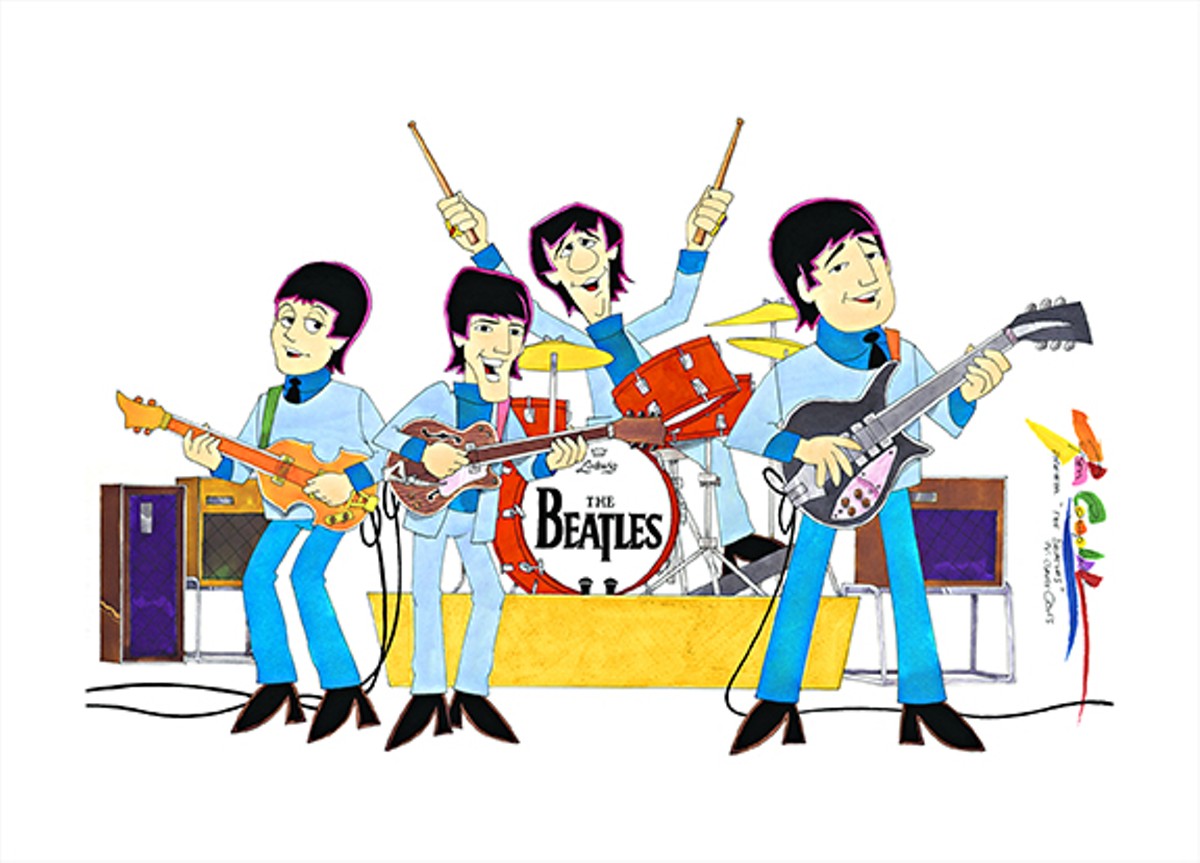 Fifty years ago, Ron Campbell got an offer he couldn't refuse. The first thing he did was refuse it.

Campbell was kicking around his native Australia working as an animator on television commercials and cartoons when a call came in from New York asking him to direct a TV show about beetles. Campbell thought a moment and said, "I don't think bugs will make very good characters."

Of course, he had misheard. The show wasn't about beetles. It was about Beatles.

Looking back on that fateful call, Campbell – who will make live drawings at the 1059 Sunny FM Rock Art Show & Sale Friday through Sunday, as well as display work for sale – isn't sure how he hadn't heard of the Beatles. After all, by 1965 they were the most famous band on the planet. They had just released the Help film and soundtrack and would soon drop Rubber Soul on a still-reeling world.

"I wasn't familiar with their music, but I became a Beatles fan by directing the show," Campbell says. "Directing the Beatles TV cartoon show was not so much exciting as terrifying. It was very challenging. I was a very young man, 24 years old. I had dumped on me a great deal of responsibility to hire a lot of people, to oversee the workflow, to see that six months hence the film would be delivered to New York, and one week after that, another film delivered. It was kind of like flying an airplane. It was very exciting, but you might be scared if you stopped and thought about it. There was too much to do. Not thinking for a moment that 50 years later I would be talking to a newspaper man from Orlando."

The Beatles cartoon changed Campbell's life. It reigned atop the ratings for its entire four-year run, after which Campbell got the nod from Bill Hanna of Hanna-Barbera fame. Soon he was animating The Smurfs, Scooby-Doo, The Jetsons and The Flintstones, among others, and in 1968, he was welcomed back into the Beatles fold to animate the Yellow Submarine feature film.

"Yellow Submarine was a lot more fun," Campbell says. "They sent a voice track and it was my job to send them back pencil drawings of the full animation of the scenes, which included many scenes of the Blue Meanies, the Nowhere Man, a lot of the character animation."

Now retired, Campbell spends his time traveling to events like the Sunny FM show, where he meets fans and draws their favorite characters, starting with pencil and ink outlines and then filling them in with watercolors.

"I do drawings for little children, really," he says. "If I do a drawing for an adult, I find quickly a line of 30 people. Nostalgia is a powerful emotion, I guess."

After half a century animating some of the most iconic characters in television history, Campbell says he still enjoys drawing them, although he can't pick a favorite.

"You can't do it," he says. "How the hell do you choose between the Beatles, Smurfette and Scooby-Doo?"

Luckily, his fans do the picking for him, whether from one of the famous '60s cartoons or from his more recent work on shows like Rugrats and Darkwing Duck.

"I can walk into a room filled with people of all ages, and they all know my work," he says.