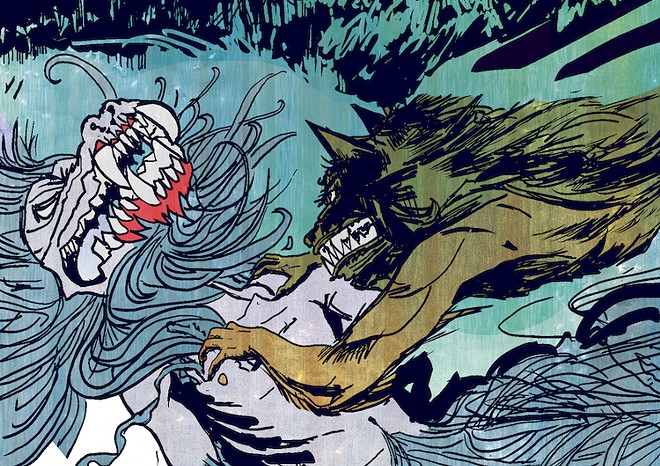 Earlier this month, Marvel and Disney+ premiered a new film showcasing one of the comics company’s more unlikely antiheroes, Werewolf by Night. The pulpy black-and-white film, starring Gael García Bernal, was both an homage to the classic Universal Monster films from decades back and an update of the 1970s character first brought to vivid life on the comics page by Gerry Conway and Mike Ploog.

In a surprise move to coincide with the film’s release, Marvel out of nowhere dropped a new, free Werewolf by Night story as part of their Infinity line of “scrollable” webtoon-style comics, available through the Marvel Unlimited app and intended expressly for viewing on a smartphone.

Even better, the creative minds behind this story were a dream team. The artwork came courtesy of British artist Alison Sampson, well-known from titles like Kick-Ass and Hellboy, and the story came from the fevered brain of Orlando-based horror maestro Owl Goingback.

The stand-alone story, with Sampson’s fluid, expressive art interpreting Goingback’s plot, fits this new format well. Instead of the usual page-panel structure of physical comics, Goingback’s and Sampson’s Werewolf story is a continuous, flowing vertical scroll unfurling in front of your eyes. Panels and action sequences melt effortlessly into one another, bursting out of the confines of a typical comics panel.

“It really is a beautiful concept and I think it’s going to be a huge shift,” says Goingback. “When I first brought it up on my phone. I was like, ‘Oh my god, this is beautiful.’ It just flows on a phone screen.”

Goingback’s Werewolf by Night tale features not OG Werewolf Jack Russell, but newer lycanthrope Jake Gomez — a Hopi youth who inherited the werewolf curse, created by Taboo of the Black-Eyed Peas (!) for Marvel a few years back. “I want to do my own story, but I wanted to acknowledge and honor everything [Taboo] had done with the character,” says Goingback, who is himself a Native American.

And since you can’t have a proper Marvel comic without a hero facing off against a supervillain, Goingback’s Werewolf goes toe-to-toe with a reimagining of longtime Marvel villain the Wendigo. Goingback’s take on the Wendigo is based on the true tale of the Cree Native American Swift Runner, who killed and ate his family in the late 1800s, claiming to be under the spell of the Wendigo.

When Marvel, well aware of Goingback’s stature in the horror lit realm, first approached him about working together, there was only one character on his mind.
“The first thing I wanted to do was Werewolf by Night. That’s what got me into reading comics. I fell in love with Issue One of Werewolf by Night back in 1972. It was the first comic I ever bought,” remembers Goingback. “And they were excited because they had relaunched the Werewolf by Night as a Native American character, so that worked out perfectly.”

The surprise, seasonally appropriate drop of his Werewolf by Night story received roundly positive responses and Goingback hopes this will be the beginning of more work on the feral hero.

“I’m hoping they’ll let us run with the character and do some more stories. I’ve already got ideas for a continuing story, and I could bring in a lot of Native American folklore,” says Goingback.


“The first thing I wanted to do was Werewolf by Night. That’s what got me into reading comics,” remembers Goingback. “And Marvel were excited because they had relaunched the Werewolf as a Native American character, so that worked out perfectly.”

Pressing Goingback for his memories of first seeing the Werewolf comic on the shelves reveals a deep affection for the cult-fave character, who debuted during a strange time in Marvel Comics when monsters like Dracula and Simon Garth’s Zombie were running rampant on the comics page. Werewolf by Night fought Moon Knight early on and would eventually even team up with the likes of Spider-Man and Ghost Rider.

“Mike Ploog’s artwork was fantastic on Werewolf by Night,” he says. “It just jumped out at me and that was it. I was a big horror fan already. I was reading Famous Monsters of Filmland since the age of 9 and my favorite monster of all time was the Wolf-Man, as played by Lon Chaney, Jr.”

Sadly, this same Werewolf by Night series would also be the end of Goingback’s childhood love for comics, when the second part of a two-part story was snatched up from the local Rexall before he could get his hands on it. “I was furious. I was so mad that I just stopped reading comics,” recalls Goingback with a chuckle.

There is, then, a delicious irony in Goingback’s Werewolf launching as a smartphone-friendly web-comic, removing the very barrier to access that derailed his youthful comic book addiction — and exposing him to a completely new audience at the same time. “I didn’t expect any of this. The praise was really surprising,” marvels Goingback. “Here I am with a popular comic book!” 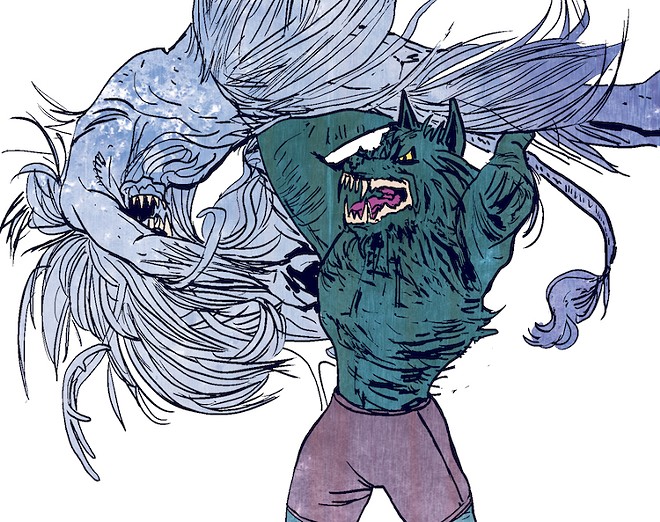 But for now, Goingback is content to let his take on Werewolf by Night sit on virtual shelves for a bit. After all, he’s got to get ready for Halloween. (He loves to hand out candy to local trick-or-treaters.) Speaking of, we couldn’t resist asking Goingback for his recommendations for spooky seasonal reads. He’s happy to oblige.

“You’ve got to read Ray Bradbury’s The Halloween Tree, that’s a must this time of year. A lot of horror writers will reread that book every year; it’s a perfect Halloween story. Cemetery Dance did an anthology called October Dreams. It’s an amazing collection of Halloween stories. And not only are the authors presenting stories, but they are talking about their favorite Halloween memories. So it is a perfect book for the season.”

“And anything I’ve written,” laughs Goingback. “I’ll be vain! … My first novel, Crota, was just a good old-fashioned monster romp. There’s a book that just came out, an anthology called Classic Monsters Unleashed … I did a story that features Dracula in the Old West going up against Sitting Bull and Buffalo Bill Cody. Perfect for the season.”

The Marvel Unlimited app can be purchased through Marvel Comics.