At the risk of sounding cliched: The Force is strong with this one. 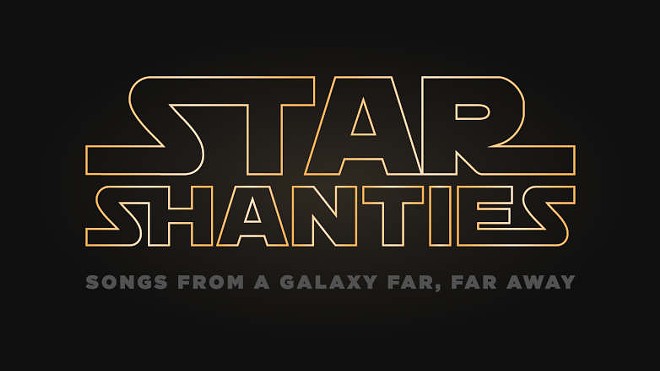 The ragtag crew of the “Wretched Hive” has just survived a pirate attack while on a shady interstellar shipping run on the Outer Rim. Desperate for galactic credits to repair their vessel, they accept the undignified assignment of entertaining inhabitants of the Or-Lan-Do system (located on the Fringe of known space) with their time-honored work songs about the Kessel Run, Hondo Onaka and other obscure icons from that galaxy far, far away.

Back in the prehistoric days before MegaCon and social media, science fiction-obsessed fans celebrated their geekdom at gatherings by “filking,” or singing traditional-sounding folk songs with original lyrics about Hobbits or Spock. Star Shanties may not explicitly use the word filk to describe their Star Wars-inspired songs, but they clearly fall into that noble nerd tradition with this funny, full-throated delight for Jedi masters and nerf-herders alike.

Writer-director Arthur Rowan (known on the RenFaire circuit as Rowan the Bard) teamed up with Ashley Willsey (producer of 2014’s Fringe hit Bloody Bloody Andrew Jackson) for this minimalist yet slickly produced production, which features costumes that would be perfect for Disney-bounding on Batuu and cargo-crate props that look like they could have been jettisoned from the Millennium Falcon’s smuggling hold. The idea for this show may have started as a spoof but this talented quintet takes their singing very seriously, and a tender ode to Alderaan’s explosion nearly brought a tear to my eye.

This show is best enjoyed by those invested enough in George Lucas’s universe to know Princess Leia’s mother’s name (spoiler: It’s Breha) and appreciate jabs at the Galactic Starcruiser’s pricing structure. And the brief but witty book linking the musical numbers brims with fourth wall-breaking meta jokes, while simultaneously doing more to develop its characters’ personalities than Episodes VII though IX put together did. But you don’t have to know Lekkus from Lothal to enjoy the lusty a cappella harmonies and primal hand-drummed percussion.

If there’s a flaw, it’s that (like many real folk songs) the tunes tend to go on for one or two verses longer than necessary, but at under 45 minutes this saga certainly doesn’t outlast its welcome. With all due respect to the other spacefarers out there, this might be my favorite saga-inspired Fringe show since Charlie Ross’ One Man Trilogy. At the risk of sounding cliched: The Force is strong with this one.

Tickets and show info: Star Shanties: Songs From a Galaxy Far, Far Away