The Bard's take on James Cameron 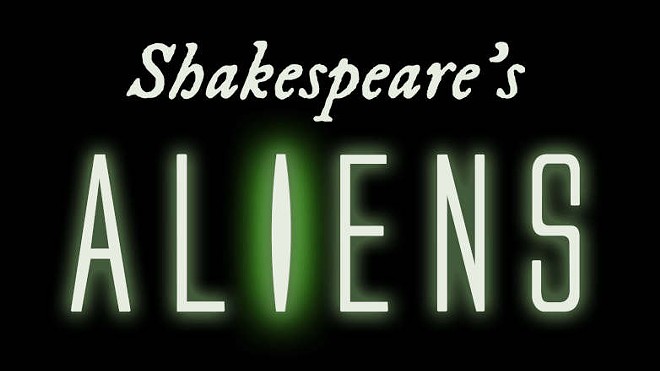 Chuck Dent officiously narrates the tale of Ellen Ripley (Lynn Adams), sole survivor of the Spaceship Nostromo, as she returns to LV-426 on a Colonial Marines rescue mission. As her band of brothers (and sisters) are butchered by egg-spawned “demons,” Ripley and her adopted daughter Newt (Katherine Riley) struggle to survive and escape.

I’m a big fan of the unique niche Hardly Working has carved out for themselves, but Shakespeare’s Aliens is one of their less satisfying efforts, and my quibbles start with the casting. Playwright David Strauss is wonderfully weasely as the conniving corporate cutthroat Carter Burke, and Rob Del Medico’s howling Hudson provides much needed comic relief. But Damany Riley’s Hicks has little chemistry with Adams’s Ripley, whose hard-to-hear head voice simply can’t capture Sigourney Weaver’s husky heroism.

Director John Reid Adams’s staging of several moments only makes sense if you already know the movie well, and other sequences seem unnecessarily slow. Unlike their earlier productions, which firmly reframed their contemporary plots into antique setting, Aliens’ aesthetics feature an anachronistic confusion of futuristic firepower and ancient armor. Much effort was obviously invested in the elaborate DIY costumes and creatures (created by Wendy Cox and Alan Ostrander) but the results are a mixed bag: the imposing Alien queen is missing its signature head frill, but Ripley’s PVC pipe Power Loader is pretty darn nifty.

This show would definitely land in the lower half of this troupe’s half-dozen deep oeuvre if it weren’t for the adrenaline-fueled action scenes choreographed by Bill Warriner, which let slip the dogs of war with chest-bursting puppets, ear-bursting sound effects, and the most immersive employment of The Abbey’s moving lights I’ve seen all festival. Although I didn’t find it nearly as engaging and imaginative as last year’s gender-bent Tarantino tribute, science fiction fans who know their Xenomorphs from ‘Zounds will want to catch this one before “this game hath ended.”