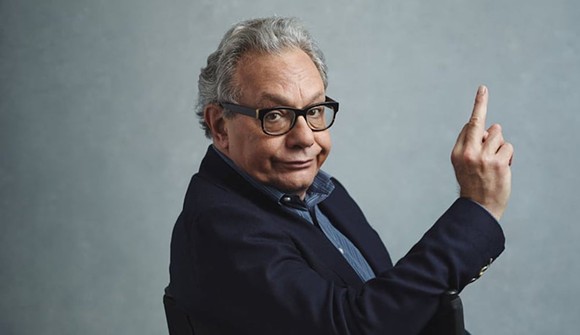 Photo via Gametime
Furious funnyman Lewis Black returns to Orlando this week for a stop on his "It Gets Better Every Day" tour.

That's what Black wants, after all, and why he hollers and rants and gesticulates – he cares. It's the sight of other people who clearly do not give a fuck that sends him over the hilarious edge.

"Rick Scott ... unbelievable. Some of this stuff is unbelievable. You just go 'wow,'" says Black, describing Scott's cries of fraud during his 2018 U.S. Senate race, without any evidence. "You know? 'Wow.'"

Black notes that politicians like Scott and Florida's other U.S. Senator, Marco Rubio, do so many boneheaded things – especially while Trump does incredibly dangerous things – that it's hard to worry so much about the lesser players who won't stand up to Trump.

"There are no adults in the room," Black says of the way Trump's administration has rolled over, along with the rest of the GOP. "And you could be an adult in the room."

Black has a lot to say about Trump, and he says people always chastise him in person for constantly harping on the president, but he also says Trump takes up only three to five minutes of his act. For as long as he's toured, says the 71-year-old comedian, he's only talked about the president for a handful of minutes during each set.

"Monkeys take care better of each other, in terms of a health care system, then we do."

He's always been annoyed with the sitting president in one way or another, and Black says they all have their legacy-undoing hitch. Bush: "I'm gonna go to war." Clinton" "What's the definition of 'is'?" Obama: "Giving out hope like it's Sunday."

"Don't tell me I haven't been mean to every one of them," Black says.

Trump does stand out in one major way, though. "He whines," Black says. "It's really wrong. I've never seen a president whine, ever."

Then he moves on to other topics, like ways we could care for each other more.

"Monkeys take care better of each other, in terms of a health care system, than we do."

Aside from giving good rant, Black says he also likes to receive. At the end of each show, including the one in Orlando, he asks the audience what they want to yell about. And he live-streams that portion on his website.