Legoland shared that they plan to bring boat rides back to the gardens' canals, an attraction that ran on the site from the late '30s until the park shuttered in the aughts.

Opening in 1936 at the current site of Legoland, Cypress Gardens helped make Florida a tourist destination. Throughout the next forty years, it hosted numerous film productions and celebrities and welcomed millions of visitors.

By the 1980s, attendance was lacking, and Florida’s interstates meant the attraction was now well out of the way for many tourists. From 1985 through the mid-1990s, the park was part of the SeaWorld family, allowing it to be the little sibling of Busch Gardens and SeaWorld Orlando.

After Busch Entertainment sold the park in 1995, it struggled to stay relevant. The park closed for good in 2003. At this time, the State, the Trust for Public Land, and Polk County agreed to jointly purchase the gardens in an effort to preserve them. The park reopened in 2007 as a short-lived amusement park focusing on thrill rides and a water park. By the end of 2009, the park was again closed with its future in question. That changed the following year when Merlin announced the deal with the state to open Legoland Florida on the site. Part of the agreement required Legoland to maintain the historic gardens. The park also brought back the water ski show.

Before opening Legoland Florida, Merlin had to redevelop large swaths of the park. However, it saved many of the former attractions, including a custom-built wooden roller coaster, an observation ride, and a suspended family coaster. Image via Legoland Florida
The famed Florida Pool filled with LEGOs in a promotional photo shared when the pool was first restored and reopened. Two of the Southern Belle LEGO sculptures flank the pool.

Merlin spent the next few years beefing up its offerings at the family resort by adding new lands, updating shows, and opening multiple on-site hotels. They reopened a long-closed Oriental Gardens segment of the gardens in 2014, giving the public their first views of the fully restored Florida Pool in many years. They also installed heaters near the Banyan Tree, planted in the gardens in 1939, to ensure it can comfortably survive freezing temperatures the region occasionally sees during the coldest parts of the year. 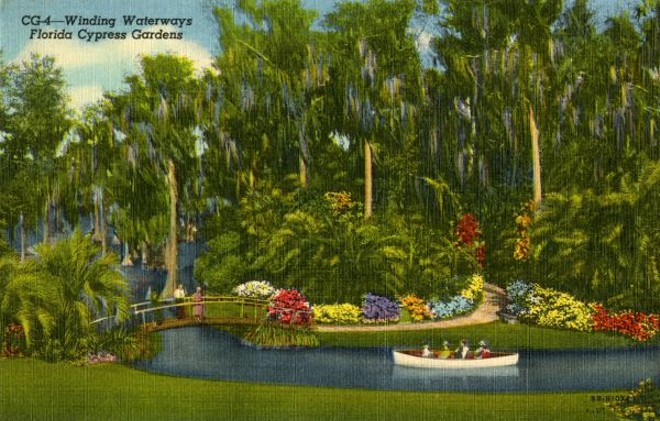 Still, even with these improvements, there was growing criticism that Merlin was more focused on new attractions and not the historic gardens that helped cement Florida as a tourist destination. In 2018, a review by Polk County staff found the gardens were maintained “at a minimal level.” The canals had been slowly taken over by vegetation. Last week, Legoland again renewed its commitment to honoring the historic site. In a new walk-thru museum just inside the park’s entrance, guests can learn about both the history of LEGO and that of Cypress Gardens. An original ride vehicle from Cypress Gardens’ Triple Hurricane roller coaster offers guests a unique photo opportunity. A pair of wooden skis nearby help tell the 85-year history of water skiing that has taken place there. 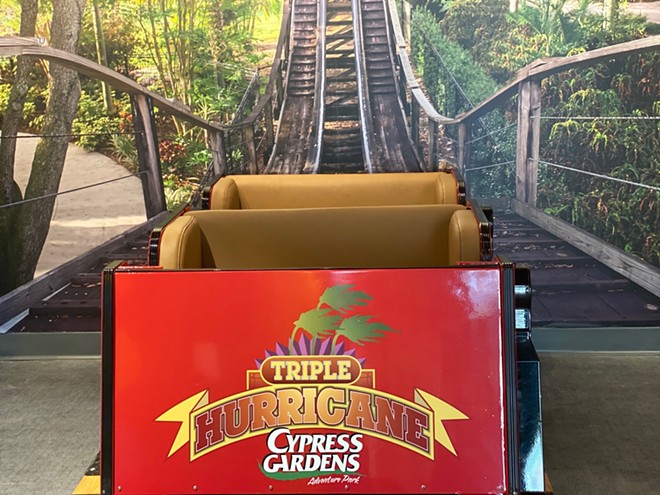 The gardens are also getting a new lease on life, thanks to a group of pirates. After years of speculation, Merlin has confirmed the historic boat tour will return to the gardens starting next year. The Electric Boats opened at Cypress Gardens in 1938, giving guests a relaxing tour of the tropical gardens. Cypress Gardens is the first theme park in Florida, and the Electric Boats were its first true ride. The boats became synonymous with the gardens, even being featured in the first wide-screen feature-length film. The relaxing cruise through the canals was later replicated at other parks, including Disneyland and Busch Gardens Tampa.

By the time Merlin took over the gardens in 2010, the human-made canals that wind through the gardens were covered in duckweed and algae. Things have improved since then, but these canals were often one of the more overlooked aspects of the historic gardens. 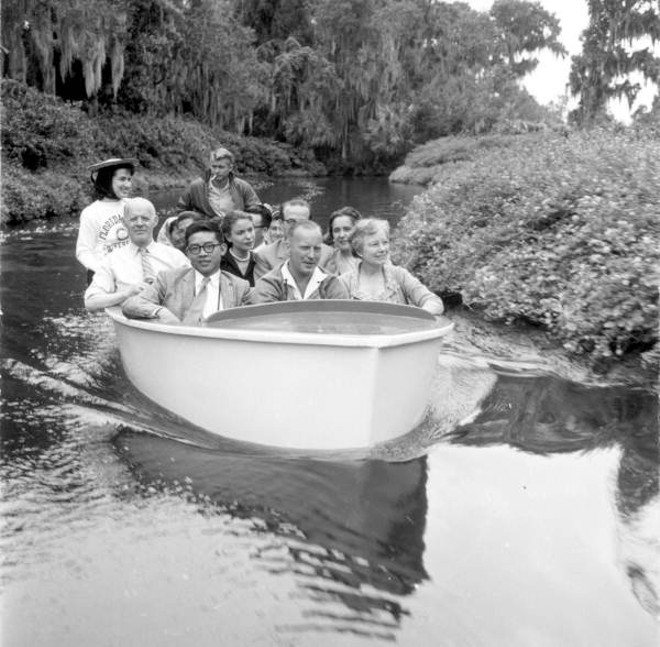 Rex Jackson, managing director for Legoland Parks in North America, announced the boat ride will be returning next year, now with a kid-focused narrative. Guests will “journey through the waters of the legendary Cypress Gardens on a full size, Lego-themed boat as this new epic story unfolds brick by brick in this family-friendly treasure hunt,” according to Jackson. The ride, known as Pirate River Quest, will use the canals through the gardens with guests boarding the boats in the nearby Pirates Cove-themed land. Once onboard, guests will join a crew of LEGO pirates trying to retrieve a treasure stolen by a troop of mischievous monkeys.

Previously, Merlin has tried to keep the gardens and the Legoland-themed attractions mostly separate. They did add a handful of historically appropriate LEGO sculptures to the gardens but otherwise have kept the gardens solely as a walk-thru attraction. Those sculptures in the gardens, of Southern Belles, have received criticism more recently, as the nation grapples with its racist history. For Merlin, the gardens have seemed to be an afterthought with the focus mostly on expanding its ride lineup and chasing after the latest hot LEGO franchise.

That has meant the historic gardens, tucked away in the corner of the Legoland park, were often overlooked by many guests. The return of the boats will help introduce the gardens in a way many haven’t had the pleasure of experiencing. It should also help bring back some of the kinetic energy that made the gardens so special.

No date for the Pirate River Quest has been given, but the park has its annual PirateFest Weekends planned for select dates in January.
click to enlarge