Rumors of Indiana Jones heading to Animal Kingdom date back to even before the park opened, more than twenty years ago. Last fall, the rumors got louder as Disney looked to rebound from the failure that is Rivers of Light.

The less than popular nighttime lagoon show showed how little Disney actually had in the 10-year pipeline for the park. The Avatar-themed Pandora area helped the park see 15.3 percent growth last year, according to the latest industry numbers (though Disney rarely confirms the reports), making it the second most visited theme park in Orlando. But with only two rides and the land based on a nearly forgotten film franchise, rumors point to Disney looking to quickly add something new to the park in the coming years as crowds flood the park.

By this spring the Indiana Jones rumors were being confirmed by multiple insiders with details slowly leaking out. At the time there were still questions on whether Disney would be using the Indiana Jones franchise for a new attraction in Animal Kingdom or at Hollywood Studios. The Hollywood Studios rumor involved the Shanghai Pirates of the Caribbean technology that seamlessly merges screens and physical sets for the trackless boat ride.

New details are now being shared by numerous industry insiders with nearly all of them agreeing that Indiana Jones will be headed to Kingdom. The Dinosaur attraction in Dinoland has almost the exact same layout and uses the same ride vehicles, with slightly different theming, as the Indiana Jones ride that’s found at Disneyland in California and at Tokyo DisneySea. This had many expecting the updated Animal Kingdom ride to be a replica of those two attractions, but while the ride path is nearly many of the rooms on the ride are very different.

On the WDW Magic Forums user Disneyhead'71, who reinvigorated the Indiana Jones rumors earlier this year, confirmed that the Animal Kingdom Indiana Jones ride will feature a fully original story. They also confirmed that the storyline might include dinosaurs, helping tie the ride into the Dinoland area where it’ll be located. Another user that's known for their decent track record with leaks stated that the budget for the new ride would be shared between Orlando and Disneyland Paris, where an Indiana Jones coaster already exists. How Indiana Jones and dinosaurs will co-exist in the new attraction has yet to be revealed.

Disneyhead’71 also reiterated his earlier rumors of other updates heading to Dinoland, possibly including a non-Indiana Jones themed ride using the Shanghai Pirates technology, though that rumor is still being questioned by other insiders who say the ride system may instead be used for a new attraction at either Epcot or Hollywood Studios. Image via Jambo Everyone
This early concept art for Dinoland shows the proposed wooden coaster in the background.
One of the more exciting aspects of the Dinoland update is a rumored new coaster for the land. Originally a wooden coaster known as "The Excavator" was planned for Dinoland. Mentions of it date back to 1993, five years before the theme park when Disney included a description of the coaster in a marketing study for the park. As construction costs soared, Disney leadership quickly began canceling numerous projects in the works for Kingdom, including the coaster and the Beastly Kingdom area where Pandora is now located.

Many of those canceled plans were later realized at Universal’s Islands of Adventure after Universal hired some of the former Imagineers who had been working on the Animal Kingdom projects. One of the ideas that Universal looked at was a dinosaur themed roller coaster for the Jurassic Park area, but that plan never materialized. Now with Jurassic World bringing the Jurassic Park franchise back to the big screen rumors point to Universal reviving that old coaster plan with Gravity Group and Rocky Mountain Construction leading the list of potential coaster design companies. 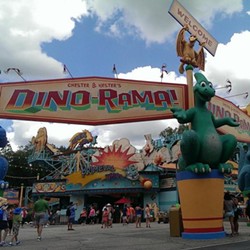 Image via Markydeedrop | Twitter
Dino-Rama at Disney's Animal Kingdom
It now looks like Disney may be looking to build their own dinosaur-themed wooden coaster, possibly as a way to compete against the one rumored for Universal’s Islands of Adventure. Current rumors have the new coaster replacing the carnival-themed Dino-Rama area. That area was a later addition to the park, opening in after guests complained about the lack of rides in the animal heavy theme park. It includes two off-the-shelf rides with some heavy theming and carnival games, something that no other Walt Disney World theme park features. The area is themed to a roadside attraction with 'trash' used to decorate the area. Over the years Disney has attempted to make it more Disney like with various special events, the latest featuring Donald Duck and other Disney ducks in a dance party like atmosphere.

Other rumored additions to Dinoland include an Indiana Jones-themed bar, likely drawing heavily upon the Jock Lindsey one located at Disney Springs, and a new restaurant. The Indiana Jones updates should begin in late 2019, just after their announcement at the D23 Expo that August. This would follow a similar pattern as other recent rides, including the announcement and construction timeline for The Great Movie Ride’s conversion into Mickey & Minnie's Runaway Railway. That timeline places the opening around the same time as the fifth installment in the film series hits theaters in July 2020.

Hopefully, by then we can understand how Indiana Jones and dinosaurs fit together.