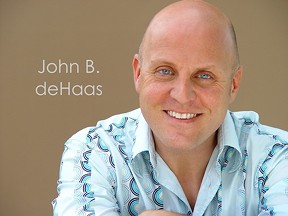 The Orlando Museum of Art has finally fully embraced the Fringe this year, opening their auditorium up as the festival’s Gold venue. Between the newly installed color-changing LED lights and comfy padded seats with excellent sightlines, this could become one of the best performance spaces at the Fringe, provided they can work out some sound system snafus.

So it’s appropriate that the first Fringe show to preview in this gem of a venue is John B. DeHaas’ delicately crafted song cycle "Just This Once." DeHaas has been one of Orlando’s most in-demand pianists and prolific composers for nearly two decades, but this piece dates to his days as Williamsburg, Virginia, theme park employee.

Originally written for his 30th birthday, DeHaas has revived the work for his 50th, and most of it still feels surprisingly relevant (if endearingly naive) 20 years later. Unlike some of DeHaas’ other creations, this song cycle is not a fully formed musical, but a plotless series of loosely related numbers, with little movement and zero dialogue to connect them. Characters go unnamed, existing only for the length of a song, but a common theme of longing for love links the vignettes together. DeHaas’ Broadway pastiche melodies always seem oddly familiar, as if you’ve always known the tune, and if the lyrics aren’t as trickily witty as some of his later work, they a bear straightforward simplicity befitting the show’s tone of insecure optimism.

The cast of "Just This Once" is directed by local favorite Andrea Canny, and includes some of the area’s most talented singers inside (or outside) a theme park: Kevin Kelly, Kelley McGillicuddy, Paul Padilla, Shawn Walsh, Stephanie Warner and Susan Williams. Each gets a solo or two (mostly midtempo power ballads about unrequited love) in which to shine, though my favorites were the comic combos – a barbershop ode to washboard abs, Padilla and Walsh whining about the worst dates they ever had, or Williams and Warner despairing at the deficit of suitable straight men. A few bits, like a twee lullaby with a trio of mothers-to-be, come across as overly precious, but the bulk are quite charming. The cycle’s best moments come during the full-cast opener and finale; when this entire ensemble joins their beautiful voices, the blend is something you’ll want to hear more than just once.