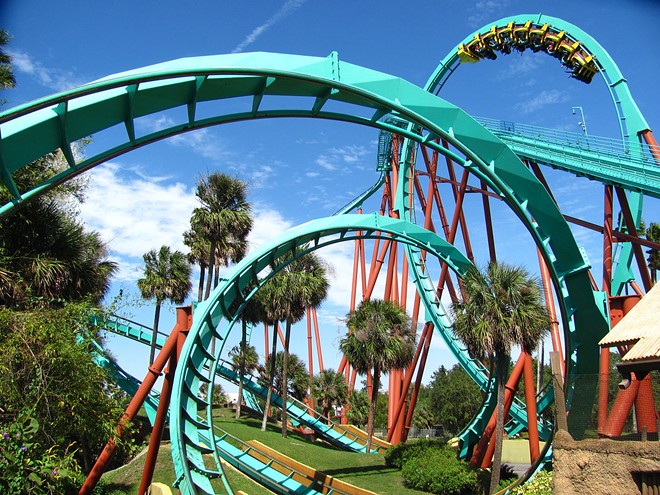 Image via Jeremy Thompson | Wikimedia
Kumba at Busch Gardens Tampa
After a two-year delay, Busch Gardens Tampa was finally able to open their highly anticipated Iron Gwazi coaster earlier this month. With that project now welcoming guests, the park is looking at its next significant investments.

In late 2019, public documents showed the park was moving forward with an update to the long-dormant Rhino Rally area. The ambitious off-road adventure only lasted a few seasons due to constant issues with various ride systems. Since its closure in 2014, the site has sat untouched. Permits filed just prior to the pandemic showed the park planning to use much of the existing queue and entrance plaza for a new flat ride. 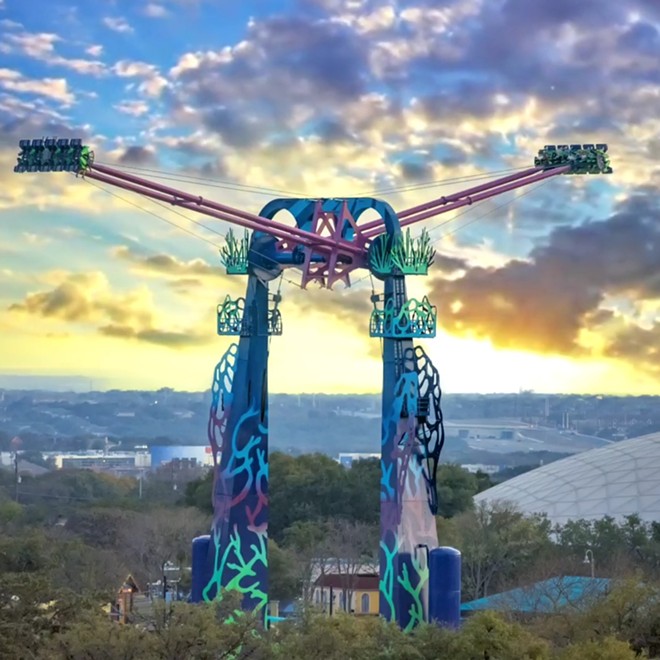 Image via SeaWorld Parks
The 105-foot tall Tidal Surge, SeaWorld San Antonio's new Screamin' Swing attraction
The layout of the load area is similar to the Screamin’ Swing attractions SeaWorld has installed at SeaWorld San Antonio and Busch Gardens Williamsburg. It’s believed this thrill ride will be the next addition to Busch Gardens Tampa and the first major non-coaster addition since the Falcon’s Fury drop tower opened eight years ago. The new attraction, known as Project Jethro, now looks to be slated for 2023, as it requires less build time than the coasters Busch Gardens Tampa has added in recent years. 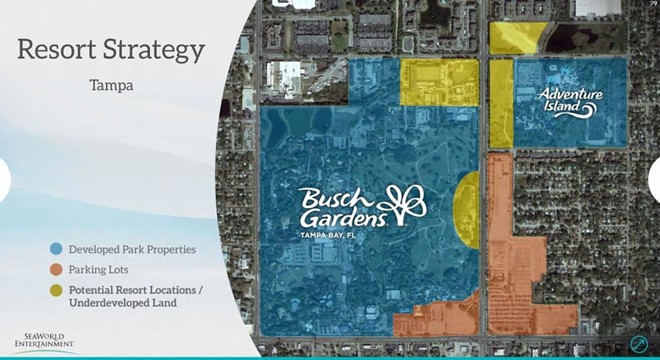 Encouraged by a strong comeback from the pandemic, SeaWorld is now pushing forward with multiple capital-intensive projects. That includes a renewed interest in adding hotels to their parks. Previous plans called for a hotel just across the savanna from the Project Jethro site in Tampa. It’s unclear if these projects will eventually connect.

It’s also noteworthy that two other strongly rumored projects at Tampa park are close to the Project Jethro site. Just across the elephant habitat sits the park’s off-the-shelf wild mouse coaster, Sand Serpent. Previous rumors called for this coaster to have a protective warehouse shell constructed around it. This low-cost solution would allow the coaster to operate while most of the park would be closed during Florida’s afternoon rain showers. It would also help extend the lifespan of the coaster.

On the opposite side of the train tracks from Sand Serpent sits Kumba. While the park already had two coasters, Kumba brought in a new generation of thrills with its massive three-and-a-half-acre footprint. When the sit-down coaster by Swiss design firm Bolliger & Mabillard opened in 1993, it held the title of the world’s tallest vertical loop. With its classic B&M roar, Kumba activated a corner of the park that was previously undeveloped while also solidifying Busch Gardens as Florida’s top thrill park.

That size and age are now why rumors are swirling of its impending demise. First reported by theme site Screamscape, the rumored closure of Kumba quickly filled coaster fan message boards. Busch Gardens Tampa, which typically doesn’t respond to rumors, tweeted a cryptic message that included a video of the coaster with a note that “Hear this roar? It’s not going anywhere.” The park also replied to a tweet by Screamscape stating, “PLOT TWIST—the doc pulled the wrong patient files. Kumba’s not going anywhere, but we still definitely recommend riding it ASAP.”

This then led Lance Hart at Screamscape to make the unprecedented move of publishing the actual email he received with details of the planned closure of the coaster. While Busch Gardens has remained steadfast in its insistence that Kumba will remain, it seems likely that the coaster will need significant work or be closed in the coming years.

Unlike many parks, Florida’s theme parks remain open year-round. That, along with the state’s extreme weather, forces many attractions to have shorter lifespans than they would typically see in other markets. At Islands of Adventure, B&M’s Incredible Hulk coaster was fully rebuilt a few years back. That coaster opened six years after Kumba. In the U.K., another B&M coaster, Nemesis, which opened the year after Kumba, is expected to receive a similar complete rebuild in the coming years.

According to the email posted by Hart, SeaWorld leadership no longer believe Kumba drives ticket sales as much as other attractions at the park. With that in mind, they’ve opted to replace the coaster with new attractions instead of rebuilding it like Universal chose to do with the Hulk. The move wouldn’t come as much of a surprise, as Kumba takes up a large footprint in a section of the park that has seen few improvements in recent years.

When viewed together, the various alleged additions at Busch Gardens represent a wholesale reworking of the back third of the park with likely updates to the inadequate guest flow through this area. It also follows a similar expansion plan as what SeaWorld Orlando saw with the company working clockwise around that park’s central lake. For Busch Gardens Tampa, the updates would energize numerous pockets of the park that currently are underutilized while also helping to address maintenance issues some of these older areas now face.

With marketing for Iron Gwazi still fresh, it’s too early to expect any solid announcements from Busch Gardens regarding their future plans, but as permits begin coming in, we should start to learn what the rest of this decade holds for the Tampa park.