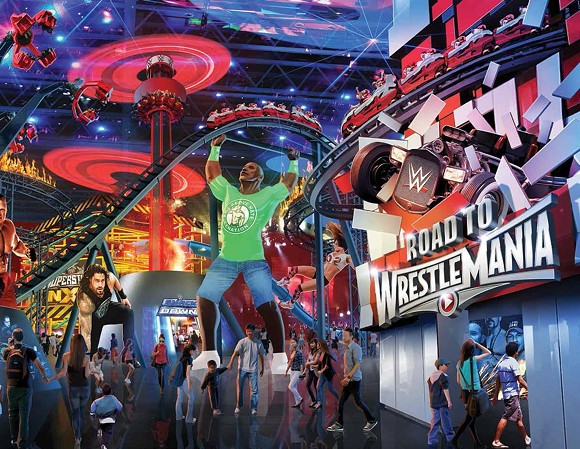 Image via Leisure Opportunities | Forrec
Orlando has long been the rumored home of a future WWE Hall of Fame attraction. Guesses for the location have included nearly every logical place for any type of new attraction from CityWalk to I-Drive to Church Street in downtown.

There’s never been solid evidence that the WWE is interested in a brick-and-mortar Hall of Fame, and even less evidence that such a museum would be built in Central Florida.

But now things are changing.

Recently , an international entertainment design firm known locally for its work on Islands of Adventure’s Port of Entry and The Villages retirement community, released a publication showcasing some of their recent work.

In the industry pamphlet is a multi-page section on "WWE Branded Attractions." Forrec explains that the WWE was “especially conscious of creating authentic experiences that would live up to the high expectations of their extremely discerning fans. They were also looking for scalability so that their branded attractions could be accommodated in a variety of venues.”

Image via Forrec
goes on to explain that the attractions they designed could “accommodated in indoor venues, as well as full-scale outdoor WWE Theme Park sites.”


The attractions are also being designed for a global market. While a full-scale outdoor WWE theme park seems about as likely as Disney World starting a Holy Land Experience-style free day, many of the concepts featured do seem likely in a Hall of Fame-style attraction.

An Andre the Giant-themed fun house and a haunted house, known as the WWE House of Horrors, featuring Undertaker and the Boogeyman, are two of the more classic attractions in the design. A dark ride called Road to Wrestlemania is mentioned, though no details on what the ride would include are shared.

Other traditional theme park rides like a roller coaster, held up by a massive John Cena, a drop tower ride, and other carnival-style flat rides are all featured. A Kuka-arm style ride, similar to Epcot’s former Sum of All Thrills, sits in the middle of a wrestling ring. Various interactive displays, an arcade, and a green screen attraction where guests look to be recreating famous wrestling all fill the concept art.

The concept, while over the top, isn’t that far off from others attempted in the Central Florida market. Disney Quest, an indoor theme park at Disney Springs, featured numerous interactive displays and rides. Over in Daytona Beach, at the Daytona USA experience guests could explore the history and thrill of NASCAR with various films, interactive museum displays, a pit crew team experience, and a tour of the track. That attraction reopened earlier this year as the Motorsports Hall of Fame of America. On July 3 Disney Quest will close for Disney to make way for yet another interactive attraction, this one based on the NBA.

The WWE already has a large Central Florida presence and the newly opened Hogan’s Beach Shop on I-Drive – with its waits stretching over an hour to get in when it first opened – show that the wrestling is still a draw in this market.

There’s no word on when, where or if any of the WWE attractions or theme parks will be developed but here's to hoping it ends up in Orlando.