While Florida has a $1 trillion GDP, nearly half of residents can't afford basic needs

Photo via Shutterstock
A week after it was announced that Florida's Gross Domestic Product is worth $1 trillion, which would make it the 17th largest economy in the world if it were a country, a new study from the United Way shows that the majority of us wouldn't be able to tell.

The acronym ALICE stands for "Asset Limited, Income Constrained, Employed." This report doesn't cover people without jobs, but rather people who have jobs but still can't afford to live, also known as the "working poor."

In other words, nearly half of Florida is considered "working poor" and they make up most of the labor force (bartenders, construction workers, office clerks, and the like). ALICE workers are considered by United Way as our state's most "valuable and vulnerable economic driver."

The deeper you dive into this report, which pulled data from sources like the U.S Census Bureau, the American Community Survey and others, the more the numbers start to make sense. One of the more staggering pieces of data is that 67 percent of the jobs in Florida pay less than $20 an hour, with 75 percent of those paying less than $15 an hour.

Staying above the Household Survival threshold is a major issue for ALICE workers. From 2007 t0 2015, the basic cost of living in Florida rose 19 percent – with wages staying nearly stagnant – while the national rate of inflation rose by just 14 percent.

So if half of nearly half of the state's workforce aren't making enough money for food and shelter, how do we have a $1 trillion GDP?

One thing to consider is that the industries that contribute the most to the state's GDP often have higher-paying jobs but lower employment. For example, according to the United Way the financial industry contributes a huge chunk of the state's GDP, more than $173 billion in 2015 (or 22 percent), but they only employ 2 percent of the population.

Orlando area renters need to earn at least $34,000 to afford a studio apartment


The most common job in Florida is retail, at an average wage of $9.99 an hour, or $19,980 if working full time, year round. This means that even if both parents of a family of four worked full time at a Florida retail job, they would make $14,000 less than what's require to survive.

As Orlando knows, families who also work in the service sector are stressed with other factors besides low wages, like irregular income, inconsistent scheduling and lack of benefits. Not to mention that these jobs are often located in areas with high housing costs, meaning you either have to spend long commutes to get to your job, or pay out of your budget to put a roof over your head. 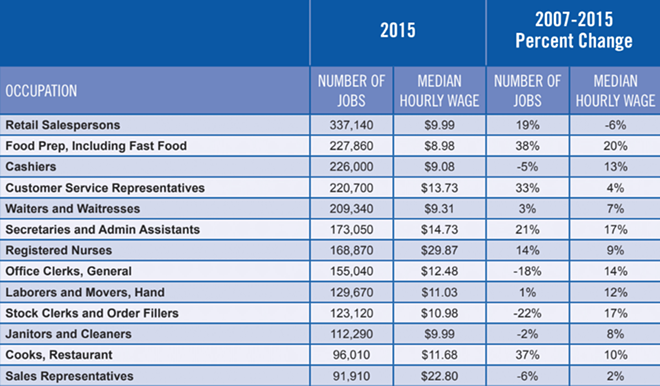 None of this is anything new. Thursday report falls in line with just about every other major study released in the last five years. Last March, a study from the National Low Income Housing Coalition found that the Orlando area ties for second worst in the nation for available affordable housing, while a recent Census survey also stated that the City Beautiful had the third lowest average lowest median household incomes in the country, at $52,385.

Keep this study handy for the next time you hear Gov. Rick Scott bragging about the jobs report.