Photo by Monivette Cordeiro
His friends knew him as Brycen Banks.

That's the nickname Eddie Justice, one of the 49 killed in the mass shooting at the gay nightclub Pulse, created for himself. At a vigil in Lake Eola Park on Monday, survivors of the shooting and friends remembered the 30-year-old accountant with balloons and handwritten notes on paper hearts.

Guardini Bellefleur says his friend was a little bougie — he lived in a high-rise in downtown Orlando, drove a Mercedes and owned a business. Justice also loved Latin Night at Pulse, and his friends would often accompany him.

It was Latin Night when a gunman attacked Pulse nightclub on June 12. Justice was there with his best friend and survivor of the shooting, Demetrice Naulings, and another friend. Naulings told CBS News that during the shooting, Justice told him, "Take care of me. Please don't leave me." 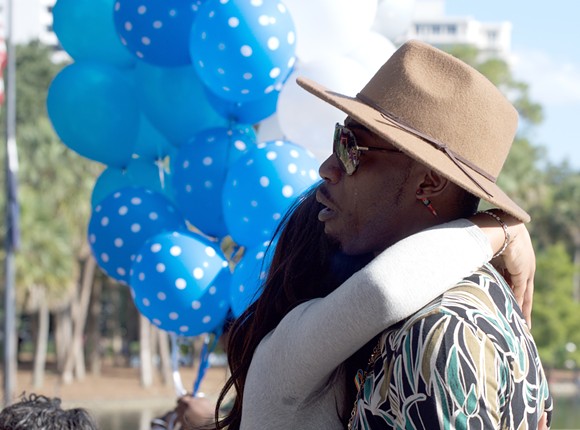 Photo by Monivette Cordeiro
Demetrice Naulings, right
Justice was separated from his friends in the rush to escape the club and was trapped in one of the club's bathrooms. During that time, he texted his mother, saying, "Mommy I love you," and in his final text, calls the gunman in the bathroom with them "a terror." Bellefleur says that while Naulings has been able to talk about Justice publicly, the accountant's other friend, who was trapped in a bathroom but survived the shooting, has not been outside of his home because he's afraid.

Naulings says he doesn't want to dwell on that night but instead wants to celebrate the life of Justice. On Monday, he reminisced over their last good memory together at Naulings' birthday party in May. Naulings dyed Justice's hair blond, and all night, he flaunted his new look.

"We were a battery together," Naulings says. "He was the positive, I was the negative. He made everybody smile around him ... he was my No. 1 fan."

Naulings says he's going to continue talking about Justice even though he's emotionally exhausted because he wants people to know his friend didn't die in vain. 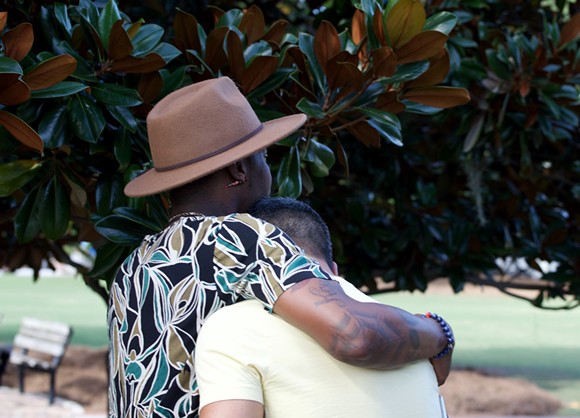 Photo by Monivette Cordeiro
Demetrice Naulings comforts Eddie Justice's boyfriend, Alejandro Ortega.
Alejandro Ortega also got a final text from Justice the night of June 12. Ortega says the last words he got from his boyfriend were, "I love you baby."

Ortega says he met Justice about three months ago, but their time together was special. He knows a little English and Justice knew some Spanish, and when they couldn't understand each other, they used a translation app.

Their last time together was on Saturday night, June 11, hours before the mass shooting. They had gone shopping, and at some point, Justice started talking about them getting married within the next weeks and having kids. Ortega didn't find out Justice was dead until Monday morning.

"Eddie will always be on my mind and in my heart," Ortega says. "I know he wanted to take care of me. Unfortunately, they took away that possibility."

Justice's funeral will be held Saturday at the New Destiny Christian Center in Apopka.