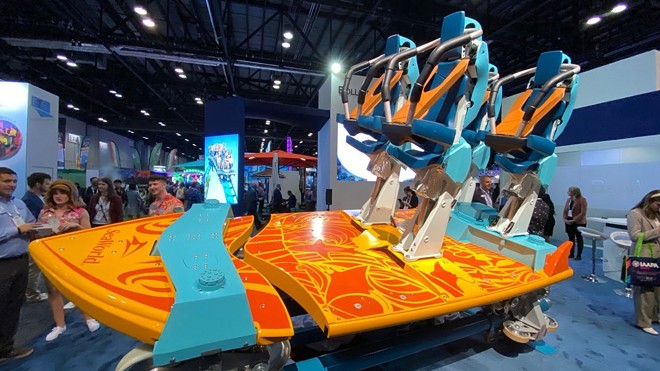 Photo via Spectrum News 13
Pipeline: The Surf Coaster is SeaWorld Orlando's newest upcoming attraction. The standing coaster will reach maximum speeds of 60 mph and a height of 110 ft.

SeaWorld Orlando shared an inside look at their newest attraction, Pipeline: The Surf Coaster, at the annual International Association of Amusement Parks and Attractions Expo this Tuesday.

SeaWorld partnered with B&M Rides to design a unique ride car that looks like a an oversized surfboard. Pipeline is a standing coaster designed for guests to feel as if they're actually shredding gnarly waves and hanging ten on the surf.

“It has decals and elements to it that celebrate surf cultures from every single era,” Jonathan Smith, the vice president of rides and engineering for SeaWorld Parks & Entertainment said. “It’s bright, it’s spectacular … and it’s beautiful.”

“We’ve finished the first element which is the hammerhead wave. We’ve also finished our second element leaving us in the middle of erecting a wave curl inversion as it stands today,” Smith said. “So there is electrical work going on, concrete work, iron work. A little bit of every discipline is on site today as we are installing the ride. It’s a pretty exciting time to be there.”

The coaster is set to open sometime in 2023, becoming SeaWorld Orlando's seventh rollercoaster. The opening of Pipeline follows the opening of Ice Breaker earlier this year.