Post-Hurricane Ian, students who lived in flooded apartments near UCF are still trying to pick up the pieces of their lives 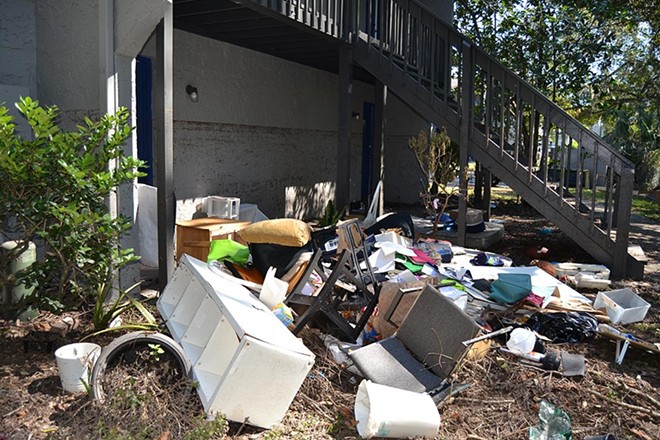 The horror Hurricane Ian has left in its wake surpasses anything you’ll find at Universal Studios on a spooky October night. Well over a week after the storm swept through, people are still picking up the pieces and salvaging what’s left, including students in vulnerable apartments near the University of Central Florida.

Historic flooding was the storm’s main agent of destruction in Orlando. Dramatic shots of Lake Eola show just how much water fell. That was the case in even more dramatic fashion on the eastern edge of the city near UCF. On the morning of Sept. 29, the waters rose quickly in apartments near the university — so quickly, in fact, that the National Guard was called in and airboat rescues were necessary. Once the waters receded, those residents have found their belongings waterlogged and useless, sitting in mold-filled rooms.

At The Place at Alafaya, a large complex across the street from the UCF campus, the lowest-lying apartments were soaked nearly above their doorways. Residents in other parts of the complex saw walls of water rushing their way. Cars submerged during the storm sit lifeless in the parking lot. And the residents themselves — many of them students at UCF or Valencia College — are scrambling to find new places to live.

The floodwaters caught many by surprise. And it has left some residents to wonder why they didn’t receive more warning before the destructive hurricane wreaked havoc on their homes.

In the days leading up to the hurricane, residents say they received messages from The Place, which is owned by the Texas-based company South Oxford Management. One resident, a 19-year-old Valencia student who requested anonymity to avoid potential legal ramifications, described one such letter.

“It just was telling us what a hurricane warning was and that they might not be available for assistance,” the resident, who will be referred to as E, told Orlando Weekly. “And that we should take responsibility for ourselves and our personal property and evacuate if we’re told to.”

Ian made landfall in Southwest Florida on Sept. 28. As the storm made its way north through the night, fears of a high-wind event like Hurricane Charley dissipated. E and her boyfriend woke up to light rain on Sept. 29 and still had power, at least until about 8:30 a.m. Not long after, they saw a column of water heading toward their first-floor apartment.


“I started gathering what I could, getting my pets. My boyfriend was making sure that we would be able to get out and get to our car.” E says that in about 20 or 30 minutes, the water went from covering her feet to waist level, at which point they left. Hours later, she got the official message to evacuate from The Place. “By the time it was 1:15,” she says. “The back of the neighborhood was already severely flooded.”

The most heavily impacted apartments were on Wagon Road, a street completely contained within the sprawling complex and on its southern side. A UCF student who lived on the road — she also wishes to remain anonymous and will be referred to as N — says she’s been a Florida resident for about six years but hadn’t experienced a hurricane like this before.

N hadn’t considered evacuating. But on the night of Sept. 28, water started to trickle under her door. She and her roommate ignored it at first. However, in the early morning when a neighbor knocked on the door and suggested they move their cars, the reality of the situation began to sink in.

Afraid to head out on their own, N called her father to pick them up. While they waited, they tried to move their possessions up from the ground. Her neighbors invited them upstairs to escape the rising waters.

“I opened the front door and just water flooded into my apartment. It was really a struggle to get it closed.”

N says when her father arrived, the water was waist deep and a chaotic scene was taking place outside. In true Florida fashion, she saw a man navigating the flooded parking lot on a surfboard.

“I saw a guy crawling out of his window to get out because his apartment level on Wagon Road was a lot lower than mine,” N says. “It was a really heartbreaking thing to see.”

In the end, N lost nearly all her belongings to water. Even her car, which she’d moved, was submerged.

Evan Edwards, a 24-year-old student at Valencia, was also in his first-floor apartment when the water started rising. “I actually ran out and started helping people carry pets and stuff like that,” Edwards told Orlando Weekly. “But then I realized more water was coming in. I had a little bit of time to pack a go bag. So I was fortunate.”

Still, Edwards left most of his possessions behind. If he counts himself lucky, it’s because of the damage he saw to other buildings. The flooding waters approached from the eastern end of the complex on Wagon Road, which backs up to a field near the Little Econlockhatchee River. The river winds its way through the area — near other apartments like Arden Villas on University Boulevard where, like The Place, the National Guard was called in to help people escape the inundation.

At The Place, a week after the storm, piles of furniture are still stacked on the lawns outside people’s doors. Inside apartments, the stench of mold is overpowering. Dark lines of mulch mark how high the water got. At the building closest to the fence where the waters rushed in, the line nearly reaches the tops of door frames.

Edwards says he made it all the way to that building to check on fellow residents during the storm and fortunately found that everyone on the first floor had gone upstairs. 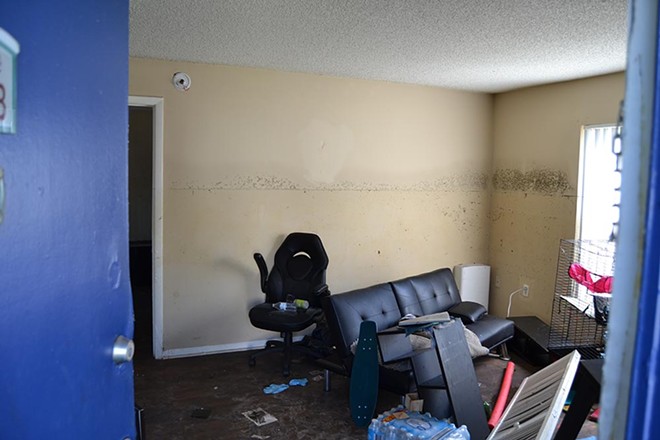 During Hurricane Irma in 2017, The Place experienced flooding, although it was on a much smaller scale than Ian. Yet, for many residents, some of whom only recently learned about the flooding five years ago, it begs the question: Why was the complex not better prepared this time around?

Holly Johnson, vice president of marketing at South Oxford Management, explained in an email exchange with OW that managers sent messages to residents in the days leading up to the hurricane, letting them know that flooding was a possibility and that they should move their vehicles to higher ground.

“We informed residents of the importance of monitoring the County Warning System regarding storm updates and encouraged them to be prepared to follow any potential evacuation orders,” Johnson says. “We experienced unprecedented flooding in previously unflooded areas.”

But even in those areas that had been inundated before, South Oxford Management has no legal obligation to inform residents before they move in about the property’s flood history. That’s because Florida law doesn’t demand it.

Laws that require sellers to disclose a home’s history or risk of flooding have become increasingly common across the country. (Although Florida and 20 other states continue to hold out.) Laws that require landlords to tell renters about flood risks are far less common. Only seven states have this protection for renters, according to an analysis by the think tank Next100. The most recent law passed was in Texas in the wake of heavy flooding from Hurricane Harvey.

Information about the UCF area’s flood risk is available in other ways. The Federal Emergency Management Agency maps these hazards. With its online mapping tool, a search of The Place shows three of its buildings and sections of two others at the end of Wagon Road are in an “AE Flood Zone.” That is, areas with a one percent chance of flooding each year, typically located near floodplains, rivers or lakes. This higher risk zone extends across the small plain near the Little Econ River, which is also the backyard of other apartment complexes in the area like Arden Villas.

Residents at The Place say this knowledge would have been useful to have when they moved in, perhaps prompting them to evacuate sooner. It also would have been important when they chose their renter’s insurance. Many have found theirs doesn’t include flood protection.

Many residents have been left to rely on FEMA assistance. Johnson at South Oxford Management says her company has helped facilitate claims, including appealing denials.

The housing needs are also urgent. “We have partnered with over 30 apartment communities to help relocate displaced residents,” Johnson said in an email. “Some communities have even offered move-in specials to assist residents.”

However, Edwards says he applied for a nearby apartment owned by South Oxford Management and was denied because of his credit score. He’s staying at his girlfriend’s UCF dorm while looking for a new place. Neither N nor E took South Oxford Management up on their offer either, despite the company waiving application fees and offering other discounts. Both are living at their parents’ houses outside Orlando while they sort through the challenges of being recently displaced.

Residents of The Place are now trying to figure out how to forward. Edwards says he has advised people not to sign a non-disclosure agreement (which has been posted on Reddit) sent from South Oxford Management after the hurricane as people move out of the uninhabitable buildings.

Others say they’re talking to attorneys about how to hold The Place accountable, although Florida’s laws on flood risk disclosure will likely make this an uphill battle. Others are simply offering support in a group chat, which has seen membership swell in recent days.

“A lot of people are being really sweet and kind,” N says. “It’s really hopeful to see that a lot of residents who weren’t as negatively impacted, they’re offering places to stay, they’re offering old furniture, they’re offering advice, moral support. That kind of stuff.”
Unfortunately, a remedy likely isn’t coming soon for residents who lost everything in Ian. Some are waiting for FEMA aid. Students are looking for somewhere to live so they can get back to their classes. But even that search is complicated by a booming housing market in the Orlando area that has sent rents skyrocketing in recent years. 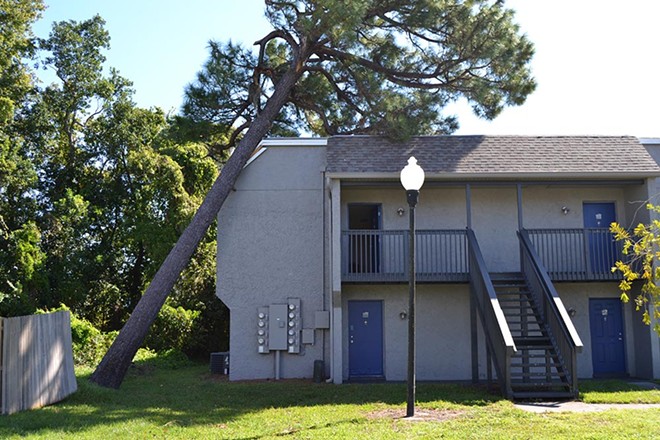 “It’s just a tough situation to be in because it wasn’t our fault and I know the flood itself wasn’t The Place’s fault,” E says. “But I feel like a lot of my stuff would have been salvaged if we would have been warned that it’s a high risk.”

The torrent from Ian truly was unprecedented. ​​National Weather Service rainfall totals from the Union Park area south of UCF measured over 17 inches. And the dramatic rescues that happened in the region, at The Place and elsewhere, underscore the life-threatening situation people found themselves in. Frustration with The Place persists for this reason.

“I know that legally they weren’t obligated to tell us anything,” N says. “But I feel like morally, it would have been nice to at least go to the places that they knew were high risk and warn us.”
Scroll to read more Orlando Area News articles