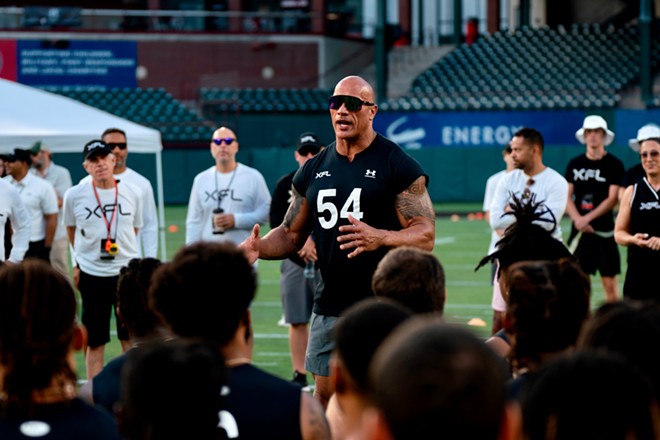 Starting next February, Orlandoans will again have a professional football team to root for.

Dwayne Johnson, famous from his time in wrestling as "The Rock" and his burgeoning acting career, is bringing the XFL football league to the City Beautiful. He co-owns the league with Dany Garcia, having purchased it in 2020. The XFL's previous owner was Johnson's former boss at the WWE, Vince McMahon.

Johnson and Garcia announced during an XFL Townhall that Orlando will join seven other cities participating in this XFL 2.0, as it were. (Or 3.0 if you count the attempted 2020 relaunch derailed by the pandemic.)

Terrell Buckley was named coach of the as-yet-unnamed Orlando team. Buckley was previously a coach at the University of Mississippi. Prior to coaching, Buckley was a credentialed player in his own right as a 14-year NFL veteran and Super Bowl XXXVI champion. "I’m excited to announce that I am the head coach of Orlando’s brand-new XFL Franchise," said Buckley on Twitter. "This city is known for making dreams come true and I can’t wait to help add to that tradition."

The team's home field will be Camping World Stadium, and ESPN will be the XFL's official broadcast partner.

And we'd be remiss if we didn't remind you, because we are a nerdy alt-weekly who hates fun, that Orlando was indeed part of the first iteration of the XFL in 2001 with the Orlando Rage. The team, and the league, lasted for one season before ceasing operations.