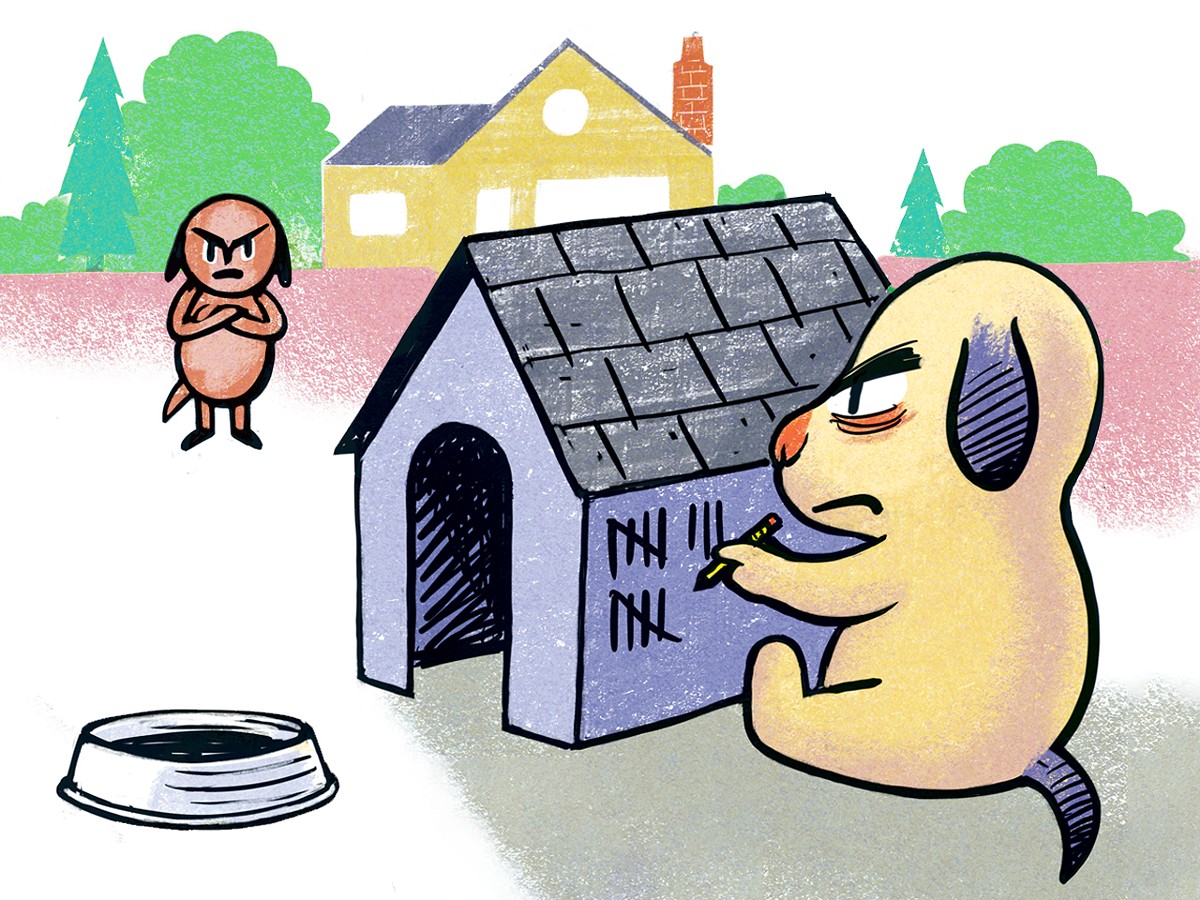 Dear Dan: I'm a 29-year-old straight man. I've been with my 25-year-old partner for six years. I love her and think that we are perfect for each other. We have all the things that make existing with someone wonderful. But about two years into our relationship I had a two-week-long affair while I was out of the country. I fucked up. I came clean to my partner and we've done our best to work through this over the last four years, but it has obviously caused some trust issues between us. I've never cheated it again and I try every day to work through these issues I caused in our relationship.

There's also been two recent instances of me breaking her trust. On a particularly stressful day I was caught sneaking a cigarette — the sneaking part is the issue — and on another occasion I did drugs in our communal back garden with a friend after she had gone to bed. I owned up to both straight away. I view both of these as being a symptom of the lockdown/pandemic prompting me to break with my "normal" behavior. But my partner is no longer comfortable allowing me to have the freedom to go out with my friends and partake in drugs without her express permission, which she already said she's unlikely to grant me. The other element to this is, we want kids in three years. We've agreed that I will fully abstain from all drugs after we become parents.

I want to meet the wants of my partner while also maintaining a degree of autonomy. When we discuss these matters — which we've been doing frequently lately — her argument boils down to this: "You did a bad thing, you need to make concessions so that I feel safe, you having to seek my permission makes me feel safe." It's coming to loggerheads and I don't know if I'm the unreasonable one here, especially since I'm arguing for the freedom to do an illegal drug. I would appreciate your external, outside, drug-positive perspective in this.
— Don't Really Understand Girlfriend's Sentiment

Hi, DRUGS: I had some emergency dental work done this morning and I'm a little strung out on ... what are those things called again? Oh, right: drugs. Last night I selected the letters I wanted to respond to in this week's column and I really didn't expect to be on powerful painkillers when I sat down to write my responses today. In all honesty, I probably shouldn't be operating advice machinery at the moment, but deadlines are deadlines. You should take my advice with a grain silo or two of salt, DRUGS, and everyone else should just skip this week's column entirely.

OK! Here we go! My outside, external, drug-positive-but-with-caveats (see below) perspective on your dilemma boils down to this: Do not make babies with this woman. Don't scramble your DNA together with hers — not unless it makes your dick hard to think about begging this woman for permission every time you wanna smoke a little pot with a friend or take a fucking shit for the next 40 years. (And, trust me, you're still going to want to smoke pot after the babies come.) If that kind of begging excites you, great. Have all the fucking babies. But if that doesn't excite you ... dude ... run the fuck away.

Yeah, yeah: You did a bad thing. You had an affair four years ago and you made the mistake of telling your girlfriend about it even though 1) she most likely was never going to find out about it and 2) you quickly came to regret it. Your regret wasn't instantaneous — but the fact that you haven't cheated on her since is a pretty good indication that your regret was sincere. And now here you are four years later, DRUGS, waking up every day and getting back to work on those trust issues. Because you're still in trouble. Because you made the mistake of telling your girlfriend about an affair she would never have found known about if you had kept your mouth shut.

But you know ... come to think of it ... maybe it was a good thing you that you told your girlfriend about the affair, DRUGS. Not because honesty is always the best policy. The famed couples counselor and author and podcaster and TED Talker Esther Perel urges people who've had affairs to consider the "burden of knowing" before they disclose. If you sincerely regret the affair and it's not going to happen again and your partner is not in any physical risk and is unlikely to hear about the affair from a third party, sparing them the burden of knowing is the second-most loving thing a person can do. (Not cheating at all would, of course, be the most loving thing a person can do.)

So to be clear, DRUGS, I don't think telling your girlfriend was the right thing to do because all affairs must be disclosed. I think telling your particular girlfriend was the right thing to do because she's telling on herself now. If she doesn't feel like she can trust you ever again — and if she's constantly on the lookout for new reasons why she can't trust you — then she needs to end this relationship. But she hasn't ended the relationship, DRUGS, and you need to ask yourself why she hasn't. I have a hunch: She hasn't ended it because she likes it this way.

But it shouldn't. And if she insists it does or that it should, DRUGS, you should leave her.

About those caveats: You don't specify the drug you used in the backyard with your friend but I'm gonna assume it was weed — which is legal where I live but not where you live. There is, of course, a big difference between stepping out to smoke a little pot after the girlfriend has gone to bed and sneaking out to smoke a lotta meth. And if you're an addict and a little pot has led to a lot of harder drugs in the past, your girlfriend's zero tolerance policy might be justified. But if we're not talking about hard drugs and you don't have addiction issues, DRUGS, you shouldn't have to beg your girlfriend's permission in advance — which she's denied in advance — to smoke a little pot with a buddy.

Dear Dan: I've been listening to old episodes of the Savage Lovecast while working from home. Yesterday I heard you explain to straight male listeners that their straight female partners would say "yes" to sex more often if "sex" didn't always mean the woman getting fucked. That really resonated with me, a straight woman with a male partner. When my husband came onto me the next night and I didn't feel like opening up to get basted, instead of saying "no" I offered to jerk him off while he sucked my tits. It was great — for both of us! Total win! Thank you, Dan Savage!
— Joyfully Enjoying Relevant Knowledge

You're welcome, JERK! It's always nice to hear from folks who've taken my advice and didn't regret it!