Mandatory minimum reform dies, but hope remains for one inmate 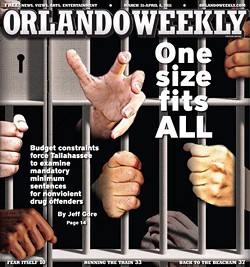 On March 31, we ran a feature detailing a historic push to reform Florida's mandatory minimum drug laws, an effort shared by a diverse cast of characters: a collection of conservatives called “Right on Crime,” the veteran activists of Families Against Mandatory Minimums (FAMM), and a handful of against-the-grain lawmakers in Tallahassee. Under the state’s drug trafficking statute, illegal possession of 20 Vicodin pills means a minimum of 15 years in jail without any plea bargaining, and that's just one example of the many drug penalties that some say are excessively harsh. But at the beginning of this legislative session, a pair of companion bills were filed to remove all language from the state's drug trafficking statute which compel judges to impose minimum prison time for specified drug crimes. As HB 917 sponsor Ari Porth, D-Coral Springs, told the Weekly, such a bill in previous years would not have been thought of, much less proposed – after all, legislators are loathe to appear "soft on crime" -- but due to the recent state budget crunch and the swelling cost of keeping so many people in prison, sentencing reform actually gained some mainstream appeal for the first time in three decades. Well, now that the session is over, how did those bills do? We posed that question via email to a legislative staffer with some intimate knowledge of the process; here was the reply:

We called State Sen. Ellyn Bogdanoff and Rep. Ari Porth (the sponsors of the mandatory minimum reform bills) for an explanation of how the intiative died, but we received no answer. So we turned to FAMM and sure enough, the organization's man in Florida, Greg Newburn, had already penned a legislative recap. Here’s an excerpt:

HB 917 passed several committees, but never made it to the full House for a vote. SB 1334 passed the Criminal Justice Committee 5-0, which included the support of Chairman Greg Evers, thanks in part to your efforts to educate him on this issue. It also passed the Judiciary Committee 5-2. As many of you know, our legislative session is only 60 days, and we simply ran out of time. We were able to place the bill on the Senate “Special Order” Calendar, but budget issues prevented the bill from being heard.

So there you have it. While an initiative that may have greatly reduced the inmate population (and state expenses) was killed, other legislation passed that gave unprecedented inroads to companies that profit from increased incarceration. In other news, Scott Earle, the Massachusetts native currently serving the 12th year of his 25-year sentence in a Sumter county jail on a drug conviction (see the March 31 feature linked above for the full story), wrote to the Weekly earlier this month to announce that Crowell & Moring, a law firm based in Washington D.C., will be representing him in a commutation petition to Gov. Rick Scott. The firm confirmed that it was representing Earle, but would not provide any other details about the case. A source from FAMM with knowledge of Earle’s finances, as well as the firm's reputation, suggested that the case would be handled pro bono.
click to enlarge 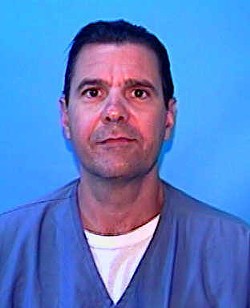 A final note to fellow reporters: if you send something through the mail to an inmate, make sure it has the company letterhead on it, or else the prison will refuse it. Earle said his mother had to read the entire 4,000+ word story out loud through the phone.