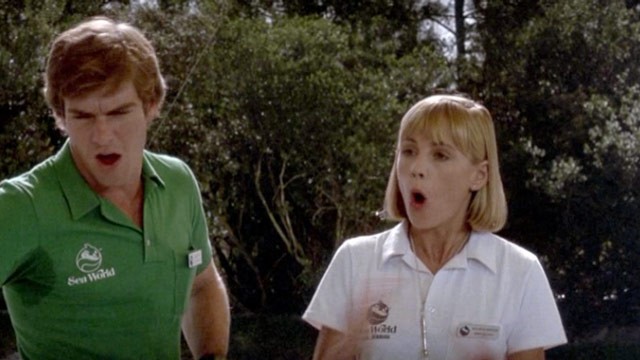 They deleted the subplot where Dennis Quaid searches for an antiperspirant that works.

They deleted the subplot where Dennis Quaid searches for an antiperspirant that works.

Location Matters is a series that reflects upon pieces of Orlando immortalized in popular film.

Our country's most popular chain of corporate-owned aquatic life theme parks has taken a real drubbing in the past year thanks to Blackfish, and the new groundswell against orca captivity has been so

intense it seems plausible we might live to see SeaWorld's extinction. Zooing up anything larger than a great dane seems like a recipe for trouble, certainly, and if these whales could talk they'd probably say, "Enough with the somersaults, I want to go cruise the Atlantic for walrus and krill."

Still, SeaWorld is more than just incarcerated Shamus, and it would be a shame if children lost the chance to touch a starfish and ride a log flume on the same day. Should the hammer comes down let's hope they keep at least a sliver of SeaWorld Orlando open, if not for the kids than as a monument to the lousiest film it ever played a part in: the legendary Jaws 3-D.

On paper, the third Jaws installment looked pretty solid. Killer shark finds its way into marine habitat, terrorizes staff and guests, hunky young Dennis Quaid tries to stop it, tough guy park manager Lou Gossett refuses to believe there's a threat, zealous hunter Simon MacCorkindale thirsts to murder the shark on live TV, and a bikini-clad Lea Thompson is in there for some sex appeal. So what went wrong?

To start with, director Joe Alves had no prior experience at the helm of a film. At the time, Alves was best known for his production design on the first two Jaws films and only took the Jaws 3-D directing job when several other more experienced names declined (including Murray Lerner, he of Oscar-winning doc From Mao to Mozart, who was depressed he was even considered). Joe Alves hasn't directed a feature since, possibly because someone passed legislation against it. There are Arby's training videos with more spark than most passages in Jaws 3-D.

The other fatal flaw was rendering the titular killer as a lifeless blob during the big 3-D climax. After spending the majority of the film giving us bits of real shark footage mixed with acceptable practical effects for a thriller co-starring the guy from "Manimal," Jaws 3-D presents a head-on shot of the clearly immobile and superimposed beast moving through frame as if on invisible string. Amazingly, stupidly, the filmmakers slow this footage down so we can thoroughly drink in the constipation. You have to hand it to Dennis Quaid, though: he really sells the idea that an animated grey turd is threatening his life. No wonder his next turn was in The Right Stuff.

SeaWorld Orlando has been renovated many times over since the July 1983 release of Jaws 3-D, and while the park's $90+ admission fee no longer grants access to their official Jaws 3-D prop exhibit (justified because J3-D opened at number one, enjoying the biggest weekend of the year behind Return of the Jedi) or the Hatfields & McCoys waterskiing show (not making that up; the "plot" involved the famous Tug Fork families a-feudin' over an aquatic pig), you can still visit the underwater tunnel at Shark Encounter as featured in the film. And, of course, SeaWorld still has that massive lagoon where so many a fictional waterskier met their fate. Kelly Ann Bukowski, we hardly knew ye.

Semi-interesting production note: did you know that our planet's largest solar pool heater was custom-designed for Jaws 3-D? So that's where the $20 million budget went. It sure didn't go to that crap attack shark.