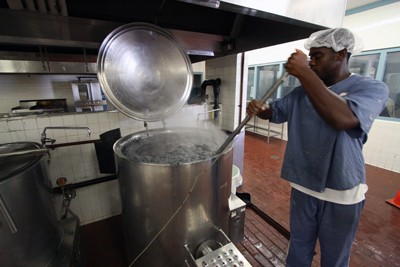 Photo via Florida Department of Corrections
Florida prisoners are planning to go on strike on Martin Luther King Jr. Day to protest unpaid labor and brutal conditions in the state's prison system.

State prisoners performed 3.15 million hours of work in 2017 valued at more than $38 million with state and local agencies, which includes construction, landscaping and cleaning up after natural disasters, like Hurricane Irma.
The average hourly wage for a Florida inmate who is shuttered off to work outside the prison is between 20 cents and 55 cents, according to the Prison Policy Initiative. For inmates who worked inside the prison as janitors, laundry attendants or cooks, hourly wages are much lower – in some cases, they get paid nothing at all. Florida prisons are disproportionately filled with black people, and the history of "convict leasing" in the state has long been associated as a "method undertaken by Southern state to replace the economic setup of slavery" after the end of the Civil War, according to The New Tropic.

Organizers of Operation PUSH say prisoners in at least eight facilities across Florida plan to stop working on Monday, Jan. 15 and stay down for 30 days or more until the Florida Department of Corrections addresses their concerns. The strike's main goals include "payment for our labor, rather than the current slave arrangement," ending expensive canteen prices that are inaccessible to prisoners and reintroducing parole as an incentive. Prisoners say a a case of soup that costs $4 at any grocery store costs inmates $17 inside state facilities. Organizers also seek to end overcrowding, acts of brutality from corrections officers, toxic environmental conditions, state executions and the loss of voting rights for convicted inmates. Prisoners have received help from various organizations around the state, including the Campaign to Fight Toxic Prisons and Incarcerated Workers Organizing Committee.

"Our goal is to make the governor realize that it will cost the state of Florida millions of dollars daily to contract outside companies to come and cook, clean, and handle the maintenance," anonymous incarcerated people said in a statement released by organizers. "This will cause a total break down. In order to become very effective we must use everything we have to show that we mean business. This is our chance to establish unity and solidarity. … A voice locked up is not a voice unheard!"

Florida's penal system has been under scrutiny for a number of issues over the last few years, especially by the Miami Herald. The newspaper's investigations have revealed widespread reports of brutal beatings and rape at juvenile detention centers, the story of an inmate who was gassed to death and the cruel report of a mentally disabled man who was fatally burned after being locked in a scalding shower.

"The way to strike back is not with violence as this is what they want," Operation PUSH organizers said in a statement. "If we show them violence they will have a legitimate excuse to use brute force against us and explain to the public that they had to use brute force in order to contain the situation. However, their weakness is their wallet."

In These Times reports DOC officials say the agency "will continue to ensure the safe operation of our correctional institutions" when asked to comment about the strike.