Fight over automatic tipping at Florida restaurants moves ahead 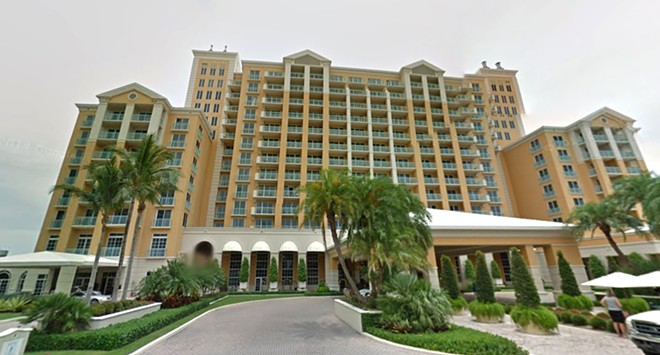 Screenshot via Google Maps
A federal appeals court Tuesday cleared the way for a class-action lawsuit alleging that restaurants at Ritz-Carlton hotels in Florida did not give proper notice before tacking on automatic tips to diners’ bills.

The ruling by a three-judge panel of the 11th U.S. Circuit Court of Appeals overturned major parts of a district judge’s decision to dismiss the lawsuit, filed by a New York resident who saw 18 percent gratuities added to his bills at three Ritz-Carlton restaurants in Key Biscayne.

The plaintiff, Michael Fox, contended that one bill did not mention an automatic tip was being added, while two others said “suggested” 18 percent gratuities would be added – though the bills included the tip amounts. He filed the class-action lawsuit on behalf of diners who paid such gratuities at Ritz-Carlton restaurants throughout the state and alleged, in part, that the hotel company violated a law known as the Florida Deceptive and Unfair Trade Practices Act, according to Tuesday’s ruling.

The suit alleged that Ritz-Carlton used the same practices at 49 restaurants across the state over a four-year period.

In dismissing the case, the district judge found that Fox did not have legal standing to sue on behalf of diners at restaurants that he did not visit and that his claims did not meet a $5 million threshold for class-action lawsuits. The district judge also dismissed a claim for a sales-tax refund, finding that Fox had not properly gone through an administrative process.

But the three-judge panel Tuesday overturned the parts of the ruling dealing with legal standing and the $5 million threshold and sent the case back to the lower court.

The ruling said Fox alleged that Ritz-Carlton used the same practices at 49 restaurants across the state over a four-year period and that potential class members were affected in the same way.

“Fox and the class members have suffered the same economic injury from Ritz-Carlton’s gratuity and sales tax practices across its properties in Florida,” said the 22-page ruling, written by Judge Robert Luck and joined by Judges Ed Carnes and Stanley Marcus. “While those injuries may have occurred on different days at different restaurants, those facts do not change what injuries Fox alleged those class members suffered.”

“Even though class members may have overpaid only some percentage of the total bill each time they ate at the hotel’s Florida restaurants, added up over hundreds of thousands of customers across four years at 10 Ritz-Carlton hotels and 49 restaurants, we do not need to suspend reality to conclude that the overpayment was more than $5 million,” the ruling said.

The panel, however, agreed with the district judge’s dismissal of Fox’s claim for a sales-tax refund because of a failure to “exhaust his administrative remedies.”