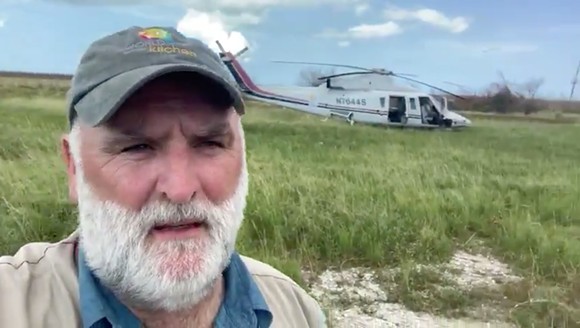 How did they do it? With preparation, help from partnering companies, and a conveniently located commercial kitchen.

Using one of his own kitchens at Atlantis Bahamas in Nassau, Andrés and crew started by making "José’s signature ham and cheese sandwich" as a starter dish. Resort guests soon began volunteering alongside the chefs and kitchen teams.


First #ChefsForBahamas food run of the day on the way! Today we @WCKitchen will reach 100,000 meals served! This is true community effort...only possible because of support of you & partners here on the ground... @atlantisbahamas @opmthebahamas @CarnivalCruise @BlankFoundation pic.twitter.com/nxmUYTG4dA

"It's a true community effort, there's no other way to do it," said Andrés in a video posted to Twitter on Monday. "We were able to be here well before the hurricane arrived. We were so proud to be the first ones on the ground."

The organization has been working with the Office of the Prime Minister of the Bahamas and Carnival Cruise lines, among others, to supply ingredients and transportation.


Scenes from the day: From our kitchen in Nassau led by Chef Karla to serving families at Abaco airport to paella in Freeport. Today we delivered over 20,000 meals thanks to your support of our #ChefsForBahamas relief efforts. 🇧🇸 pic.twitter.com/RlffR9YplS

Andrés formed the organization following the 2010 Haiti earthquake, with a mission to provide healthy food to people affected by disasters. World Central Kitchen has prepared meals in the Dominican Republic, Nicaragua, Zambia, Peru, Cuba, Uganda and Cambodia, but the Bahamian mission is personal for Andrés, whose restaurant, Fish by José Andrés, is located at the Cove Atlantis on Paradise Island.


Despite the setbacks, challenges, frustrations of helicopters, running out of ingredients...this is what matters: our @WCKitchen team delivering meals tonight to St Francis shelter on Abaco. The kids came to help bring inside & generator gave light as we served!! #ChefsForBahamas pic.twitter.com/dS38u8SNRY

Andrés, previously an author and cooking-show star, began culinary school at age 15 and later honed his craft at molecular-gastronomy landmark El Bulli in Catalonia, Spain, where he spent three years creating dishes that pushed the boundaries of art and physics. That same level of meticulous culinary execution is now put to use serving the Bahamas.


Meet some of our amazing volunteers at our kitchen in The Bahamas! @WCKitchen Relief Team is preparing food that we will bring to Abaco & Grand Bahama tomorrow! We’ve been working non-stop to coordinate planes, boats and even a helicopter... #ChefsForBahamas pic.twitter.com/MLhLW2gB5x

Donations to World Central Kitchen can be made online, and the group plans to continue posting needs and calls for support throughout their relief efforts.