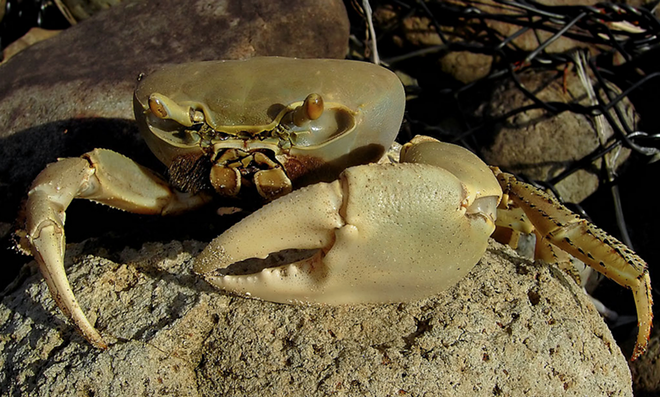 Photo via Wikipedia
It's breeding season for giant land crabs, which means for the next couple weeks, crabs the size Nerf footballs will rise from their burrows and lurk in the forests of Central Florida.

"They're very active in the late summer and early fall," said Nichole Perna of the U.S. Fish and Wildlife Service" to WESH. "This is when they're going to be breeding and then migrating to the ocean to release their spawn into the water."

Giant land crabs, or blue crabs, are mostly active this time of year and can reach a circumference of over a foot and a half in length and weigh in at over 18 ounces.

Though slightly intimidating, the crabs aren't much of a threat to humans (other than a strong pinch) and come in a variety of color shades.

If you're into massive crab cakes, these bulky crustaceans are OK to eat. However, it is illegal to remove a giant land crab from a protected sanctuary.

These crabs can be found at night and in shady areas during the day.