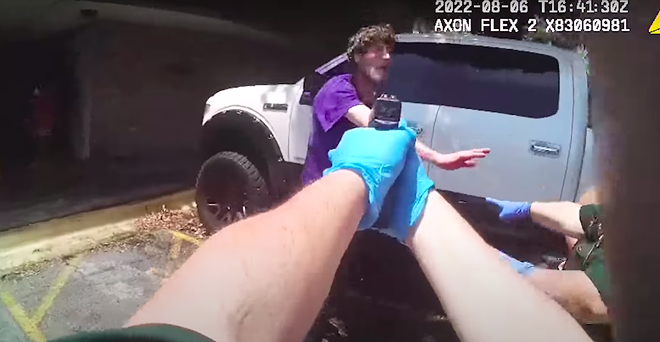 The Orange County Sheriff's Office has released bodycam footage of one of their deputies killing a man in parking lot of the Heritage Hotel on S Orange Blossom Trail.

Cops were called to the scene at midday on August 6 after shots had been fired between two men. When they arrived, they found 21-year-old Dylan Michael Jimenez suffering from a gunshot wound on the ground. A bystander was helping to treat Jimenez and identified himself as a paramedic before describing his injuries.

Orange County Sheriff deputy fatally shooting a man point blank after the man handed over his gun to the deputy’s partner. #Florida pic.twitter.com/MHmKYZGp7s


Jimenez's brother, 28-year-old Bryan Matthew Richardson, was standing nearby holding a handgun that was pointed at the ground. When bystanders alerted the deputies to Richardson's gun, two deputies ran toward him. He extended his arm out to create space between himself and one OCSO deputy while keeping the gun pointed out the ground. The deputies yelled at him to drop the weapon. The video shows Richardson's gun being taken by an OCSO deputy.

Immediately after he is unarmed, the deputy whose bodycam footage was shared by OCSO fired his weapon eight times at Richardson from mere feet away. Two seconds elapsed between Richardson being told to drop the gun and the shooting.

Both Richardson and his brother later died of their injuries. A third man involved in the altercation with the brothers was shot but survived. The deputy who killed Richardson was placed on paid temporary administrative leave, according to a statement released with the body camera footage by OCSO Sheriff John Mina.