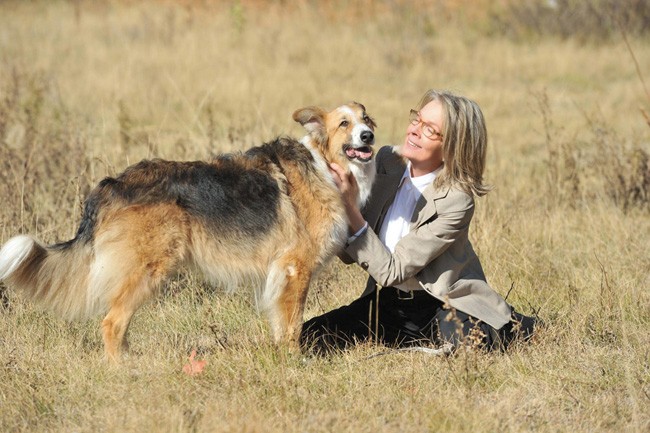 Oh, man. Man, oh, man. As a product of classic 1980s cinema, it's not easy to put down writer-director Lawrence Kasdan, the mind behind two pieces of the Star Wars holy trinity as well as Raiders of the Lost Ark, Silverado, The Big Chill and Body Heat, but Darling Companion is Kasdan's third horrific film in his last three, spanning the past 12 years. He hasn't written anything (that's been produced, at least) since 2003's dreadful Dreamcatcher. Darling Companion, co-written with wife Meg Kasdan, doesn't even involve a shit weasel, and it's less tolerable than that one.

Diane Keaton stars as Beth, a (what else?) shrill and manic menopausal housewife who can't stand her doctor husband Joseph (Kevin Kline), and crosses her fingers when her unmarried daughter (Elisabeth Moss) meets a cute, young veterinarian (Jay Ali) after mother and daughter find an abandoned dog by the freeway and name it Freeway. The kids are instantly married at a ceremony at her parents' lavish vacation home in the Colorado Rockies and then jet off, leaving the bunch – which now includes their doctor nephew (Mark Duplass), Jeff's sister (Dianne Wiest), the sister's boyfriend (Richard Jenkins) and a self-proclaimed psychic gypsy (Ayelet Zurer). Oh, and Freeway, of course.

On a walk, Freeway bolts into the mountains in pursuit of a deer. Relish this moment: It will be the only action that doesn't involve fly fishing, kidney stones, displaced shoulders and bad cell phone service. Whoa, Nelly! That's some lesson-learning adventure!

If I sound bitter, it's because Kasdan mistakenly thinks anyone besides your grandparents (elderly grandparents) wants to sit through 103 minutes of aging boomers looking for a dog. Besides a few treacly, surface-level observations about life as an AARP magazine recipient and a poorly rendered, left-field animated dream sequence, the only event worth mentioning is the search and rescue party. Will these wealthy, self-involved asshats recover their daughter's object of affection that we saw her grow attached to for all of five minutes before she clung desperately to the first man with a mutual fund and pearly white teeth? Mr. Kasdan, I respect you, but I could give two shits, and you've taken three.