Shine on, you crazy diamond

The latest iteration of this eclectic neighborhood eatery is a jewel 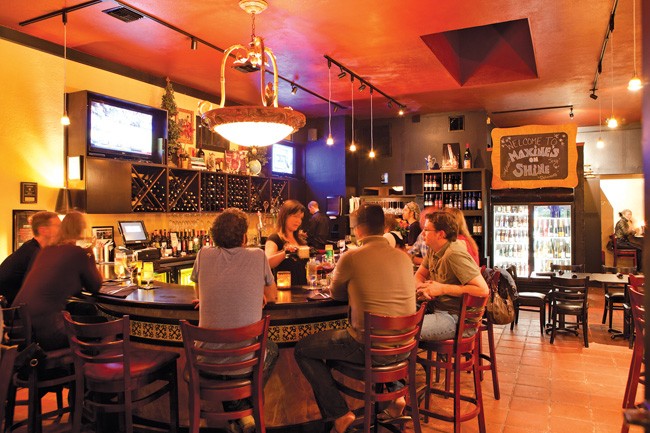 Count Maxine’s as my new fave neighborhood restaurant. Granted, I don’t actually live in the neighborhood – in fact, I live a good half-hour away – but in our ever-shrinking global village of a world Maxine’s, most assuredly, is in my extended neighborhood.

Any neighborhood would be privileged to have a Maxine’s in its backyard, but in this case it’s Colonialtown I’m left to envy. The room drew praise in its days as Bravissimo Italian Café, then, after a much-needed buffing-up, reopened as Shine Neighborhood Kitchen, and shine it did. The expanded kitchen and an interior reconfiguration made the intimate space even more welcoming, and now that owners Kirt Earhart and wife Shelly “Maxine” Broadwell have added their personal touches and a new name, 337 N. Shine Ave.’s 65-year objective has finally been actualized.

By personal touches, I mean leopard and zebra striping; I allude to an ample, studied wine list with nearly 30 varieties available by the glass; I point to a grope-friendly “Stiletto Room” in the back (a room where Kirt and Maxine plan to renew their vows). There are paintings by local artists, a cheery conviviality and, oddly enough, there’s Bret Ashman.

If the name sounds familiar, that’s because it’s the same Bret Ashman of Social Chameleon/Milk Bar/Spooky’s Black Cat Café fame. Ashman has partnered with Earhart to run the kitchen at Maxine’s. I’ve sampled Ashman’s competently executed, albeit lighter, fare at the aforementioned establishments, but the curry-crusted corvina ($23) I ate on my visit was the last thing I expected the Milkman to deliver. This mild, flaky fish couldn’t have been prepared any better – it was lightly singed, crested with asparagus and enveloped in a light sauce flavored with red peppers, shallots and black beans. Honestly, I didn’t know Ashman had it in him. And though he takes artistic license with his gnocchi con pollo alla Sorrentina ($14), the doughy knuckles mixed with chunks of chicken, peas, Parmesan and prosciutto in a pinot grigio butter sauce were so properly rendered, we hardly missed the customary basil, mozzarella and San Marzano tomato sauce.

Ashman brings his signature stuffed grape leaves ($6), formerly served at the Social Chameleon, to Maxine’s with nary a difference in quality, right down to the curry yogurt and house-made tzatziki. (Note: Ashman plans to reopen Social Chameleon in the space once occupied by El Coqui on the corner of Bumby Avenue and Washington Street.) A smoked onion mince gave his contemporary take on traditional Caprese salad ($9) an intriguing smack.

Intriguing is also the way I’d describe the approach Ashman and Earhart are taking with their menu’s pan-Mediterranean flavor profile. The pair promises to introduce Indian, Asian and Latin accents and steer the menu in a slightly more eclectic direction. That said, desserts like tiramisu ($6) and toasted almond cake ($5) stick within the current profile and do so splendidly, even if not baked in-house.

Like its predecessor, Maxine’s will continue to offer a brunch service with Ashman’s reasonably priced and, yes, intriguing lineup that’s sure to win over an even wider audience. Our server won us over with his accommodating and effusive demeanor – qualities both Earhart and Ashman exude and work to instill. If this all sounds a bit hyperbolic, forgive me. But in the case of Maxine’s on Shine, nothing short of a glowing review is deserved.