Glenfiddich scotch flight
Typically in our monthly Another Round nightlife column, we traverse different Orlando neighborhoods in search of lively watering holes and tasty cocktails. But in this rendition of Another Round, my husband and I hit up the globally inspired marketplaces at the annual Epcot International Food & Wine Fest. While they might not be considered actual “pubs,” our Disney crawl landed us with plenty of refreshing concoctions.

New to this year’s Food & Wine Fest, the Scotland marketplace immediately peaked our interest and kicked off our afternoon drinking adventure with a bang. What else would you expect from a Glenfiddich scotch flight? Especially being that this one included three types of scotch – 12, 15 and 18 years.

Now, I wouldn’t say scotch is the most refreshing of liquors to sip on during a hot-as-heck Orlando afternoon, and that’s exactly why we booked it to the Canada marketplace for a glass of chilled La Face Neige apple ice wine (for me) and an ice-cold Moosehead lager (for him).

After cooling down a bit, we meandered our way through a few nearby marketplaces and landed at another new Food & Wine Fest resident, the Florida Local marketplace. Among the Cigar City brews and Florida seafood on the menu, we opted to try the Florida Orange Groves Key Limen wine, which offered a tart-yet-sweet nod to our home state. 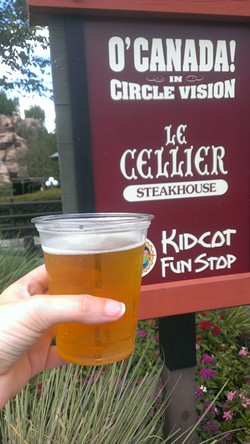 As the afternoon wore on, the fiery temps pushed on as well. That’s why we hopped to the Brewer’s Collection marketplace and, with Schöfferhofer Grapefruit beer in hand, we relaxed for a few minutes in a shady spot of the adjacent biergarten.

With all that walking, we decided to curb our hunger by downing kimchi dogs at the Korean marketplace and then stopped by the China marketplace for Mongolian beef and a Happy Lychee cocktail (which included a delightful mixture of vodka and tequila).

Staying on the Asian kick, my husband made his way to the Singapore marketplace in search of a Singapore Sling. While ordering, the server warned it was “the strongest cocktail in the park,” and also noted that many patrons returned the drink after claiming it was too stiff. Having enjoyed the Sling during a previous Food & Wine Fest visit, we bit the bullet and thoroughly enjoyed the flavorful mixture of Hendrick’s gin and cherry herring liqueur. 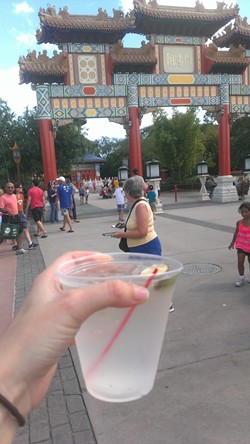 A few stops were made to nosh on Argentinian beef skewers and Brazilian seared scallops, and then we passed by the Greece marketplace for a tug of Ouza by Metaxa. Admittedly, it was our first time sipping the spirit, and the licorice flavor reminded me of something along the lines of absinthe. When in Europe, right?

Speaking of Europe, we decided to end our afternoon at, what some might say, is the liveliest marketplace in all of Epcot – France. Not only did the Parisian-inspired pavilion offer comedic street performers, but this marketplace also served up festive drinks like my Eiffel Sour Cosmo Slush (a bright red mixture of vodka, Grey Goose Cherry Noir, Grand Marnier and cranberry juice served in a pretty martini glass). After my husband finished the last of his Kronenbourg Blanc beer and my brain freeze wore off, we said “Au revoir” to Epcot.

For those thirsty for more photos of our journey around the Epcot International Food & Wine Fest, check out the entire photo gallery (which also includes photos of the delicious food we ate that day).

The fest runs through Nov. 25, and if you can cough up the admission ticket price to Epcot (around $90 per person), be sure and map out your day (and budget) by visiting the park’s website to see marketplace menus and pricing.

Not up for dishing out that much cash? For a less expensive option, you could always head out on your own food and wine adventure by visiting these local Orlando restaurants, all of which offer delectable world cuisines.