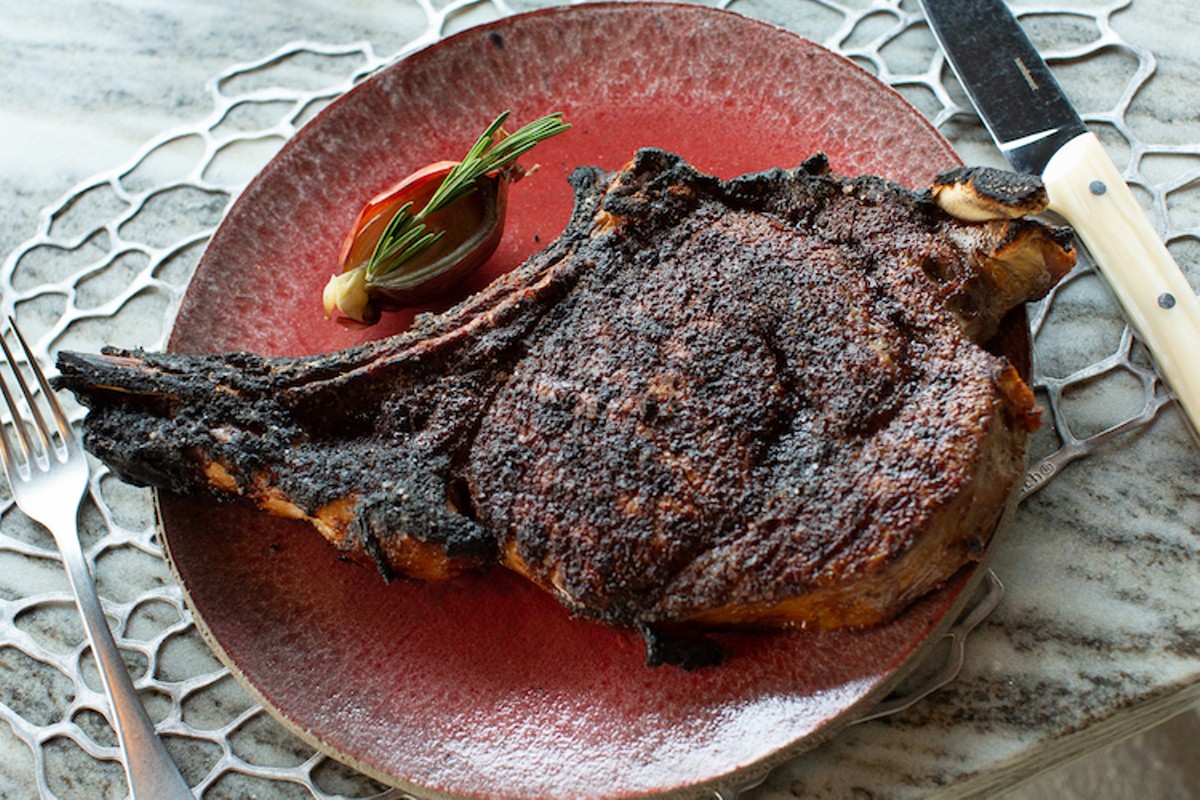 It's hard to bugger up cooking a steak at home. Just procure a beautiful cut of USDA Prime beef and Maillard reaction the hell out of it with a proper reverse-sear. Personally, I finish mine off in a blazing-hot, cast-iron pan on my outdoor grill to maintain a smoke-free and breathable kitchen. Plate it with a starch and some vegetables and, ta-da! Eat your heart out, Peter Luger. But to willfully venture to a steakhouse and pay a premium for a steak I can cook at home — at times, often better than the cuts seared and broiled at such stodgy bores of bovinity like Ruth's Chris, Capital Grille and Morton's — is pointless.

There are exceptions: The throwback posh and startling wine list at Bern's comes to mind, as does Capa's sexy slabs and Spanish silhouette. But none are more notable than Knife & Spoon, the Ritz-Carlton newcomer whose eminence is rooted in chef John Tesar's prized proteins. You'll recognize Tesar, the four-time James Beard Award nominee, from his appearances on Top Chef seasons 10 and 14, or as the character called "Jimmy Sears" in Anthony Bourdain's Kitchen Confidential.

He's also the undeniable doyen of dry aging, a process by which cuts of beef are stored at a low temperature and humidity inside a meat locker, then allowed to get moldy over time. The time, of course, varies — 45, 60, 90, 150, 240, even 500 days — as white mold on the surface alters the flavor characteristics of the beef just as aging does to jamón ibérico or Roquefort cheese. The longer the age, the funkier the characteristics. That's it in a nutshell. But Tesar, along with chef de cuisine, fellow Top Chef alum and beef geek Gerald Sombright, will tell you that taste varies according to the beef, its marbling and even the dimensions of the dry-aging vault in which the bone-in ribeyes and New York strips are laid to rest.

So a 60-day Akaushi ribeye from HeartBrand Ranch ($175) will taste a bit different than a 60-day ribeye from 44 Farms ($146) primarily because of the higher fat content and marbling of the former. But no matter the source, age or level of marbling, the steaks here are superlative, unlike any you'll find in the country, with the possible exception of Knife in Dallas and Knife in Plano, both run by Tesar. A 45-day dry-aged ribeye from 44 Farms ($130) presents 32 ounces of juicy, buttery beef, but feeling the funk doesn't begin until the 75- to 90-day threshold. That's when steaks begin to embody rich, earthy, nutty, even cheesy notes akin to Parmigiano-Reggiano. The 150-day Akaushi ribeye from HeartBrand ($225) gets intense with an avant-umami-funk, while the 240-day aged ribeye from 44 Farms is, simply, the Bootsy Collins of beef. And don't expect slabs swimming in their own juices. Dry-aging zaps moisture from a steak, but also breaks down the collagen, making for supremely tender meat. 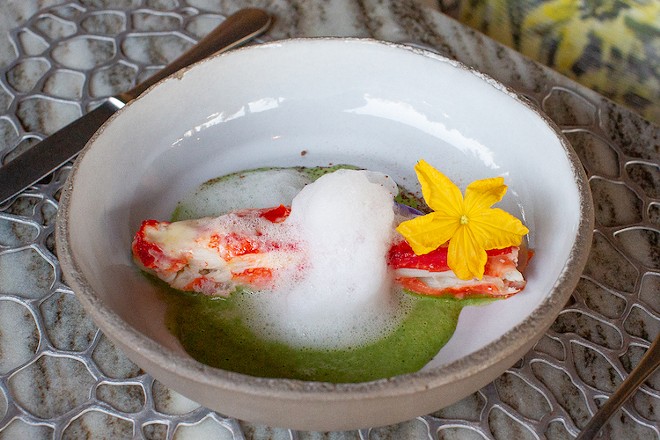 You'll notice these cuts come at a price, a high price, but their unique flavor profiles set them apart from steaks served at other chophouses. Plus they're large enough for two, possibly three people. There are sides, naturally — pricey à la carte sides — like "financier" French fries ($27) blinged out with caviar, tobiko, truffles and gold leaf. There's kimchi creamed spinach ($17), peppery avocado fries ($18) served with chipotle aioli, "Johnny" mac and cheese ($16) and a tower of fattened tempura-fried onion rings ($15) — all superb, and all superbly filling. Too filling, in fact. There are limits to this Richie Rich approach to dining for me. Hell, I'd be content with some charred asparagus and a baked potato, to be honest, but this is the Ritz, not Ponderosa, so I get it.

There are other indulgences of the non-steak kind to be had: the wedge salad ($16) crowned with a crispy rasher of Kurobuta bacon; pappardelle ($25) tossed in a Bolognese of pancetta, lamb, veal and beef; and whole vermillion snapper (market price). It's served with lettuce, pickled onions and a lemongrass dip, should you want to enjoy the fish in lettuce wrap form. Also worth noting is the complimentary bread service (love the brioche), a gin cart (how fancy) and a gorgeous selection of desserts like orange-Grand Marnier soufflé ($15) served with passion fruit sorbet, or an ethereal strawberry-mint sorbet atop lychee panna cotta, graced with an airy white chocolate-vanilla mousse and a pennant of silver leaf, then dotted with edible pearls. Pure eye candy.

Perhaps Franck Steigerwald, who's serving as the restaurant's pastry chef, should've been charged with designing the main dining room.

As it stands, there's nothing striking about the dull space apart from the odd design elements — a pomo "cloud ceiling" floating above an undulating patch of live moss; seating reminiscent of a corporate cafeteria; neon wall art; grey engineered flooring; and those dreadful arched farmhouse windows left over from the Norman's days. The whole space feels molded over like Tesar's steaks, and the decor's the one, uhh, beef I have with the restaurant. Though I suppose I shouldn't be all too displeased. At Knife & Spoon, age should always come before beauty. 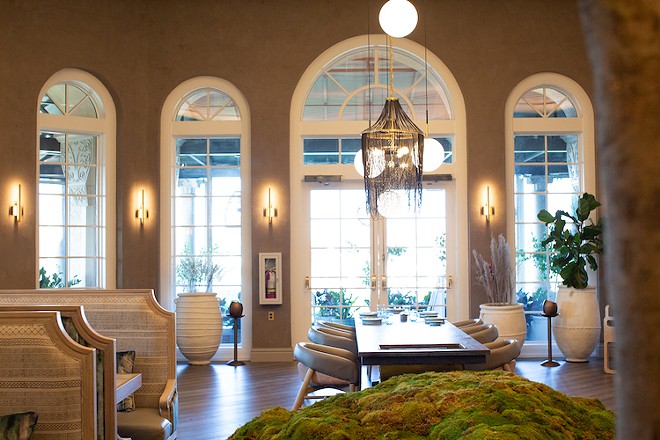