All photo by Marissa Mahoney

For most people, a trip to 7-Eleven is about getting in and out as quickly as possible. So it's easy for customers to forget about the clerks behind the counter – but they remember you, especially if you're one of those customers who makes an overnight shift sad, strange or borderline dangerous.

The 7-Eleven clerks working behind the counter at stores around Orlando have countless stories to tell, but you'll never hear them unless you ask. So we did. 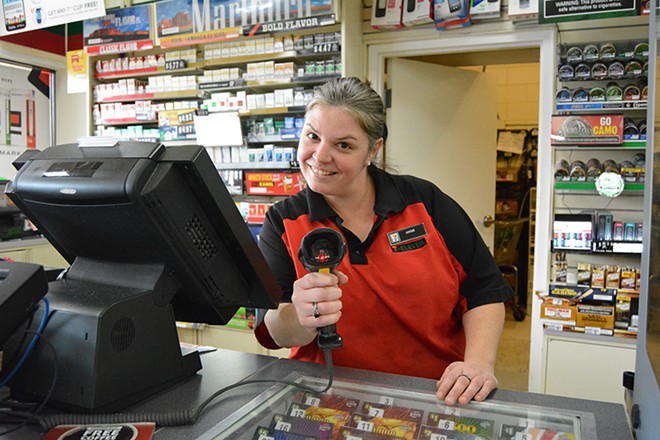 Vibe: This store is located at the epicenter of a neighborhood that's home to the city's hippest coffee shop, a record store and an artisan food market, so you'd be correct if you imagined that the beer selection here is a little bit hoppier and the Big Bites are a little more ironic.

Best story: "[A guy] just parked at the gas pump and came in, and next thing you know a customer was running in from outside like, 'Does somebody own a gray car?' Because it ended up over there by Junior's Diner in the Junior's parking lot. ... When we watched the video, he forgot to put the E-brake on, and it was a standard, and our parking lot is up and down. I have a standard, so I know. And it literally just looked like somebody started driving, like it was real slow. And it's missing cars! After going in the middle of the road, cars are missing it. [One] car apparently hit it, side-swiped it, but kept going."

Most hectic moment: Keeping up with the lunch rush. 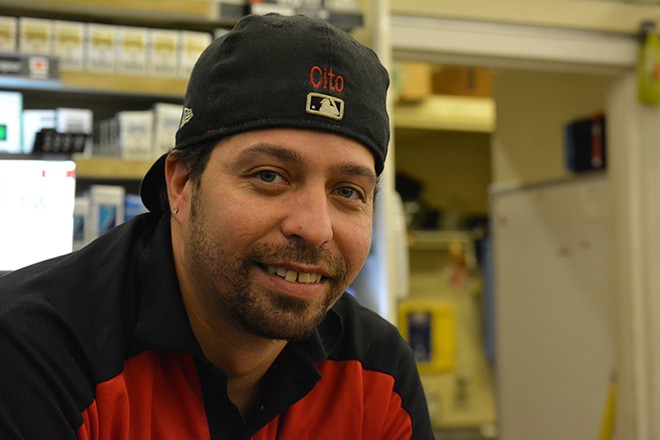 Vibe: This store's location, right off Colonial Drive at the intersection of Little Vietnam and the boozy Mills 50 bar scene, means that things can get rowdy here after 2 a.m.

Best story: "I had one guy, and he was so messed up, I had to let him sleep in my car. I had to! I didn't want to let him walk anywhere, he was just falling everywhere. I felt so bad, I was like, 'Just lay down in my car.' A couple hours later, I was like 'Knock, knock. Get out of here.' ... I had one kid come in here and he tried to steal from us. He was just trying to steal different types of items, trying to steal candy and all this other stuff. He was just stuffing his pants. And then, all of a sudden I told him to stop, wait for a second. He just ran out, and I ran after him. He left his bike right next to the Dumpster. ... he would've probably got away with it if he would have left his bike right in front of the store."

Advice to prospective new employees: "You have to be a people person to work here."

Best story: "This black tour bus pulls up; it's one of those Mercedes ones. Next thing you know, a whole bunch of black guys come out, and they're like walking out and they're messing around with stuff, throwing stuff, boxing in the aisles," McNelis says. "They" happened to be Migos, a popular hip-hop group from Atlanta. "Anyway, they were in here, and oh my gosh, they were being assholes. [My co-worker] was messing up all their orders, and they were complaining to me. ... It got me scared. No one else is coming in the store. And somebody called the cops on them, I don't know why. ... Next thing you know, two cop cars pull up, and [Migos] is freaking out," she says. Turns out, their pockets were filled with weed, which they quickly started stashing around the store. "They're scattered everywhere putting [marijuana] in aisles, ice cream trays, the bathrooms."

Special 7-Eleven clerk talent: Although her accuracy is questionable, McNelis claims to be able to pick out any pack of cigarettes from the shelves without having to look. Shout out a pack and keep her honest, but don't stash your drugs in the ice cream case. 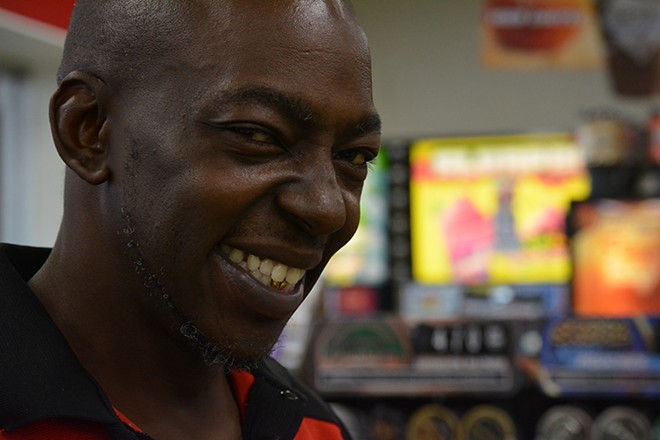 Vibe: There's old-school hip-hop playing and the store clerk is dancing on a crate, happy as a clam. Welcome to Juan's World, where clerk Juan Jones has worked the night shift for almost a decade.

A typical night: Jones has had people flash him their boobs, offer oral in exchange for beer and drop their pants to show him their junk. "What have I not witnessed?" he says with a smile. "Nothing!"

Vibe: This is your last stop before suburbia. The chaos of Orlando dwindles the closer you get to the convenience store, but even still, things can get hectic in the outskirts of downtown.

Best story: "You'll get people who pull tricks. It's not even anything good or bad, it's just like they'll point out how something will be on sale somewhere else where they see an advertised sale, and because they don't scan it properly they think that it's whatever product they're holding in their hands, and it's usually one or two shelves over. And you have to point that out, and they're like, 'Well, I'd still think it'd be nice to get a discount 'cause that was an inconvenience.' ... We had this gal pay for her gas, and the way that the card readers outside work is you have two minutes when you pay with a debit card to get your gas or it's gonna automatically credit it back to your card. [But] this lady was convinced that we had her $20 and wanted one of us to pay for it. I told her, 'No, it goes back to your card immediately following your transaction.' 'Well, this happened to me before and it didn't go straight to my account.' 'OK, then it'll go back tomorrow, ma'am. There is nothing I can do shy of paying for the gas myself.' All I really wanted her to do was just check her bank statement and prove me wrong. I will happily pay for the gas if you can prove me wrong, but I know I'm not."

Biggest frustration: "Entitlement. It's the sense of entitlement. I get that everybody's entitled to their life and their way, and I totally respect that, but at the same time there are rules and procedures. When you come in the door, the first thing you should do is see if there is a line and where it starts. Don't just jump to the first register you see and say you need $20 on 10." 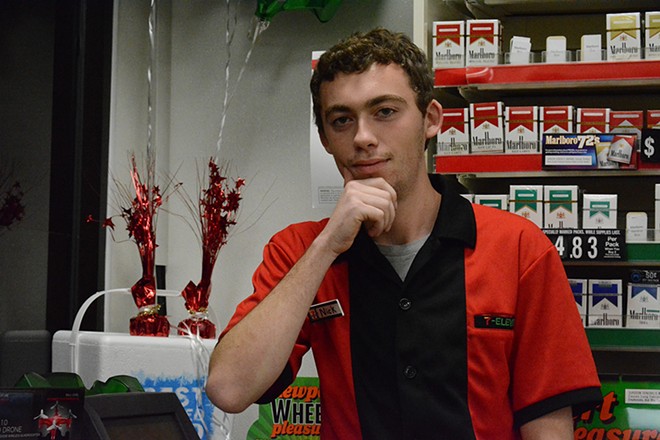 Vibe: A cardboard cutout of NFL coach Jon Gruden is enshrined by 18-packs of light beer. Rugs are modeled to look like AstroTurf. The UCF football team schedule hangs on the wall, which really just lets people know when they can get more free beer at the Basement in the likely scenario that the team loses again.

Best story: "Some guy left his car on, and then a drunk guy tried to steal it, but then he drove it into a wall. ... An interesting thing is fake IDs. A lot of people try to come in here with really bad fake IDs and you can just look at the height or their face, and it's just clearly not that. I don't know why it's awkward, but it just is."

Best customer: "This guy's like 90. He comes in on a regular basis, and he buys like five packs of green White Owl blunt wraps. I don't know what he does with them, but even if he uses them for their intended use, that's still crazy. One time, I joked around and ID'ed him, but he didn't get the joke."

Vibe: Other than an overabundance of light beer tucked away in the coolers, you would have no idea that this is a college-town 7-Eleven.

Best story: "The girls [working] here, they're scared because I have a drug dealer coming here, and I had a big fight with him. He came, insulted the customers. And the girls when they're together, he comes in. When I'm here, he doesn't come in. I tell them, call the cops without him noticing, and they're scared even to call the cops. Once I tried to be nice to him – tell him the proper way to do things. Tell him I have kids and that you should do better than that, but he came back to the old ways."

Toughest shifts: "The worst days are Friday and Saturday. I've been fighting for five years. I've been fighting these people around here. I get mad, call the cops. It's tough. I get busy and they come steal. They come, get out the big ones, Heineken, all that stuff, and they took off, ran! I used to run after them ... What they do is they park their car [in front of the store] and leave the door open. It's sad, but it's the way it is."

Vibe: Tall buildings towering in every direction, hordes of cars rattling the surrounding streets, homeless lurking at all hours and bicycle cops circling the perimeters like vultures.

"[Once] I had a guy buy a beer, go get the cup, the ice, everything, then ask me what the city's drinking laws on public drinking were, so I said, 'Well, I think the drinking laws are the same as they are in every city. If you open that beer, and one of these bike cops sees you drink that, you're gonna go to jail no matter where you're standing.' He looked at me and said, 'You out yo' mind, watch me drink this!' Then he cracked the beer and got no further than the corner across the street before the bike cops went right by him and picked him right up."

Moskyok's squad: Given all the booze-fueled debauchery that goes down in her shop, it should come as no surprise to anyone that Moskyok is on a first-name basis with most of the bike cops in the area.