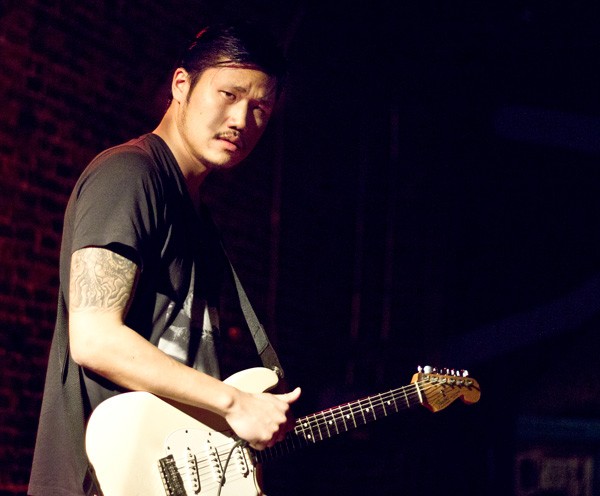 Good thing this oldies vibe is lighting up the indie scene right now, since our radio-retarded city hasn't had an oldies station in eons. Besides feeding that fix, the fresh revivalist lineup (Mar. 12, the Social) headlined by Cali buzz band Dum Dum Girls is one of the most au courant bills going. Like an even more literal girl-group cousin of the Raveonettes, DDG invoke noir and sonorousness to deepen their classics leaning noise-pop aesthetic. Nice to see an all-female outfit attack even the most basic pop innocence with vigor and guts instead of just relying on gender gimmick, especially drummer and rock & roll animal Sandra Vu. What's more, they prove how unbeatable the union of simplicity and power can be.

Packing much more punch was Denver's Tennis, the lo-fi indie-pop project by lifelong doubles partners Alaina Moore and Patrick Riley. They're also part of this reverbed-oldies  revival, but their incredibly sturdy songs have more snap, color and saliency than most. In fact, their pure, vivid songwriting makes them a superlative of the style. Tennis doesn't just brush the dust off '50s pop, they burnish it to a sparkle and give it a brightly contemporary perspective.

You can look up their well-publicized love story yourself, but they talked about how special Florida is to them because it's where they decided, while on a seafaring adventure, to form the band. And now you know their Florida Keys-referencing song "Marathon" ain't about no foot race.

Perhaps the most original of all was Canadian one-man act Dirty Beaches. Although his music can sound like obscure oldies records being played in a room down the hall, there's a rare precision to his sonic haze. Punching through the murk are his up close, hypnotically raw loops and hot-blooded, sometimes demon-chasing, Elvis vocals. There's real throb to his sound. His dark specter of noise, drone and early rock & roll achieves the intrigue that so many lo-fi abstractionists try for but more often miss. The result is a singularly riveting blend of the traditional and the  experimental.

Speaking of interesting, Quebec's the Luyas (Mar. 8, the Social) have an exotic, otherworldly pop sound that showed much more wingspan and hue in person. From their left-field orchestral touches to Jessie Stein's almost foreign-sounding vocals, what flitters about and teases on record expands impressively live. In an indie scene where everyone can often sound like everyone else, they are unique.

As if more proof was needed to demonstrate that Uncle Lou's is Orlando's Twilight Zone, it's currently hosting a month-long residency by local Glowmobile Recording Company duo the Moon is a Disco Ball every Tuesday, each edition with a different motif and changing musical guests. After seeing some unusual sights at the sci-fi-themed debut (Mar. 1) - an interesting cosmic noise set by Toecutter and a baffling one-man performance by JarlQ - I returned for "girls night" featuring Cassandra Wilcox (ex-Wilbur) and  Winter Bay (Mar. 8). Winter Bay's acoustic- chick material was blandly earnest coffeehouse fare but Wilcox was much more engaging with a loop-based live approach and greater force of expression.

As for the Moon is a Disco Ball, they were passable in strictly musical terms. But their fantastical ideas (storylines, costumes, props) and cartoonishly girly spirit is what makes these nights interesting and fun, transforming the dive bar into a kind of screwball playhouse. And though it's all definitely campy amateurishness, two things the Moon ladies do on an expert level is hula hoop and bake. The first feat is self-explanatory. But the second hits home when you consider that they're both grads of Le Cordon Bleu culinary college. So, yeah, they may be wearing fluorescent wigs and nutty outfits but they fucking slay it on desserts, which they make themselves to sell at shows. I mean, c'mon, PB&J bites! They even featured a savory item: a knockout amuse-bouche of bacon-wrapped haricot verts. Oh yeahhh.

If this oddball confluence sounds like a little adventure, it is. And these shows are free, leaving you plenty of cash to try their legit baked goods. Still remaining in this series are the "Folk Adventure" (Mar. 22) and "Enchanted Fairytale Forest"  (Mar. 29) editions.