The fight to save North America’s most endangered bird, the Florida grasshopper sparrow 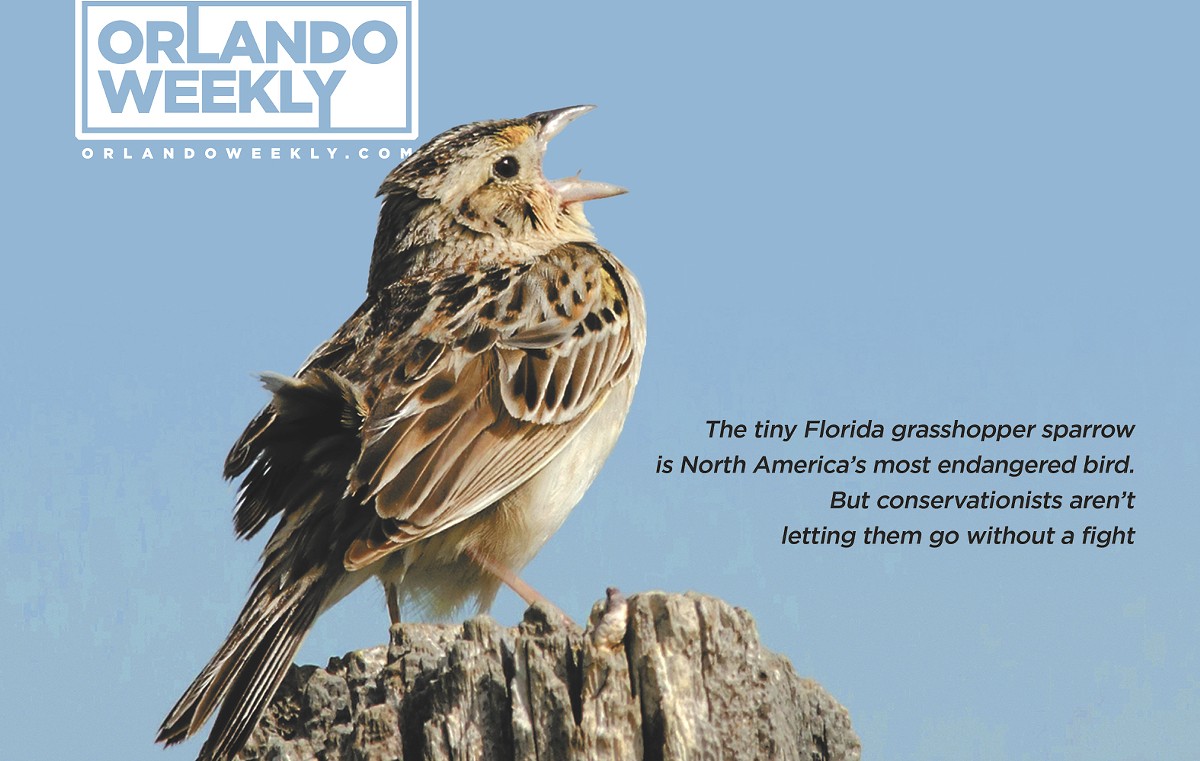 The clock is ticking. Any minute, he could get called away for a momentous occasion – the birth of his brother's first child. But at present, Andrew Schumann has other firstborns on his mind: 18 Florida grasshopper sparrows. A lot is riding on the survival of these tiny chicks no larger than a fingertip upon hatching; with only 50-60 remaining in the wild, if captive breeding fails, their kind may disappear from the planet.

As animal collection manager at White Oak Conservation Foundation, Schumann, along with his team of two keepers and two interns, manages bird programs on the 13,000-acre White Oak Plantation miles down a dirt road in rural Yulee. Driving around the property feels something like taking a worldwide safari in an afternoon; you'll see three of the five remaining rhinoceros species – Indian, white and Southern black – cavorting in open fields, feed bay leaves to a crèche of reticulated giraffes, admire the magnificently curving horns of the lesser kudu and the striking stripes of the okapi, and get a good look at one of few remaining Père David's deer, a species that is extinct in the wild. There is no place quite like it. White Oak is not merely a showpiece, however; it is a state-of-the-art research facility working to save some of the world's most critically endangered species.

The flock Schumann oversees comes from the earth's far corners – the Amazon rain forest, sub-Saharan Africa, subtropical U.S., New Guinea. Some are hued so vibrantly they could blend into a Leonid Afremov painting – double-wattled cassowaries, Mississippi sandhill cranes, Southern ground hornbills. There are creatures so exotic they may well be the stuff dreams are made of – statuesque wattled cranes, palm cockatoos with smoky-grey mohawks, blue-billed curassows with kinky, inky-black crowns.

Tipping the scales at barely an ounce, with black and grey plumage streaked with brown and yellowish-brown, these secretive ground-dwellers from south-central Florida have neither the size, the distant homeland, nor the dramatic appearance of many of their neighbors at White Oak. Schumann's fondness for them is plain nevertheless. He describes the "delicate" way they disassemble grasshoppers before eating them, noting with a chuckle that "they like green ones." The few who are familiar with this diminutive songbird seem to have a soft spot for them, understandably so – they're just so darn cute, hopping about with a plucky tenacity that calls to mind the sweet precociousness of children.

No one is giving up, though; far from it. A herculean effort is currently under way to pull the sparrow back from the brink of extinction. With its breeding program, for which it receives some federal funds, White Oak is the most recent addition to a large coalition that includes U.S. Fish and Wildlife Service, Florida Fish and Wildlife Conservation Commission, the Florida Grasshopper Sparrow Working Group, the National Audubon Society, Rare Species Conservatory Foundation, Archbold Biological Station, the Florida Park Service and others, racing the clock to save the Florida grasshopper sparrow.