The 10 most important American political stories of 2022: Part One

The end of Roe, the Trump collapse and more. 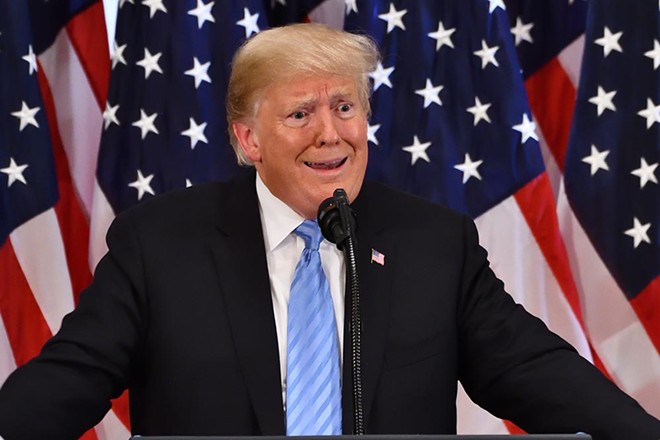 photo via Shutterstock
Donald Trump ends 2022 weaker than he’s ever been.

Welcome, friends, to our favorite time of year, when columnists hither and yon fill their allotted inches and/or pixels with retrospectives written well in advance, as we are relaxing with kith and kin while sipping cognac by the fire (more accurately, downing cheap bourbon while watching Star Wars before passing out alone on the couch) while you read this.

So let’s fill some space: This week and next, the 10 most important American political stories of 2022; the week after, my 10 biggest questions for 2023.

It wasn’t a surprise that five far-right members of the Supreme Court rejected 50 years of precedent to eliminate two generations of abortion rights. But it was still a shock — first, when Justice Samuel Alito’s draft opinion leaked, then when the ruling became official. Thirteen state abortion bans (or severe restrictions) went into effect, mostly in the South, criminalizing what had a few years ago been a routine medical procedure and none of anyone’s goddamn business.

Over the next two months, the number of legal abortions fell by 6%. Women with the means to do so traveled to obtain abortions. Others performed self-managed abortions or procured abortion pills from Mexico or Europe off the internet.

Congressional Democrats made noise about national legislation to protect abortion rights but failed to deliver. Republicans hinted at a national abortion ban the next time they have control of Washington. The Biden administration wrung its hands.

But if the far right thought women would meekly accept Alito’s smarmy, ahistorical paternalism, they were sorely mistaken. Voters in six states — California, Vermont, Michigan, Kansas, Kentucky and Montana — backed abortion rights in referenda this year, everywhere the question was on the ballot.

In a wild turn for anyone old enough to remember the “safe, legal, rare” ’90s, Democrats made abortion access the centerpiece of their congressional campaign. And succeeded.

Until the returns came in, Republicans insisted a red wave was coming. Pundits and reporters took it as a given, not without cause. On a good day, President Biden’s approval ratings hovered around 40%. Inflation was over 8%. Historically, numbers like that doomed the president’s party in a midterm. Plus, generic polls showed that Republicans had a small but significant lead in generic-ballot questions, another indicator that the GOP was in for a good night.

And then the red wave turned into a puddle. Not everywhere, of course: Republicans exceeded expectations in New York and Florida, where the state Democratic Party somehow continues to find new definitions for the word “shambolic.” But across the country, Republicans lost Senate and House districts they should have won, enough to keep Democrats in control of the Senate and give Republicans a very narrow margin in the House.

There’s no single factor that kept them at bay. Abortion was a big one, yes. But perhaps biggest of all was the cavalcade of incompetence, corruption, insanity and assholery the GOP offered voters in its MAGA candidates: Blake Masters in Arizona, Mehmet Oz in Pennsylvania, Herschel Walker in Arizona, and so on.

Donald Trump ends the year weaker than he’s ever been.

Worst, his allies are abandoning him — not because of his crimes, but because he’s a loser. His endorsed candidates got crushed in November; his plan to triumphantly announce another presidential bid turned into a pathetic attempt to remain relevant. In polls, Republicans are ditching him for Florida Gov. Ron DeSantis.

It’s possible Trump isn’t finished. But with each passing day, it seems just as likely that his presidential campaign will coincide with a felony indictment.

Russia’s invasion of Ukraine had political ramifications all over the globe. Putin-friendly Republicans — cheered on by Glenn Greenwald and Tucker Carlson — criticized American and NATO efforts to arm the Ukrainian military. More importantly, the conflict and the international community’s sanctions drove up energy and food prices in the United States and Europe, stoking an already-burning inflationary fire.

Russia is also working with Iran to acquire drones it’s used to strike Ukrainian cities, a partnership of authoritarian American adversaries that have both taken aggressive measures to squelch dissent this year.

Adding to the tension was Russia’s arrest and conviction of WNBA star Brittney Griner on charges of carrying cannabis oil, for which she was sentenced to nine years. Earlier this month, the Biden administration traded Griner for Russian arms dealer Viktor Bout. But it could not secure the release of Paul Whelan, a former marine Russia has jailed for four years on espionage charges.

A year and a half ago, the big brains assumed that post-pandemic inflation was transitory. They were wrong.

As global economies rebounded, people had money to burn, but understaffed and overloaded global supply chains couldn’t keep up. As companies hired to meet demand, wages soared, and prices with them. (Corporate profits rose, too.)

Life became unaffordable. Annual inflation approached 9%, a number not seen since the 1970s. The Federal Reserve aggressively raised interest rates, and the stock market spiraled. But so far, the Fed has slowed inflation without triggering a recession. So far.

Republicans blamed President Biden’s Covid stimulus, though that was a small piece of a worldwide puzzle, and the U.S. has fared better than many Western countries.

Still, Biden’s polling took a hit from which he hasn’t recovered.