Savage Love: ‘Seeing my wife naked sends me into an anxiety attack’ 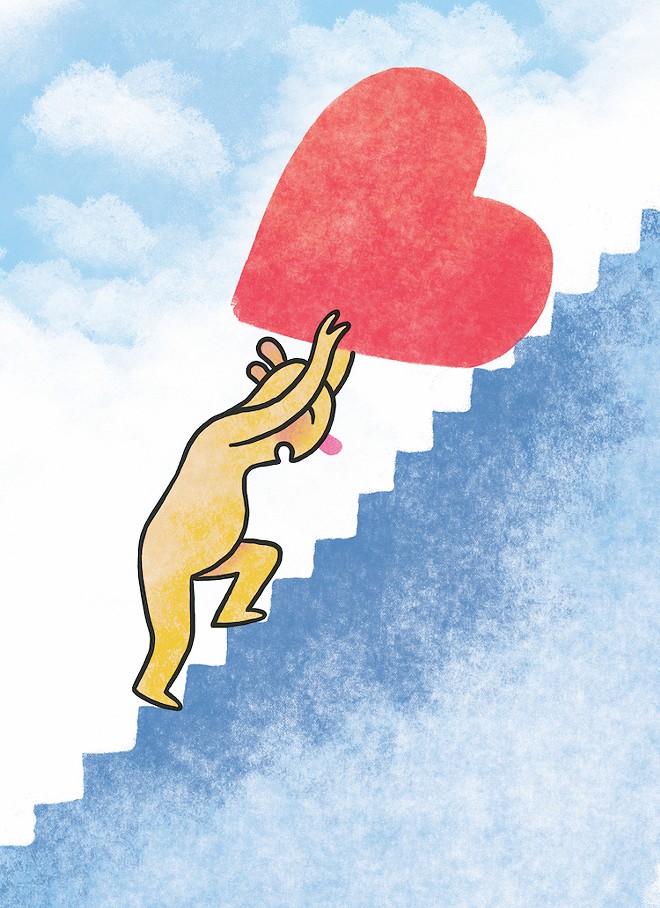 I was raised in a religious home and didn't lose my virginity until the embarrassing age of 26. I was told by the church to save it for marriage and I was a virgin until I met the woman who would become my wife at a party. I said to hell with it, we had a one-night stand, and we've been together now for eight years. I'm tall and slim and my wife is short and heavy. Like an idiot I believed it's what's on the inside that matters. My wife is the sweetest, most thoughtful person I've ever met and I love spending time with her, but I have absolutely no sexual attraction to her. As a result, I've all but stopped initiating sex and on the rare occasion when we do make love I make her come twice while I'm struggling just to get off.

I know it's shallow and I know beauty is only skin-deep but what am I supposed to do when seeing my wife naked sends me into an anxiety attack? When I'm helping out with laundry, I get bummed because there's nothing in her wardrobe I find attractive on her. Even when I look at old pictures of us together I get extremely depressed because I know this is the best she's ever going to look. It doesn't help that she finds me handsome and regularly tells me so.

I was so relieved to get all the way to end of your letter without learning you had kids. Because that means I can advise you – with a clear conscience – to file for divorce and move the fuck out just as soon as it's possible to do so. Not for your own sake, ITS, but for your wife's sake.

If you prioritize hotness over niceness, you run the risk of spending decades with a person who has aged out of hot and was never nice.

You say you're growing increasingly resentful. I hope your resentment is directed at all of the people who victimized you. Your wife isn't one of them. It's your parents you should resent, ITS, as well as all the sex-phobic bullshit artists out there masquerading as "faith leaders."

You should be angry with yourself too. While I know from personal experience how a religious upbringing can put the zap on a kid's head, you were a grown-ass man when you met your wife at that party. You couldn't have slept with her that night – you couldn't have lost your virginity in a one-night stand – if you hadn't already rejected nearly everything you'd been taught about sex. If you were capable of having premarital sex, you were capable of refraining from marrying the first person you slept with.

Your wife is gonna want to know why you're leaving her – of course she is – but you're not going to tell her the real reason. You're going to make something up. You want kids and she doesn't (or vice-versa), you married too young (which is true), you have unresolved childhood issues (and don't we all).

While you won't be able to spare your wife the pain of a breakup, ITS, you can spare her the pain of learning the person she's been sleeping with for eight years is repulsed by her body. You can't be a good husband to her, ITS, but you can be decent ex-husband. And to do that – to be her decent and loving and supportive ex – you can't set her self-esteem on fire on your way out the door.

And your wife's body isn't repulsive. She's not someone you're attracted to, ITS, and you're not obligated to find short and round women sexually appealing. But while "tall and slim" are more closely associated with conventional concepts of attractiveness, ITS, not everyone's into tall and slim. There are people who are into short and round and people out there who are attracted to all body types and people who are utterly indifferent to bodies. Your wife deserves the chance to find someone who's sincerely attracted to her. Even being alone would be better than spending decades with someone who recoils from her touch.

For the record: What's on the inside does count. It matters. If you met a woman who was more conventionally attractive – if you were with someone who was your idea of hot – and over time she revealed herself to be an asshole (if she was rude to waiters, if she was emotionally abusive, if she was a Trump supporter, etc.), your attraction to her would wither away. What you want – not what you'll get, ITS, but the best you can hope for – is some combo of hot on the outside (subjective and personal) and good on the inside. And the longer you're with someone, ITS, the more important good on the inside becomes.

Time is a motherfucking meat grinder and it makes hamburger out of us all. If you prioritize your idea of hot over all other qualities, you run the very real risk of spending decades with a person who has aged out of hot and was never nice.

Longtime reader asking for advice. I'm a med student. I came to the U.S. when I was 18 in order to go to college, and I'm still in the U.S. I'm 25 now and I've been dating my boyfriend for about three years now. We're somewhat monogamous and been living together for two years. I'm out as a gay man where we live but my parents and family back in Brazil have zero idea. As you may know, Brazil has a weird relationship with sexuality. We're seen and for the most part are very open but our culture is also very homophobic. My BF has been pressuring me to come out but I've been apprehensive considering how important family is to me.
Fears A Massive Implosion Likely, Yet ...

Family is important to you and you're worried you might lose yours if you come out to them. But you're definitely gonna lose them if you don't. Because to keep your life a secret from them – to hide your boyfriend from them – you're going to have to cut them out of your life. It'll be little things at first, FAM, but over time the amount of things you have to keep from them grows. Lies pile up on top of lies and the distance between you and your family grows. Before you know it, they don't know you at all anymore and you don't know them. Because you can't risk letting them know you. So to avoid their possible rejection, you will have rejected them. You will have lost your family.

I know, I know: It's scary. I came out to my very Catholic family when I was a teenager. I was scared to death. But if they couldn't accept me for who I am – if I couldn't rely on their love and support – what was the point of having them in my life at all?

P.S. No one likes being someone's dirty little secret. It hurts your boyfriend to see the person who claims to love him prioritize his family's presumed bigotry (it's possible they'll react more positively than you think) over his feelings and dignity. By not coming out, FAM, you will lose the family you were born into and the one you've created with your boyfriend too.

_
This story appears in the April 22, 2020, print edition of Orlando Weekly. Our small but mighty team is working tirelessly to bring you news on how coronavirus is affecting Central Florida. Please consider supporting this free publication with a one-time or monthly donation. Every little bit helps.