Life in the Big Orange 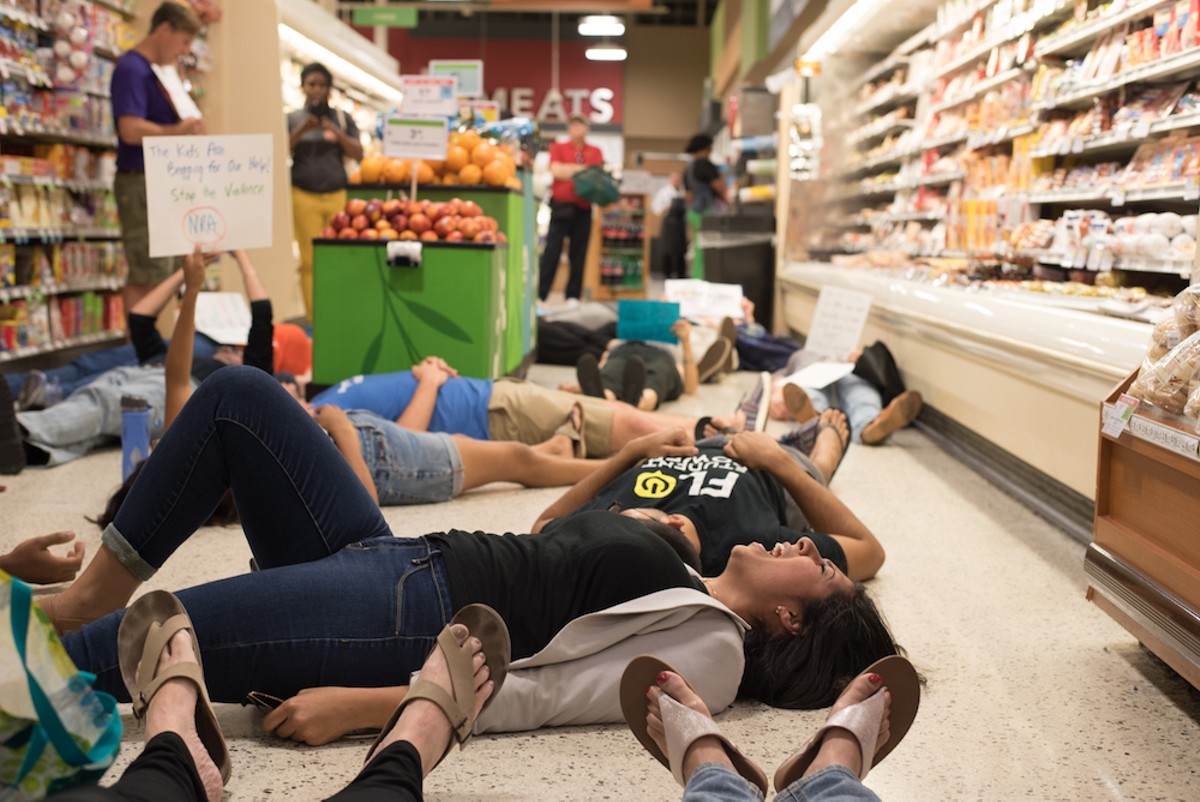 While there were a few bright stars in Orlando's sky this year, 2018 mostly felt like a repeat of the past two years: an all-consuming black hole sucking the little force we have left to power this dark timeline.

Amid the daily barrage of scandals from the Trump administration and shenanigans of Florida officials, Orlando dealt with its own political drama and protests. We started 2018 renewing the call for action against gun violence after continued mass shootings in the state, and ended the year with reports that 358 people have been shot and killed in Orlando since 2014.

It wasn't all bad, though – community members came together to help hundreds of families who evacuated from Puerto Rico after Hurricane María, and local unions fought tooth and nail to bring a $15 minimum wage to Central Florida. Despite Florida remaining #onbrand by electing still more terrible politicians (we had really hoped to see the last of Rick Scott) and holding a recount that fried everyone's last nerve, Orlando voted to send more women to Tallahassee, including the state's first Iranian American lawmaker, Anna Eskamani. Perhaps more importantly, a movement started by Orlando activists to restore voting rights to about 1.5 million former felons succeeded with the resounding passage of Amendment 4.

1. Pulse first responders still struggled with the trauma 19 months after 2016 mass shooting: More than a year and a half after a deranged gunman stormed into the gay nightclub Pulse and killed 49 people, first responders who answered the call for help that morning still struggled with symptoms of post-traumatic stress disorder as their departments and state lawmakers grappled with how to deal with the issue. At least three first responders who responded to the massacre and reported PTSD left their jobs under varying circumstances, while others sought treatment through the system. Omar Delgado, a former corporal with the Eatonville Police Department who was let go from his job despite being proclaimed a hero, told us that every night since the shooting, he relived the tragedy in his nightmares. At the time under Florida law, first responders diagnosed with PTSD were not considered to have workplace injuries that would qualify for workers compensation, like lost wages or medical bills. A new law passed by Florida lawmakers in 2018 now allows first responders that have seen certain traumatic events to file workers compensation claims. (Jan. 17)

2. Environmental activists rallied to save the Split Oak Forest from an expanding toll road: For decades, Central Floridians have used the Split Oak Forest Wildlife and Environmental Area as a beautiful respite from the outside world – which is why they were shocked to learn local transportation officials planned to cut right through the middle of Split Oak to expand a toll road. The nearly 1,700-acre preserve on the outskirts of Orlando's Lake Nona community harbors threatened gopher tortoise species, Florida scrub jays, sandhill cranes, Sherman's fox squirrels, gopher frogs and bald eagles. Orange and Osceola Counties purchased Split Oak more than 20 years ago to offset wetland impacts, but the Osceola County Expressway Authority plans to expand the Osceola Parkway east almost 10 miles with routes that would bisect Split Oak. (Feb. 7)

3. Thousands demanded gun reform change at March For Our Lives rally in Orlando: Tens of thousands of people marched through downtown Orlando as part of a nationwide rallying cry against gun violence started by student survivors of the Marjory Stoneman Douglas High School shooting. After a gunman slaughtered 17 in Parkland, young people around the country organized rallies to advocate limiting semiautomatic assault weapons and high-capacity magazines. During the march in downtown Orlando, protesters carried a banner with 49 butterflies to represent Pulse victims and 17 eagles to represent Parkland victims. While the Florida Legislature implemented no major gun reforms after Pulse, state lawmakers passed some gun restrictions weeks after Parkland, including a ban on bump stocks and raising the minimum age to purchase a firearm to 21. (March 24)

4. Hundreds of families who evacuated Puerto Rico adjusted to life in Central Florida: Tens of thousands of Puerto Ricans who fled the island after Hurricane María's catastrophic impact on their home found refuge in the Sunshine State, especially in Orlando and Kissimmee. Local officials, advocates and community members did a lot to help families find resources but remained frustrated by the lack of affordable housing in the Orlando metro area. Evacuees struggled to find housing in a tourist mecca, and jobs high-paying enough to afford exorbitant security deposits. The Federal Emergency Management Agency threw evacuee families into turmoil by ending voucher programs that provided hotel rooms for thousands, including María "Betzy" Santiago Burgos – a struggling mother who accepted help with housing from a friend who ended up killing her. (March 28)

5. Central Florida veteran fought the federal government for legal medical marijuana: Iraq War veteran Jose Belen, who struggled with PTSD more than a decade after his 14-month deployment in Iraq, found himself toe-to-toe with the federal government in a lawsuit for the right for all to legally use medical marijuana. The complaint argued that the classification of marijuana as a Schedule I drug under the federal Controlled Substances Act is unconstitutional, as is its definition of the herb as a drug with "no accepted medical use," despite the federal government admitting in other policies that cannabis "can be used safely under medical supervision." While several of his fellow plaintiffs required cannabis for physical ailments, Belen's use of medical marijuana to help with flashbacks showed those afflicted with psychological disorders could also find the plant useful. (April 18)

6. UCF's Shaquem Griffin became the first one-handed athlete in NFL history: At age 4, Shaquem Griffin's left hand was amputated due to complications from a rare birth defect called amniotic band syndrome. But his father pushed Griffin and his twin Shaquill Griffin to compete alongside each other, never allowing Shaquem's physical hindrance to act as a drawback – and it paid off. The 22-year-old former outside linebacker at the University of Central Florida was selected in the fifth round of the NFL Draft by the Seattle Seahawks, making him the first one-handed athlete in the league's history. "I couldn't breathe," Griffin told ESPN following his selection. "I didn't know what to say. I was trying to get the words out, but I couldn't talk." (May 2)

7. Protesters stage a die-in at Publix in Orlando after $670,000 in political donations to 'NRA sellout' Adam Putnam: About 15 people lay down in the deli aisle of the Mills 50 Publix chanting "Boycott Publix! Boycott Publix!" Student survivors of the Parkland mass shooting called for die-ins at the Lakeland-based grocery chain after a Tampa Bay Times report revealed Publix gave an unprecedented $670,000 to Agriculture Commissioner Adam Putnam, a Republican gubernatorial candidate unnaturally attached to the gun lobby who described himself once as a "proud NRA sellout." Publix later said it would suspend all political donations. (May 25)

8. Too big to live and too big to die? Fashion Square Mall teeters on the brink: While large malls continue to thrive, small and midsize malls, like the Orlando Fashion Square Mall, have fallen on hard times over the last decade. In 2017, a record 6,985 retail stores closed in the U.S. This year, retailers were on pace to shutter roughly 10,000 stores nationwide, in what many analysts referred to as the retail apocalypse. Although reports surfaced this year that Tampa developer DeBartolo Development had lined up to purchase the property and Orlando Eye developer Chuck Whittall said he wanted to tear it down for an outdoor entertainment complex, Fashion Square lives on. (July 4)

9. Orlando caught serious flak for its real-time surveillance partnership with Amazon: Since February, Orlando leaders have been experimenting with facial recognition software whose capabilities and usage are unprecedented among law enforcement agencies. The program was being tested on a small number of cameras, but if and when the program becomes fully operational, city officials hope Rekognition will help them catch criminals, find missing children and identify threats by essentially turning more than a hundred public street cameras into constant face-scanning machines. Privacy advocates worry the program is a slippery slope into a dystopian world of government surveillance. Multiple studies show facial recognition systems make mistakes – particularly on dark-skinned women. Misidentification could lead to innocent people being wrongfully detained by police for crimes they didn't commit, or worse, trigger confusion that leads to a deadly encounter. "If facial recognition is becoming a new norm in the way Orlando is talking about, then we should all be very afraid," Electronic Frontier Foundation attorney Jennifer Lynch said. (Aug. 8)

10. Central Florida advocates called for Seminole County Tax Collector Joel Greenberg's resignation over Islamophobic post: Central Florida advocates started a petition calling for Seminole County Tax Collector Joel Greenberg's resignation after he made an Islamophobic post on Facebook: "Name just ONE society in the developed world that has benefited in ANY WAY from the introduction of more Muslims. Just one. Asking for a friend." Greenberg also included in the comments a link to an article from Jihad Watch, a site that critics have called anti-Muslim propaganda. Greenberg eventually took down the original post, though he refused to apologize. In October, two federal lawsuits were filed against Greenberg by former employees, including one by a Muslim woman who alleged Greenberg fired her after discriminating against her gender, race and religion. (Aug. 20)

11. Disney World union workers approved contract for $15 minimum wage by 2021: Amid whoops and cheers, Disney World union workers in Orlando overwhelmingly approved an agreement with the theme park company to raise the minimum hourly wage to $15 by October 2021. Leaders from the Service Trades Council Union, which represents 38,000 employees among its six unions, say 13,673 workers voted Sept. 5-6 across Disney on the historic contract. More than 99 percent of workers – 13,557 votes – were in favor of the agreement negotiated by unions after a hard fight spanning months. Belinda Osorio Hanzman, an Animal Kingdom housekeeper who made a $10.50 hourly wage, said the raise would help her take more of her paycheck home – the majority went toward health insurance for her family. "This is going to change my life," she said. (Sept. 6)

12. Florida law enforcement officials opened inquiry into Rick Singh after lawsuit alleges he misused taxpayer funds: After former employees alleged in a federal lawsuit that Orange County Property Appraiser Rick Singh spent taxpayer money on personal trips and brought strippers into the office after hours, the Florida Department of Law Enforcement said it planned to open an inquiry into the accusations. Singh's former finance director Aisha Hassan and communications director Laverne McGee filed a lawsuit in November alleging Singh subjected them to sexual harassment and a hostile work environment. "Singh referred to women as 'bitches,' 'whores,' and 'skanks,'" the complaint alleged. Singh's office said the allegations were "completely baseless and clearly made with the sole intention of damaging Mr. Singh personally." (Nov. 30)

13. OUC coal plants are linked to spike in rare cancer cases in East Orange County, lawsuit claims: Residents of Stoneybrook, Avalon Park and Eastwood filed a lawsuit in December accusing the Orlando Utility Commission's coal-burning power plants of contaminating the properties of more than 30,000 residents. The complaint alleges that homes and public spaces were polluted with metal, chemical and radioactive residues that correlate with a recent spike in rare cancer cases in the area, spanning 15,000 homes. The lawsuit claims developers of the area and their associates, including Lennar Corporation, U.S. Home Corp., Avalon Park Group and Avalon Park Group president Beat Kahli, are liable for property damage as they've marketed the neighborhood to homebuyers without warning of the health risks while failing to address any pollution problems. Both OUC and Avalon Park Group said they would not comment on pending litigation. (Dec. 20)