LOOK WHAT TURNED UP …

Read what you want into hodgepodge of photos that came tumbling out of the folders that had piled up at Orlando Weekly's former offices on Jefferson Street. (We're now at 100 W. Livingston St., across from the LYNX station.) The familiar faces and stories that went with them brought a few tears and snorts, but only to those who remembered the Orlando of 10 years ago. A lot of our readers were around then, but probably only a few can remember. We grabbed a few photos to share, along with our reminiscences. If you've got any interesting updates on the subjects, feel free to send them along to [email protected].

PATRICK SCOTT BARNES
Words with power: Patrick Scott Barnes, seen here contributing time toward literacy for children, is the poet/playwright/writer behind "Backroom Words," the city's longest-running poetry/spoken-word series which he started almost 10 years ago at Go Lounge. It was last a weekly feature at Bodhisattva until the club closed earlier this year. Our favorite recollection of Barnes, from the May 19, 1999, Orlando Weekly: "The May 10 Um&#246;ja show at CityJazz at CityWalk was going better than planned. Universal's bigwigs were there. Um&#246;ja was jammin'. Around 1:30 a.m., the band invited spoken-wordsmith Patrick Scott Barnes onstage to perform 'Hate Fire,' a piece about racism. The usually provocative Barnes cut out the cuss words so as not to culture-shock the yuppie-tourist crowd. He did, however, leave in 'nigger' and 'cracker.' The management pulled the plug midway through the piece, and the crowd broke into applause. Barnes still isn't sure if the approval was for him or the abrupt ending." 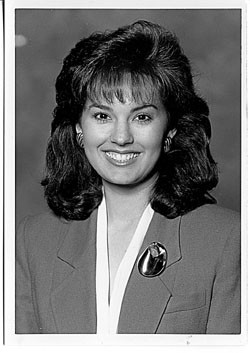 MARLA WEECH
Weech wash: When news anchor Marla Weech was at the top of her prim, God-bothering game on WFTV Channel 9, we lived to tear her a new one in the pages of this publication almost every week. Then one of us met her in person and fell madly in love, effecting a 180-degree turnaround in our suddenly fawning editorial coverage. By the time Weech had been busted down to WRDQ "Action" 27, we were decrying her humiliation with a strident indignation that must have baffled our readers &#150; or at least the ones who don't know what a good, old-fashioned, life-changing crush looks like. 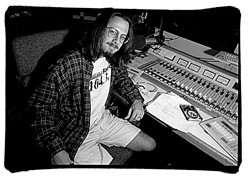 ERIK DENNISON
Real hair weekends: Erik "The Viking" Dennison's fixation with Real Radio 104.1 speaks for itself; he's been there since 1992, introducing his on-air personae to Orlando (he moved from Missouri) on the late-night Erik in the Dark program. Since then, Dennison's ear for popular but not overplayed music has tempered the station's lineup. He serves as both a DJ and the music director behind the station's "Cutting Edge Weekend" (formerly "Real Music Weekend"). And his name is permanently attached to the club night Sunday Night Vinyl, for which he DJs at Independent Bar. And Dennison has always integrated local music into his mix, probably one of the big reasons for his professional longevity. 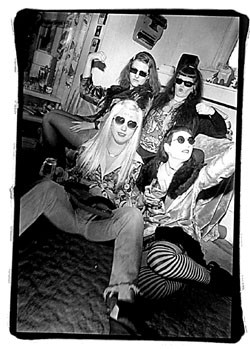 BITCH RAG GIRLS
Bitch fest: For a good few years there in the late 1990s, it seemed as if the Bitch Rag girls ruled Central Florida &#150; mostly because they did. Their frisky, friendly 'tude flowed as freely through the pages of the 'zine they published as it did across the stages they took over for a variety of fondly recalled theme nights, which saw top area bands sharing the bill with contests of human skill and endurance. (Creamed-corn wrestling at the F.B.I., anyone?) Whenever you see two women wrestling atop a bed of slippery foodstuffs, you have these riot-grrl impresarias to thank.

XANADU
Gone today, the home of tomorrow: Xanadu, the Home of the Future was an early-'80s enterprise; it was one of three franchises, the others in Gatlinburg, Tenn., and Wisconsin Dells, Wis. The photo immortalizes the architectural oddity upon its closing in 1996, but the upside-down Styrofoam cup, as it is commonly referred to, is still standing, even after the hurricanes. Active chatter on message boards proves the cult following for the attraction of the future that has yet to be. There's even talk about a $1.7 million grassroots restoration project and squatters living inside.

BEN WHITE RACEWAY
Watch your (dance) step: There's a vibrant chapter in Orlando history that isn't much discussed. Back in the 1960s, the city-owned Ben White Raceway on Lee Road was the winter capital of harness racing, bringing colorful types from around the world to watch the horsies. Former Mayor Glenda Hood is the heavy charged with pounding the final nail in the raceway's coffin in 1995, eventually turning it into Trotters Park. But there was a time when locals knew where to find the best and freshest "compost" (aka cow manure): out by the stables, near the dance hall.

WAYNE BRADY
First pour: Of all the talented performers who have left Orlando to seek their fortunes in La-La-Land, none has done better for himself than Wayne Brady, the SAK Theater and FunnyEola stalwart whose free-associative gags and flair for extemporaneous song composition were Orlando staples long before Whose Line Is It Anyway and The Wayne Brady Show hit the airwaves. When paying customers lined up for SAK shows in those halcyon days, little did they know that they were watching the guy who would one day serenade his morning cup of coffee in one of the most obnoxious TV ads ever made. On second thought, reading the future isn't always such a gift.

PHAT-N-JAZZY AT BARBARELLA
Back in the day: Now that "Phat-N-Jazzy" can be counted on like clockwork for its every-Tuesday-at-The Social excursion into DJ fusion, it's hard to believe that it was an experimental night in 1994 at a club called Barbarella. Devotees quickly aligned themselves with the hand-lettered posters that ultimately announced the birth of acid jazz. The impression left by the musical movement forever changed the sound of the city, thanks in large part to the masterful Sam Rivers whose saxophone stylings signed, sealed and delivered the dope.

SAM RIVERS
Back in the day, part 2: Sam Rivers was the shit in his acid-jazz heyday, but 10 years later his brilliant music still radiates like an alien in our midst. Tune in the frequency and you're on your way to another world. 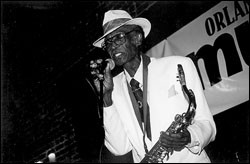 NOBLE "THIN MAN" WATTS
R.I.P: Noble "Thin Man" Watts did play the blues, because that's what he had to do to earn a living. In truth, his heart was in rhythm and blues, like the kind he played in the 1950s with the house band at Sugar Ray Robinson's nightclub in Harlem. For sure the DeLand native loved music, performing on his saxophone regularly at the Boot Hill Salon in Daytona Beach into his mid-70s right up until his death in August of pneumonia; he was 78 years old. We had the honor of having Watts perform at the inaugural Orlando Music Awards in 1997 and we have this photo to remember the dashing musician. 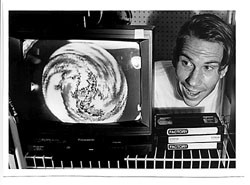 RALPH HASLACKER OF FACTORY VISUALS
Far out, man: Ralph Haslacker of Factory Visuals made his mark on this town during the rave years. The company's forte? Providing the computer-generated images that were projected on screens as part of the total dance party experience. These live multimedia presentations were called upon far and wide for local events as well as major dance happenings in the Southeast with as many as 15,000 party-goers. 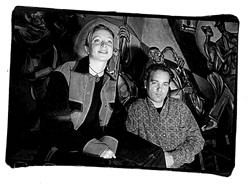 SHAYNI HOWEN AND JIM FAHERTY
Salad days: After an extensive renovation in the mid-'90s of the Sapphire Supper Club (now The Social), head honchos Shayni Howen and Jim Faherty had the downtown scene in their hands. The Sapphire was the premier club for music &#150; local, national, it didn't matter. In those days, the red-haired Howen was omnipresent &#150; in the club, on the town &#150; involved in all matters of art and music. Her natural affinity for style infused the Sapphire, down to the jazz paintings by local artists on the walls. Faherty was the mystery man who was there but never really there. Trivia question: Name Howen's blond sister who was influential in her own right on the downtown music scene. (Answer: Stace Bass.) 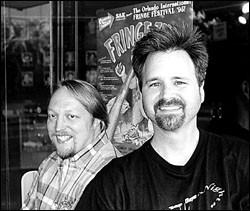 TERRY OLSON AND ANDY ANTHONY
Things do change: That is indeed actor/director/administrator Terry Olson on the left, sporting a hairdo from an earlier time and place. While we've become accustomed to his gelled-high spikes and business suits, back before Olson was king of Orange County Arts & Cultural Affairs, he and partner Andy Anthony planted a wild seed called the Fringe, which first brought strange, live theater to the streets of downtown Orlando in 1992. Actually, Olson's roots date further back and spread across organizations including SAK Comedy Theater, Orlando Theatre Project and Central Florida Performing Arts Alliance.