If Biden plans to be a doormat for the new Republican House or the radical Supreme Court, he should bow out of 2024 now 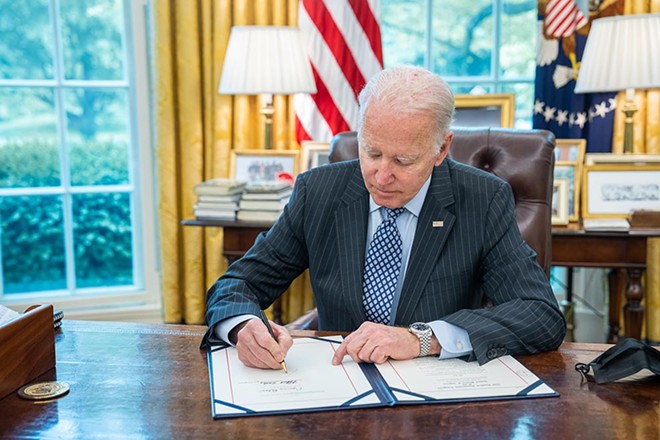 On day 549 of his presidency, Donald Trump had a net approval rating of -11.1. By far, that made him the least popular president since modern polling began. He was about five times more unpopular than Barack Obama, Bill Clinton and Ronald Reagan were halfway through their second years — and like all of them, his party got clobbered in the midterms.

Unlike those presidents, Trump didn’t win a second term (his lies and/or delusions notwithstanding).

On day 549 of his presidency, Joe Biden had a net approval rating of -19. According to the generally accepted rules of politics, such numbers presage a Democratic slaughter this November.

Yet Democrats are even money to hold the Senate. And while they face longer odds in the House — geography and gerrymandering give Republicans structural advantages — they’ve been ahead or tied in most recent generic-ballot polls. Democrats have also posted huge fundraising numbers, which doesn’t suggest a party trudging to the gallows.

Democrats’ improved position could be fleeting — a temporary reaction to the Supreme Court overturning the right to abortion. Most elections revert to the fundamentals. And when only 13 percent of voters say the country is on the right track, the fundamentals aren’t good for the party in power.

With three months until the election, circumstances can change. Falling gas prices might curb inflation, or the Fed’s rate hikes could lead to a recession. Most likely, though, the political cake is baked.

So understanding what’s driving Biden’s unpopularity is important: his own party.

As divisive and despised as Trump was, he kept his base happy. From 2018 on, Trump consistently drew the support of 90 percent of Republicans, and never dipped below 81 percent, while his overall ratings hovered in the high 30s and low 40s.

By contrast, a New York Times poll earlier this month found that Biden has the support of just 70 percent of Democrats. Nearly two-thirds of his party wants a new nominee in 2024, including more than 90 percent of Dems under 30. This collapse has driven his approval rating to an abysmal 33 percent.

Biden’s problem isn’t his agenda. It’s the perception that he’s too old and feckless to accomplish it. As a truck driver told the Times, “He’s just not aggressive enough in getting his agenda done. Trump wasn’t afraid to get his people in line.”

I could write a book on that quote.

Let’s start here: Trump couldn’t get his people in line — at least not when Republicans controlled Washington. He took office with 52 Republican senators and a 37-member Republican majority in the House. But his only major legislative accomplishment was a tax cut (which did nothing to stimulate growth). He famously failed to repeal the Affordable Care Act. He never built his wall.

But Trump was very effective at turning his supporters against Republicans he deemed disloyal. Apostates were forced to bend the knee or driven out of office. Ultimately, Trump’s support wasn’t wide, but it was deep and unfaltering.

Biden entered office with a 50-50 Senate and a four-member majority in the House. With no room for error, he passed a massive stimulus and a bipartisan infrastructure bill. But he whiffed with Build Back Better, which after prolonged negotiations collapsed under the weight of Kyrsten Sinema’s ego and Joe Manchin’s coal greed.
That episode exposed Biden’s inherent weakness and the frailty of his coalition. He had no leverage over Manchin or Sinema, nor an inclination toward browbeating. A creature of a bygone era, Biden is playing by the rules of a game that no longer exists; his enemies are swinging brass knuckles.

And unlike Trump, his support is wide but shallow. In 2020, he drew votes across the spectrum, from the center-right to the far left, but he excited no one. He was supposed to be decent and competent, contrasting Trump’s malicious chaos. But shallow support evaporates quickly.

The botched withdrawal of troops from Afghanistan eroded confidence in his competence, establishing a narrative that Biden was in over his head. When Build Back Better flatlined and inflation skyrocketed, that narrative solidified. No matter what happens, it will be hard to shake.

With two more Democrats in the Senate, Biden might be hailed as the second coming of FDR — the president who passed a huge stimulus, expanded the social welfare state, addressed climate change, protected elections from Republican attacks and ensured abortion rights. (There are interesting alternate histories to be written where, say, Florida’s Bill Nelson didn’t phone in his 2018 campaign and North Carolina’s Cal Cunningham avoided a sexting scandal in 2020.)

But this is the hand he was dealt, and he needs to figure out how to play it. Most important is conveying the sense that he has a plan and isn’t simply a victim of circumstances. Half-assed executive orders on abortion and the climate won’t do. Go hell for leather; let the Supreme Court strike the orders down (and further erode its own standing), but don’t act helpless.

That’s not to say this strategy will allow Democrats to defy gravity this fall. George W. Bush was the only first-termer not to lose midterm seats in the last 40 years, and that required manufacturing a war. Even Dubya’s old man, in the middle of Desert Storm, got his ass handed to him.

But it will enable Biden to show that he has some fight left in him. If he plans to be a doormat for the new Republican House — which will, without a doubt, impeach him for crimes real or imagined — or the radical Supreme Court, he should bow out of 2024 now.