The week where Hizzoner Buddy Dyer loved the state of his city while not necessarily minding the rules of campaigning (again). Also, small business is not all business, folks. Businesses are people, too! 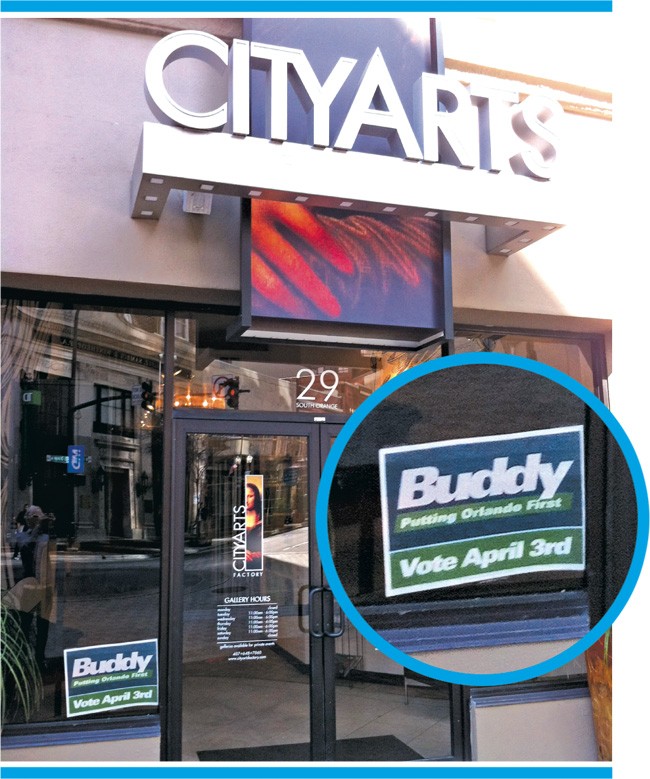 so much time wringing our hands over the national conversation lately that we haven’t even taken a moment to smell the roses of the City Beautiful. Well, thank God for freakin’ Mayor Buddy Dyerlast week, who reminded us that things stink around here, too! It was time for the mayor’s annual “State of the City” speech, or the circumstantial pomp-fest that inevitably ends with the mayor exploding into bits of glitter and candy and amphetamines representing each of Orlando’s numerous, Kevlar-coatedaccomplishments. The state of the city? Awesome, as always.

Now that Dyer is trying to remove himself from his City Hall habitat – we hear he’s probably running for governor in 2014, he denies it – he decided to deliver his personal plaudits from the far-off clime of Lake Nona, mostly so that he could say “I built this (medical) city on rock & roll!” And that he did, with nods to the University of Central Florida College of Medicine, the MD Anderson Orlando Cancer Research Institute, the Sanford-Burnham Medical Research Institute, the University of Florida Academic and Research Center, the Nemours Children’s Hospital and the (delayed) Veterans Administration Hospital setting the stage for a rather antiseptic takeon success.

With such milestones heralded as a “culture of collaboration,” the mayor continued his résumé bullet points with all of the sloganeering you can imagine: SunRail, the Amway Center, DPAC, the Blueprint Office, Main Street districts, crime, cow-tipping and corporate welfare.

“Some critics use inflammatory terms like ‘corporate welfare’ to attack any program that uses tax incentives to support local businesses,” he said. “To them I would say, you are mistaken. We’re not giving businesses a handout. We are giving them a hand up.”

In other dizzying Dyer news, did you know that he’s up for re-election next month? Of course you did. As it does every time there’s a municipal election, an ugly scandal has reared its ugly head just one month out from the April 3 city elections. Two of Dyer’s challengers, Mike Cantone and Ken Mulvaney – joined by perennial candidate-for-anything Lawanna Gelzer, who is now running for Sam Ings’ District 6 commission seat – announced their intent to repeat the chaos of 2005 by accusing Dyer and Ings of having their campaign staffers illegally request absentee ballot forms on the behalf of some voters. Voter fraud! Though most of the media (and the officials the media talked to) dismissed the outlying candidates’ claims as somewhat frivolous, it’s hard to deny the scent of money in the air; Dyer does, after all, have a boatload of money and a Super PAC on his side. But wait, there’s more!

According to documents obtained by the Orlando Weekly, Dyer shot a campaign ad featuring kids and their parents on Feb. 4, which doesn’t sound so bad on the surface. But considering that the kids and parents involved would be students of the Central Florida Leadership Academy and the city’s own After-School All-Stars program, it sounds a little fishier. In 2010 the city struck a deal to move the Central Florida Leadership Academy into its current home on Primrose Avenue – and moved the previous tenant, Florida Safety Council, into the building OW calls home on Colonial Drive – at a cost to taxpayers of some $200,000 for breaking the lease. Between that and the even less tenuous relationship between the city and the All-Stars, a city-funded after school program, there’s certainly the appearance of a quid pro quo here. (Dyer’s campaign did not return calls for this story).

And then there’s the issue of the presence of Dyer campaign signs on presumed city property. This one’s hilarious! We caught wind of campaign signs posted at the entrance of downtown’s superfluous CityArts Factory – which was funded to the tune of $1.75 million by the city and county between 2006 and 2009 and currently receives $125,000 a year via the Orlando Community Redevelopment Agency downtown taxing district – and decided to run down and check it out. Sure enough, we saw the sign right at the front entrance and snapped a photo, walked around the corner to see if there were more, then returned only to find that the sign had been removed.What?

“One of our patrons put them up and they’re really big donors, but when I saw you taking pictures, I called the campaign office and they said it probably wasn’t a good idea,” reveals Downtown Arts District Executive Director Barbara Hartley.

City spokeswoman Cassandra Lafser says that all city leases – including that of CityArts Factory, which is effectively just a sublease – require tenants not to have political collateral in their windows.

“As soon as we knew, we asked them to take them down,” she says, not knowing that we actually saw the sign disappear. “We are proactively reaching out to our tenants now. We are reiterating that piece of the lease.”

Orange County Supervisor of Elections Bill Cowles says that while he didn’t think there was anything patently illegal about Dyer’s apparent commingling with his own city resources for campaign purposes, that doesn’t change the appearance of impropriety.

“As you know, perception is the biggest thing that we deal with,” he says. “People’s perceptions of what’s right or wrong.”

We then reached out to the normally quiet City Commissioner Phil Diamond, who is quietly running for Dyer’s vaunted seat, for a more dynamic response.

“It would be nice if you could walk by a polluted lake, take a picture and all that pollution would be gone,” he laughed, adding (with all due outrage), “I think it’s reckless and irresponsible for the mayor and his staff to encourage charitable organizations and nonprofits to engage in improper activity that is against the rules.”

Pulling our head out of Dyer’s ass for a minute, on Feb. 29 a new working group formed by the perpetual hellraisers of Organize Now, called the Community Business Association, held a small press conference – so small that we were the only press there – to release a new report titled “Taking the Pulse of Florida Small Businesses.” The obvious logic behind the report is to expose the feelings of real business owners outside of the “corporate influence” of groups like the Orlando Regional Chamber of Commerce. Among the findings culled from face-to-face interviews with 103 small business owners, mostly from Orlando and its surrounding communities: Most businesses want more customers, not fewer regulations or lower taxes; 70 percent agree that large corporations should pay higher taxes than the, uh, non-taxes they’re paying now; 72 percent claim that the foreclosure crisis is wrecking their businesses; an overwhelming majority support health-care reform, largely because more than half of them don’t have any health insurance for themselves or their employees at present.

“Conservatives tend to fetishize this idea of business people,” says Fred Barr, a small businessman who owns Barr Creative Services. “If we become visible and share our sensibilities, maybe some people will come out of the closet. This is a chance to depoliticize things.”

Can we just depoliticize everything now? We’re getting tired of wringing our hands.