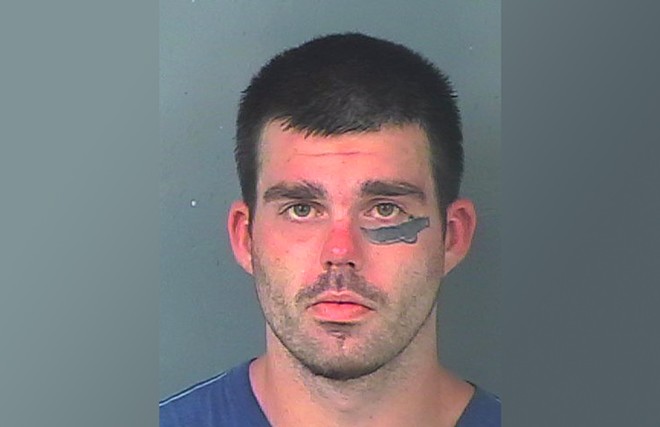 The Hernando County Sheriff's Office released the arrest photo and report of a man charged in a machete attack that took place on Saturday.

Though Orlando Weekly usually declines to publish mugshots of people who have been arrested, the booking photo of 25-year-old defendant Justin Arthur Allen Couch reveals that a machete is tattooed prominently on his face.

Police said in the post that Couch was attending "a gathering" in the victim's residence on Monday afternoon, when he confronted the victim as he returned home. The two men stepped outside and witnesses told police that "Couch produced a machete and approached the victim in an aggressive manner," telling the victim to leave his own home, with his wallet and cell phone inside.

"There's nothing here for you, leave," Couch told the victim, according to the police report. When the victim tried to get back inside anyway, he says Couch began hitting him in the arm and leg with the flat side of the machete, before swinging it at his face.

The victim says he tried to block the blade with his left arm, which was struck by the machete, causing the victim to pass out. Couch then took the victim to an unknown friend's house, who then took him to Bayfront Health Spring Hill, where he received treatment for his injuries.

"The victim is currently unable to use or move his left hand due to the severity of the injury he sustained," says the report. Couch was arrested Tuesday afternoon and charged with aggravated battery. His bond was set at $10,000.
_
Please follow CDC guidelines and Orange County advisories to stay safe, and please support this free publication. Our small but mighty team is working tirelessly to bring you news on how coronavirus is affecting Central Florida. Please consider making a one-time or monthly donation. Every little bit helps.