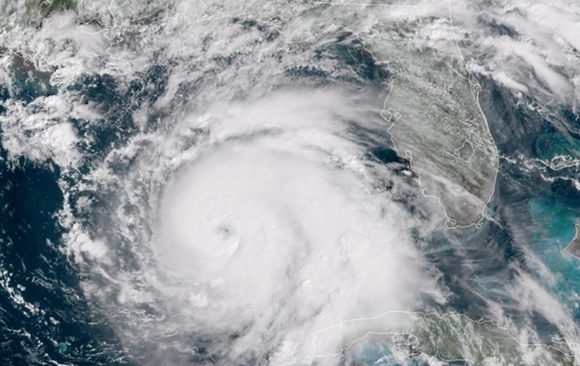 Photo via NOAA
Florida Democrats are suing the state to extend the voter registration deadline until Oct. 16 because of Hurricane Michael.

The last day for voters to register in Florida for November's general election is Tuesday, Oct. 9. The Florida Democratic Party filed a complaint for emergency relief in the U.S. District Court for the Northern District of Florida against Secretary of State Ken Detzner.

"Thousands of eligible Florida voters who are complying with evacuation requests and preparing for the storm may not have the opportunity to register to vote as a result of Hurricane Michael," FDP chairwoman Terrie Rizzo said in a statement. "Governor Scott and Secretary Detzner have failed to adequately protect the rights of these eligible voters, and should extend the deadline one week in light of Hurricane Michael."

The Category 2 storm is projected to severely affect Florida's Panhandle and the Big Bend region on Wednesday. As people were ordered to evacuate from the area, Scott closed state offices in 35 counties.

"Hurricane Michael is a massive storm that could bring total devastation to parts of our state, especially in the Panhandle," Scott said Tuesday morning. "Think about destruction we’ve seen before with storms like Hurricane Irma. Hurricane Michael poses a deadly threat."

Detzner announced Monday that county Supervisors of Elections whose offices are closed on Tuesday can register voters on the day those offices re-open with paper applications. But the Oct. 9 deadline to register online remains in effect until 11:59 p.m. on Tuesday.

When asked about the lawsuit, a spokesperson for Scott's office says the governor is "focused on keeping Floridians safe as a major hurricane rapidly approaches our state."

"Last night, the governor directed the extension of the voter registration deadline for Supervisors of Elections who are forced to close because of Hurricane Michael," spokesperson John Tupps says in a statement. "This means that each county will have the same amount of days to register voters. The governor believes that every eligible voter should be able to register to vote and Floridians can go online right now to do so. In fact, nearly 10,000 people have registered to vote online since midnight."

Detzner's office says so far, more than 40,000 people have used the state's website to register or update their current registration in the past week.

"Although the Secretary has proposed a single-day registration extension
in some counties to accommodate a subset of voters affected by Hurricane Michael, his 'solution' is insufficient and confusing," the FDP argues in its lawsuit. "It does not adequately protect the voting rights of Florida citizens who cannot register to vote by the Oct. 9 registration deadline. … Voters will face significant hurdles to registration because of the disruption caused by Hurricane Michael. Voters attempting to register online may face internet outages due to the storm."