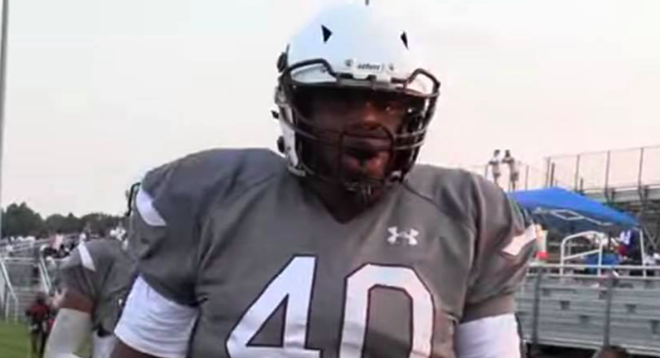 Facebook/Tyre Sampson
The father of the 14-year-old who died after falling off of Icon Park's freefall tower ride found out when video of the child's horrific fall spread on social media.

The child, who been identified as Tyre Sampson of St. Louis, fell from the ride as it dropped on Thursday evening. He was taken to an area hospital and passed from his injuries. Sampson was in Orlando on Spring Break. His father, Yarnell Sampson, said he learned of the terrible accident online.

"I wish I was there to tell him I love him. That I’m sorry. For him to lose his life. So young, and I wish it was me," Sampson told WESH. "I want to know what happened to my son. I want to know why my son is in a white bag, having to get shipped back home. He walked there. Why he can’t walk back? I want answers from everybody. Who all was involved in that?"

The younger Sampson was 6-foot-5 and over 300 lbs. He was considered a talented football prospect and was weighing his choice of high schools. Tyre was in Orlando for a week-long football training camp while on Spring Break from his Montessori school in St. Louis.

"It felt like somebody hit me so hard in my stomach. I just lost, I lost, lost wind. And the pain behind it could never be taken away, and sorry's not gonna take it back and no monies, no nothing in the world to replace the young man. And it's just sad, a young man's bright future was taken away from him over a ride, an amusement park," Sampson said.

Yarnell Sampson has called on prominent Orlando attorney Ben Crump to represent him in upcoming litigation against the park. Tyre's mother is being represented by Texas attorney Bob Hilliard and the pair are working together on the case.

NEWS ALERT: @AttorneyCrump and Bob Hilliard have been retained to represent the family of Tyre Sampson, the 14 year old who fell to his death from the drop tower ride at Florida’s ICON Park. pic.twitter.com/q8uGdy3ExM

"This family is shocked and heartbroken at the loss of their son," Crump shared in a statement. "This young man was the kind of son every parent hopes for — an honor roll student, an aspiring athlete, and a kind hearted person...A fun theme park visit with his football team should not have ended in tragedy."